The IPCC had told us that the Himalayan glaciers would be gone by 2035.

The notorious verbal Marxist guerilla group later admitted that the figure 2035 was created by permuting digits in the figure 2350 which was casually mentioned in an interview with a random mediocre alarmist as the earliest moment when the bulk of the glaciers in the Himalayas could be melted. 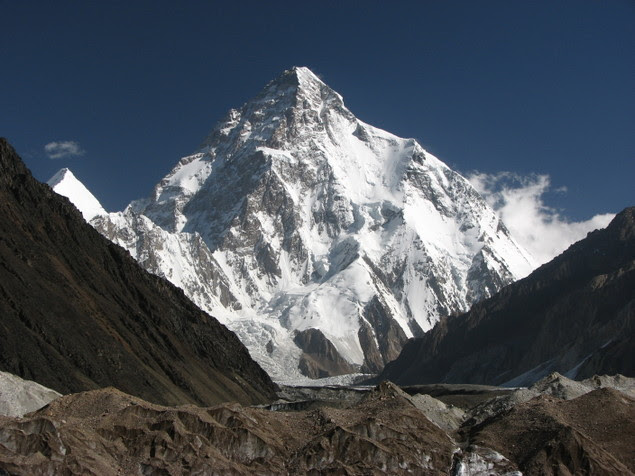 However, the reality could be and probably is even less alarming than the least alarmist proclamations by any alarmist you can find on this planet.

Some MSM sources failed to hide a new paper that reconstructed the ice volume in the Himalayas between 1999 and 2008 and found a slight increase of ice which was actually quite rapid near K2, the world's mountaineers' greatest challenge and the second highest peak on Earth depicted on the image above. These particular advancing glaciers also lowered the global sea level, although just by 0.01 mm per year.


A few titles that introduced the story in recent 24 hours:


Most importantly, I should offer you the link to the actual paper in Nature Geoscience:


I don't want to talk about it much – it's just some measurement of some quantity at a random place of the globe that is interesting mostly because of its unusually high elevation. The headlines are funny: the glaciers are "renegades" who should probably be burned at stake together with other "denialists" in order to speed up our struggle against global warming, whatever it is supposed to mean in a world fighting global warming in which even glaciers may become "renegades".

Only people ignorant of basic facts may be surprised

But I still want to say one more serious thing: the surprise that one can find big glaciers that are advancing in a decade is just stupid. The people who are familiar with the basic data concerning the trends know that thirty percent of weather stations have recorded a cooling trend (via linear regression) in their whole history which is 80 years long in average.

So the "warming" isn't global. As all people who haven't been brainwashed by lies about "climate change" know very well, we only observe a slight asymmetry between the places that have warmed in the last 80 years and places that have cooled during the last 80 years. Most of the temperature changes are just noise. The very weak signal can only be extracted if we average over a long period of time and a large number of station. If any of these two conditions fails to be met, we observe noise again.

During the 80 years, the percentage of stations with a negative slope is thirty percent. It's natural to expect that the same will be true for the proportion of world's glaciers that were advancing in the last 80 years or so. If we only look at trends in a decade, the trends may be much more affected by the short-term noise and the percentage of advancing glaciers may be even closer to 50% i.e. to the percentage of the retreating glaciers.

There are still many people – I would say that even many self-described skeptics – who really believe that there is a meaningful trend with a monotonic sign that may be attributed to every year and every place of the globe. However, this ain't the case. Only a single figure per globe and per 100-year-like history is able to show something that could be called a signal.

Those people effectively confuse the two quantifiers. What is probably true about "global warming" is that if we average the temperature over the whole globe and check the graph of this global mean temperature over the last century, we get a positive trend that may be distinguished from the noise, although only at a 3-4 sigma level (the trend is 0.7 ± 0.2 °C). So the "warming" is "global" in the sense that we only need to talk about the global average to actually see some signal.

However, some people misinterpret the term "global warming" by saying or thinking that every place of the globe has actually experienced the positive temperature in the last 100 years which ain't the case. Needless to say, the confusion between "the average global temperature was increasing" (probably true) and "the temperature was increasing everywhere i.e. globally" (definitely false) is the kind of elementary ignorance spread in between the laymen that the global warming alarmists nurture as much as they can.

I have already said it but if the alarmists were honest, they would rename the term "global warming" as "slight detectable asymmetry in the percentage of places that have displayed a warming vs cooling trend that may only be seen if one looks at timescales comparable to a century and averages regions of globe whose size is comparable to the whole Earth but that disappears if either of the conditions isn't met".

In the same way, "anthropogenic global warming" should be renamed as a "hypothetical contribution of the mankind's activity to the slight detectable asymmetry in the percentage of places that have displayed a warming vs cooling trend that may only be seen if one looks at timescales comparable to a century and averages regions of globe whose size is comparable to the whole Earth but that disappears if either of the conditions isn't met."

The Reference Frame urges all journalists to correct the most flagrant type of demagogy included in the amazingly oversimplified slogan "global warming" and replace the two words by the still oversimplified but acceptable sequence of words described in the last two paragraphs. It's plausible that the number of people who are able at least to memorize my sequence is low but that's how it should be. The people who can't understand and reproduce these words shouldn't talk about the climate because they know nothing about it and the climate change contains nothing interesting that would be of interest for them.

Jeffrey Epstein, a billionaire who instantly paid $100,000 to string theorists in India after this group was evaluated as the best environment for a scientific investment (in insights per dollar) in a discussion between Larry Summers and Andy Strominger during a Society of Fellows dinner I attended and who was celebrated by TRF has screwed everything.

Market Watch has revealed that he has paid for a Universal Doomsday Conference. It's clear why he wants to promote the idea that there may be a doomsday right behind the corner: such a prediction may lead to the "enjoy the last moments of your life" thinking which may legitimize his paid sex with young girls.

Participants included a Lawrence Krauss, a "Shwoit-Shmolin Lite" or "Physics of Star Trek-specialized" bullshitter about science who doesn't hesitate to promote the most pornographic parts of the pop science dumping ground so he has covered the climate change doomsday, too. For the sake of the clean environment, I urge Mr Krauss to eat and recycle his verbal feces he is routinely using to cover rooms across the globe.
Luboš Motl v 8:45 AM
Share