I can change your mind about climate: TV

I have just watched the one-hour Australian ABC1 TV program, I can change your mind about the climate, and it's fun. You should watch it, too:


Veteran liberal (right-wing) politician Nick Minchin did a very good job and the young climate activist Anna Rose was as charmingly naive and believing as I expected. In fact, I was feeling sorry about her. It's clear that if she learns the truth, i.e. that there is no threat or problem linked to the climate, she will lose a favorite toy, a meaning of her life, her career.

(BTW see also a fresh insane EGU 2012 press conference with Mann, Hansen, and one more, Michael Ghill of UCLA. Thanks to Willie.)

So she was desperately trying not to learn anything for several weeks and I think she has succeeded.


The program showed lots of people and places I know very well. They visited the house of Jo Nova and David Evans. The atmosphere was a bit tense and unfriendly over there but the Australian skeptics were ready and presented some climate issues in a very concise way. Then they visited Richard Lindzen's house in Greater Boston – that I have been lucky to visit, too. It has also been funny to see the journey of the train through Boston and New York through Stamford, CT etc. – I know this train rather well, too.

Lindzen was explaining feedbacks, the guaranteed absence of the strong positive ones and the likely dominance of the negative ones. Anna Rose told him that in order to quantify the feedbacks and who is right, she has to measure the credibility. And the right way to determine the credibility of Richard Lindzen is to point out that he's paid to spread lung cancer by denying that the passive smoking is harmful. Well, I am not sure whether passive smoking is harmful but I am certain that her "argument" is both comically irrational and off-topic as well as infuriating.

Anna Rose has brought Nick Minchin to some unmemorable alarmists who were painting the green Earth and saying some ludicrous things about the climate. It was much more important when Minchin brought Rose to the Capitol Hill and they met Marc Morano. He said many assertive sentences that made lots of sense but before he did so, we learned that Anna Rose was shocked that Nick Minchin would dare to associate himself with someone like Marc Morano. Well, most people who think about these matters – including folks like Dick Lindzen himself – don't have any problem to associate themselves with Marc Morano. Marc may be tough but he is right. The apparent fact that Marc Morano is taboo in Anna Rose's organization only highlights how immensely detached from reality her organization is. Marc has done a tremendous job in making Americans think and communicate about the climate issue and a measurable part of the drop of the climate panic in the U.S. may be attributed to him.

They also visited Richard Muller at Berkeley who was once again painted as a former skeptic, something that isn't really a valid description of his attitudes. Quite generally, the narrator has said many things that made it clear that he is an alarmist, despite the attempted "balanced structure" of the program.

They videochat with a sociologist who says something about the people's attitudes and what they're affected by. Then we see Bjorn Lomborg riding his bike in between trucks in the New York City. Anna Rose apparently doesn't know who Bjorn Lomborg is so when Minchin says that he kind of accepts that the globe is warming, she happily screams Yay! Normally, such screams would be a part of a satire but she is probably as serious as an evangelist who hears about a new sheep led by Mr Jesus Christ. Lomborg was marketed as someone who agrees with Rose on the science but with Minchin on the solutions. We're not burning carbon to make Al Gore angry, he said; we do so because we love the things that the fuels allow us to do. He wants to spend the money on research of green energy. I know that such clichés are popular among some folks but they contain 50% of the stupidity of Anne Rose, too. Still, she's unsatisfied and says that Lomborg's recommendations are "incredibly risky". It's OK to pay for research but we have to destroy the industrial civilization immediately nevertheless! ;-) Blessed are the poor in spirit.

In London, Rose shows a British Tory alarmist politician to Minchin but I don't think that he says or knows something interesting. It's probably just about his existence. Some comments about countries paying resources for green energy. In Climategate's East Anglia, they visit Mike Hulme and say that he is doing policy and not science these days. Hulme correctly points out that the real persistent conflict is a conflict of values, different interpretation of some data, and not the science itself. They also discuss some problems affecting some countryside; I didn't understand what the claims were.

At the end, they announce that they burned 30 tons of carbon emissions, show some pretty coral reefs, and Minchin and Rose discuss whether they should get married so that Minchin could offer his experience to the climate hysterics movement. People don't have to agree about everything but they have to agree that we must do everything that the alarmist loons propose. Yes, that's how this "neutral" program ends. ;-)

So I filled in the survey (second round) with a "dismissive" result again. (Minchin only got "doubtful".) Nick Minchin summarizes the experiment by writing that they tried to change his mind but he is still a skeptic. ;-) See Google News for other responses to the program.

Text below was originally posted on April 22nd

ABC1, an Australian TV channel, is planning to air


I can change your mind about... climate


on Thursday, April 26th, 8:30 pm. You may click on the link above and check the trailer as well as the results of a poll about the attitudes concerning global warming. 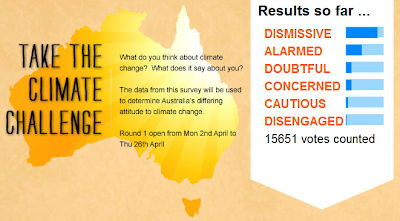 When I was taking the screenshot, and yes, it was before Anthony Watts or any reader of his blog knew about the poll, the "dismissive" group (including your humble correspondent) was covering 52% of the respondents. The number of alarmed respondents is more than twice smaller. That's not a great gift to Vladimir Lenin who celebrates his birthday today (the so-called Earth Day).

If you live in Australia, and even if you don't, you may participate in the survey, too.

The three-minute trailer suggests that the program will try to be a little bit more impartial and objective than some propaganda documentaries we have seen in recent years.

A skeptical older man (conservative political veteran Nick Minchin) and a panicking younger woman (a naive apparatchik from a youthful climate NGO Anna Rose) will try to change their mind. For the man, it also means that he will first try to raise her IQ by 30 points or so. Even if he were perfect, which I doubt, it would not be an easy job.

They traveled to many places of the world and paid no attention to their carbon footprint. They semi-peacefully argued about the impact of passive smoking, too.

The Age recorded a video commentary by two guys who say how nice Anna Rose is and how dangerous it is to interact with climate skeptics. That's a very curious conclusion in general, especially if you think about the likes of Steve Zwick of Forbes who urges to burn the houses that belong to the "denialists". ;-)

How did skeptics respond? Warren Meyer of Forbes replied that he wants to improve the quality of the debate so he will avoid the term "alarmist" in the future. Imagine: Zwick wants to burn Meyer's house and Meyer replies in a way that Jesus Christ of Mahatma Gandhi wouldn't have to be ashamed of.

Meyer also proposes a better solution than burning the skeptics' houses. They will be offered to the people concerned by climate change for their houses near the Californian beaches: the concerned ones will be fully protected against the rising sea level. I also offer my apartment in a concrete block 340 meters above the sea level for a Californian villa that is just a few meters above the sea level which will be submerged in a few years. It's a deal you can't refuse! ;-)

Of course, I have absolutely no problem with allowing a concerned person to present his or her views about the climate. After all, you know very well that we did it two weeks ago. Well, one of the reasons I am not afraid is that the more these folks speak about details, the more obvious it becomes that they're completely irrational and they don't actually know how the climate works – and even how very general and important other things work in the world around us – and it becomes more clear to many more people that these activists have opinions that are not shaped by the neutral scientific method but by some preconceived emotional, political, ideological goals.

"If I wanted America to fail": the other side also produces propaganda films such as the film above. The only difference is these films are true. Shot by Free Market America.

Meanwhile, Pierre Gosselin talks about the new European CarbonSat satellite that plans to monitor CO2 and CH4 spectral lines at every place of the globe and hunt down the climate violators anywhere on the globe by 2017. So in 2017, be careful not to fry a sausage on an open fire and don't try to breath too much, unless the EU authorities know that what you're using the extra air for is to sing and praise these authorities. Via climatedepot.com.
Luboš Motl v 2:52 PM
Share