Bobby Samir Acharya, Gordon Kane, and Piyush Kumar have been invited to write a review for International Journal of Modern Physics A about their picture of particle physics beyond the Standard Model:

On 30 pages, they explain what they consider typical predictions by string/M-theory for (relatively) low-energy physics.

Gordy was kind to tell me (or to confirm my interpretation) how their notion of "genericity" differs from that of the KKLT-like anthropic advocates. One could say that Kane et al. focus on natural classes of vacua in which a majority of the elements has certain phenomenologically attractive qualitative properties and then they look for other prevailing properties of these classes.

If you see a Wolfram Mathematica animation above (click for details), it actually means that you have downloaded 5 MB from a server. The Internet got much faster, right?

The anthropic enthusiasts, on the other hand, would look at the most populous classes, whether or not they contain a significant percentage of vacua with viable characteristics. That means that they have to choose very special or "unlikely" representatives of these large classes which Kane et al. (and many of us) consider fine-tuning.

(Well, I still think that some of the hierarchies and small parameters we observe are due to some non-genericity of our vacuum which could also imply that 4D SUGRA isn't the right framework for describing some portions of particle physics, as in bottom-up local F-theory models. Gordon provided me with some partial answers to my concerns.)

At any rate, the scale of (gravity-mediated) SUSY breaking is high as in gravity mediation; gauginos may be (in the case of the non-thermal WIMP miracle) but don't strictly have to be below 1 TeV or so; sleptons and squarks are at a multi-dozens-TeV scale so out of the LHC reach; the Higgs mass around 125 GeV is predicted out of tan(beta) around 10 and you're never too far from 125 GeV, anyway. If the gauginos are light, direct production of the gluinos will dominate new physics; if they're heavy, there won't be any new physics besides the Higgs boson seen at the LHC.


They demand the tree level cancellation of the vacuum energy and assume that the more detailed and precise calculation occurs but doesn't constrain particle physics (the smallness may arise from sampling a large number of possible arrangements of some hidden sectors). The tree-level step in the cancellation of the C.C. remarkably seems to lead to similar conclusions as other cosmological constraints.

Not to contaminate the early stages of the cosmological evolution, the moduli have to be at least at the multi-dozens-TeV scale, close to the gravitinos, and by using four-dimensional supergravity, the scalar superpartners are not far from that, either. It means that if the scenario by Kane and friends is right, the rumors about the stop squark should be unsubstantiated.

Dark matter may be composed both of axions and WIMPs (the latter is approximately the neutral wino); they may even give comparable contributions to dark matter. If gauginos are heavy, dark matter is purely made out of axions.

Cho called Raphael Bousso and Leonard Susskind who told him that Hogan's noise has nothing to do with the holographic principle and attempts to find it experimentally won't have any implications for the validity of the holographic principle. Leonard Susskind also used another assertive method to explain to Mr Cho that he is hyping rubbish: Lenny hanged up the phone as quickly as possible. ;-)

Your humble correspondent of course agrees with these particular comments by Bousso and Susskind. I am just sorry that when a journalist from a similar magazine called me to learn about the Bousso-Susskind ultrahypermultiverse, I hadn't used Susskind's pedagogic method and wasted an hour with polite conversations about this nonsense, to no avail.

Veronika Jeden Hubený and Mukund Rangamani submitted an interesting preprint trying to find the region in the bulk that may be reconstructed from a region on the boundary. All kinds of diamonds and their extrapolations and intersections are considered and they finally end up with some "entropy bound-like" statement that seems a bit weak (and upside down). They also seem to suggest some tension of their conclusions with Mark van Raamsdonk's geometric holographic interpretation of the entanglement but I haven't been able to understand what the hypothetical contradiction is supposed to be because they ask somewhat different questions.

Off-topic: an hour ago, the orbit refused to grant a North Korean satellite asylum. Proletarians of all countries are trying to find out where the comrades from North Korea made a mistake. ;-)

My hometown of Pilsen, a European capital of culture for 2015, is exploding with construction, deconstruction, and design activity these days. After 25 years, the demolition of the socialist [Inwest] Culture Palace (nicknamed "The House of Horror" by the local citizens) has begun. Pilsner people have simply been too conservative for that. Here is how it looks after a few days of a gradual demolition:

See gallery (14 pix). The building will be replaced by Amadeus OC Arena, mainly a mall.

A new theater will however be built by the Portuguese near the Plzeň Plaza mall, a mall launched by the Israeli 5 years ago, which itself stands on the former place of socialist exhibitions, Ex Pilsen.

To make things more thrilling, Pilsen is considering the doubling of its main symbol, the St Bartholomew Cathedral. Do you know what is strange about the picture below? 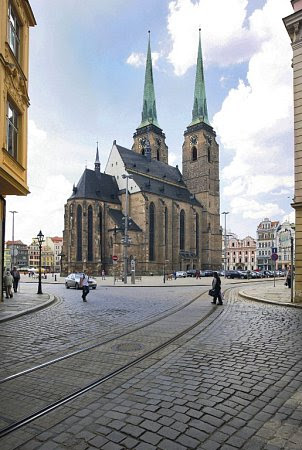 Well, it has two Pilsner Towers, not just one. ;-) The Pilsner Tower, at 103 meters, is the highest church in Czechoslovakia and slightly beyond. The reality is that two towers may have been a part of some very early plans but they never existed and we were never close to having two of them. I think it's a fun idea. The not too orthodox co-existence of industry and modern technologies with some old background is what Pilsen is all about. I would build lots of such structures designed by old architects (who no longer want to be paid) with lots of the most modern infrastructure inside them.
Luboš Motl v 8:05 AM
Share