I think that my ex-colleague Andy Strominger is not only a top physicist but also a captivating speaker. This talk he gave at Berkeley in March 2012 confirms it. 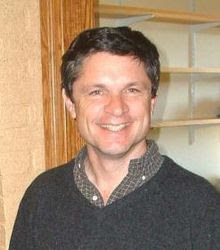 Click the picture above to try to play the MOV video. You may need to install QuickTime/iTunes if it doesn't work for you.

After a minute spent with a different colloquium at the following week (whose title was in Latin), Andy Strominger quickly jumps to his main point.


In the early 21st century, black holes seem to play the same universal exploratory role in physics that the quantum harmonic oscillator used to play almost 100 years earlier. The reason of their universal importance is that they're the simplest and the most complex objects in the Universe at the same moment.


It sounds almost like poetry but it's actually true although one needs to appreciate many aspects of black holes that general relativity, its semiclassical quantization, and later string theory discovered to appreciate the depth of the summary above.

Andy has a certain time to communicate these insights. Expect some funny cartoons. In this talk, he tries to focus on the non-stringy aspects of black holes although it's not quite possible to avoid string theory.

Schwarzschild found an explicit solution, died, and while a solution usually means the end of the story, it was just the beginning for black holes. In particular, Einstein had no idea what Schwarzschild's formulae meant even 25 years later. After some developments, John Wheeler coined the term in 1967.

Rapid progress came in the 1970s. Candidate black holes in the skies appear – we know that they're black holes today. One of them sits at the middle of the Milky Way. Equally importantly, theory made progress. Analogies of black hole quantities with thermodynamic ones were suggested and justified. The horizon area looked like – and was – entropy (both are non-decreasing). The surface gravity acceleration looked like – and was – the temperature if you use appropriate units.

The thermodynamic and black-hole laws are analogous but they should really be unified. So the black hole entropy must count the logarithm of the number of microstates. Of course, Andy is gradually getting to the discoveries that made him and Cumrun Vafa famous (among the people who have a clue about modern physics). In early 1996, the correct, expected entropy was finally derived by these two men from microscopic, statistical physics, sparking progress in string theory, initiating the AdS/CFT correspondence, and so on.

Today, Andy has a hindsight and he believes he has arguments that the calculation had to work exactly. Any consistent quantum theory of gravity had to produce the right entropy, for "macroscopic" reasons. The reasons may be summarized by the keyword "universality" that hasn't betrayed us so far. Much like the ultraviolet catastrophes of the 19th century – which were resolved by the periodic table but the details of the table were irrelevant for the existence of the solution itself – gravity also leads to its ultraviolet catastrophes.

In this analogy, Strominger and Vafa had to construct the periodic table first and go to statistics after that. The first step may also be skipped if you want to rely on general principles only.

He switches from black holes preserving supersymmetry to some real ones, especially the extreme rotating (Kerr) black holes that may already be treated by analogous methods ("explicit stringy calculations without strings") even though they may also be observed in the telescopes. A couple of papers by Andy and collaborators in recent years.

At the equator of the horizon, the extreme rotating black hole requires that you rotate around by the speed of light if you want to stay at the horizon. Near the horizon, we equivalently study low energies and we find out that the theory describing the excitations is conformal; the conformal symmetry is inherited from the diffeomorphisms in general relativity. One may calculate the central charge ("effective number of degrees of freedom") of this theory as well as the "energy" and the number of microstates is therefore determined (by the so-called Cardy formula) even though we don't have to know what the conformal field theory exactly is. So the Cardy formula is identified with the Bekenstein-Hawking formula; both of them are effective, macroscopic, universal formulae.

This identification is an example of a holographic relationship which itself is an example of a duality, an equivalence between seemingly complex and seemingly simple objects and processes. They're established in string theory; the jury is "still out" whether these methods also solve difficult questions in the physics of solids and liquids etc.

The last 9 minutes are dedicated to string theory that is working behind the scenes here. Andy wants to puts his two cents in – say something about the general comments on string theory and its meaning that have been publicly misinterpreted. He starts with the history: in the 1970s, it was found to be a solution to a mathematically well-posed problem of reconciliation of gravity and quantum mechanics – still the unique solution today.

In the 1980s, it was realized that it has the building blocks to describe all matter and forces we know in Nature. In the 1990s and the 2000s, it's grown in various directions.

Strominger ends up with his favorite "middle ground". String theory is neither a theory of everything, neither theory of nothing. It is a theory of something. Some things about its relationship to Nature are known, some things are not, but it's clearly telling us something. He mentions an analogy with Yang-Mills theory before its right implementations were known. Andy presents a mediocre report card with lots of A,B,D,F grades and no C's. ;-) People disagree whether it's a passing or failing report card.

Well, the first grade is "it hasn't been ruled out as a complete theory of Nature" where string theory got an A and it's a damn difficult subject because the Universe is a difficult place. No other theory has passed this exam. Unambiguous testable predictions get an F, potential LHC signals D, black hole problem B, applications to pure maths A, inspiration for other fields of physics B, unification A, uniqueness D, cosmological constant problem F (Andy would give an F even if the anthropic principle is right because string theory doesn't have much with it), describing the birth of the Universe D, solving renormalizability problem A.

So decide whether the report card is passing or failing but don't forget that it's the only pupil in the class so if it is failed, the school gets shut down. ;-)

The rest of the iceberg and twists and roads are ahead of us.

Then he says there isn't any computation in the theory, just a hope for a computation. Andy told them to compute 1-loop corrections to anything. 30 years ago, they said they would have it in 2 months but they still don't so at some point, the "loop quantum gravity" doesn't mean very much. (LM: I would say that we can actually prove that there can't be any well-defined 1-loop computation in their framework.)

The second man asked something about the measurability of gravitational fluctuations around horizons of black holes in the hydrodynamics-GR duality. I didn't quite understand the question. The answer was Yes, one may measure how the horizon evolves.

A woman asked a silent question that made Andy talk about the Gromov-Witten invariants. They count some curves. There are Donaldson-Thomas invariants, too. String theory relates them in a way that is morally analogous to the Fourier transform but is much deeper.

A man presented a relatively silent, long monologue about Newton and Einstein etc. which was supposed to be about string theory. Andy kindly answered "sounds good to me". :-)