Brontosauruses' flatulence: as much methane as civilization

An estimate of warming caused by their digestion

Brontosaurus was a herbivore dinosaur with a very small brain and a large body which arguably made it the largest animal that was ever walking on the Earth. The newest official name is Apatosaurus. 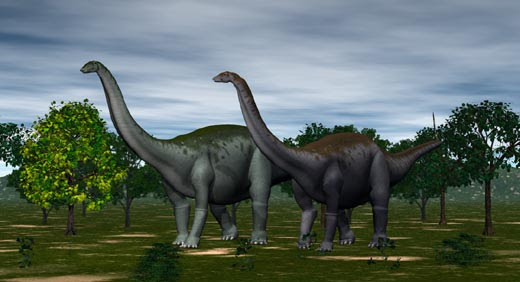 In socialist Czechoslovakia, the term "Brontosaurus" was perhaps even more widespread and well-known than the word "Dinosaur[us]" itself. And most people who knew both words didn't know that the B-word was a subset of the D-word. Why was it so?

Well, I think that the main reason was that it was featured as the largest animal in the Journey to the Beginning of Time movie about the boys who visited the ancient geological eras. Around 52:45, they describe the Brontosaurus (don't forget to turn the English subtitles on) as the greatest catch of their expedition and probably the largest ever animal on Earth.

Equally importantly, the Nedvěd brothers – two of the main icons of the Czech folk and tramp music (especially one of them) – founded the band called "Brontosauruses" ["Brontosauři"] in 1972. Among dozens of songs, Stánky is quite possibly the most well-known one. The vegetarian, victimist character of Brontosauruses has made them kind of compatible with the environmental movement and the communist regime, too.

But that's obviously not what I wanted to talk about. Instead, I want to say a few words about the research promoted by BBC and others and claiming that

Some British researchers have estimated the population of the Brontosauruses and described the digestive system of these 25-ton pets as that of a scaled up cow. With these assumptions, the expected annual emissions from their bacteria-aided flatulence add up to 500 million tons a year. Those folks even say "520 million" which shows their bad taste. They can't possibly calculate the number so accurately that they would know that 520 million is more likely than 500 million. Even if they could calculate it accurately, the emissions were surely not this stable throughout the Jurassic. Their "amazing precision" is clearly bogus, the right result could easily be twice as small or large etc.

At any rate, half a billion tons of methane is exactly what the civilization plus natural sources produce today; about 10% of the figure comes from the cows.

My Heart Skips a Beat, by Lenka Křipáč[ová], an Australian-Californian musician with a Czech name (and dad), shows how detailed physiology was used in the British paper in order to quantify the Brontosaurus' flatulence.

You should note that the 20-year global warming potential of methane is 72 so if you compute the heat trapped by methane over 20 years, those half a billion tons are equivalent to 36 billion tons of carbon dioxide. That's more than 32 billion tons or so, the annual man-made CO2 emissions in 2012!

This factor of 72 is known pretty accurately; it boils down to the absorption by the molecules which we may calculate. The basic greenhouse mechanism is the same for methane and carbon dioxide. The no-feedback greenhouse effect is later amplified or reduced by feedbacks such as the effects of clouds and various complicated processes in the atmosphere. We don't precisely know how much warming a ton of CO2 makes at the end – the doubling probably adds between 0.5 and 2.0 °C of warming – but we do know rather accurately that one ton of methane creates about the same warming as 72 tons of CO2.

I am saying these things because if the Brontosaurus emissions estimate is right, they were adding more greenhouse warming to the atmosphere – if we adopt the 20-year timescale – than the modern civilization. 36 billion tons of CO2 is simply more than 32 billion tons. A difference is that the Brontosauruses kept on emitting these things for millions of years or so while we may only emit something like 32 billion tons of CO2 for a few centuries before we run out of things we may burn.

Of course, what decides about the comparison is the speed with which the excess methane was being absorbed by sinks that existed on the Earth. These sinks helped to decide about the long-term equilibrium concentration of the methane and they don't tell us what it was. But one may estimate those things. Methane's atmospheric lifetime is about 12 years.

So it actually doesn't matter that the Brontosauruses were trying to warm their planets for millions of years. Don't worry, they didn't add a warming by millions of degrees. After a small multiple of 12 years, most of their flatulent efforts were forgotten, anyway. (Incidentally, the atmospheric lifetime of CO2 is variable but usually quoted as 30-95 years, so after 30-95 years, most of the previous CO2 emissions are forgotten. The CO2 concentration only continued to grow for a longer time because the amount of emissions was growing exponentially. But if the emissions growth stopped, the CO2 concentration would stabilize at most within decades, too.) For this reason, their efforts should have created the same greenhouse warming as something like 12 years of our modern greenhouse gas emissions. Not a big deal: it's at most one or two tenths of a degree. Of course, we're assuming that the Brontosauruses were the dominant sources of the greenhouse gases which may be a wrong assumption.

However, if they were substantial emitters, relatively speaking, it's clear that their effect on the climate could have been neglected and they have almost nothing to do with the Jurassic's temperatures being higher than the temperatures in some other epochs. That's why the "warming interpretations" of the research are clearly driven by something else than the actual scientific content of the work – they're driven by the desire to promote the greenhouse effect as an important climate driver.

And if the dinosaurs' made their weather a bit too hot by farting, well, they had to roll with the punches. I just learned about the idiom. By Lenka

Except that we know – and the estimate above showed – that it wasn't an important climate driver in the era of the dinosaurs and we probably know this fact with a greater degree of certainty than a similar proposition about the current age.
Luboš Motl v 11:53 AM
Share