Cap and trade for U.S. water

Hank Campbell of Science 2.0 discusses an unusual new proposal, namely to regulate the amount of water in America's largest water reservoir, Lake Mead, on the Colorado River (whose flow is blocked by the Hoover Dam near the border between Nevada and Arizona) by a cap-and-trade system inspired by the carbon dioxide cap-and-trade system.

Hank reminds us of the utter failure of the CO2 cap-and-trade system – which is admitted even by most of the champions of the climate panic – and extrapolates the insight by saying that it must be a bad idea for water, too. 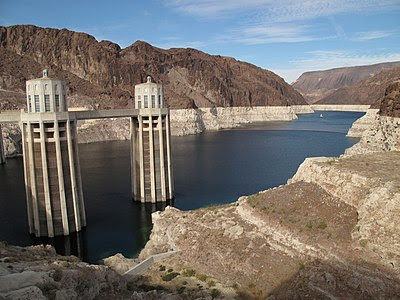 Lake Mead from the Hoover dam. The structures look just like Stanford's Hoover Tower, don't they?

The proposal was discussed by Phys Org, Live Science, and Water Online. While I agree with Hank that the CO2 cap-and-trade has been an embarrassing failure, I am not so sure I agree with him about H2O.


There are big differences between the CO2 and H2O situations. First of all, in the case of H2O, everyone actually knows and agrees about the right sign. Enough water is a good thing. Water costs something and the cost is positive. And we even know what a pretty good and natural "cap" could be.

For CO2, the proponents of the cap-and-trade schemes can't calculate the right level of CO2 emissions. In fact, they were not even able to determine the right sign of the price. While CO2 is at least as beneficial and important as water, the apparatchiks behind the CO2 cap-and-trade schemes have actually assigned a negative price to this gas that we call life. Moreover, this negative price is completely arbitrary and isn't dictated by the markets at the end; it may be changed by the politicians and their new laws about the arbitrary "caps" at any time.

If I return to the case of water, I do agree that there could exist a reasonable level of water in the lake which could be achieved by making people pay the appropriate amount of money which get higher if there's shortage of water and which gets lower or zero if there's enough water. In some sense, I think it makes sense. In fact, I believe that this market system should have been adopted for the Aral Sea and it wouldn't have died if this system had existed. Unfortunately, there was no market and water was for free for the Soviet officials and their economically – and therefore environmentally – unsustainable projects designed to rob Nature in order to compensate for the defects of the socialist agriculture.

Well, I would say that it's common sense that water has to cost something if there's shortage of water. People pay lots of money for bottled water – which is, by the way, largely overpriced and superstitious bulšit as Penn and Teller discuss in their program that happens to be called "Bulšit", too. When they were selling the super fancy French water in the restaurant around 22:22 but go to 21:30 - water called L'eau Du Robinet – and the consumers were so excited, I was rolling on the floor. The translation of the water to English is "tap water" but they used a garden hose and a sprinkler. So yummy for $4.75 a bottle. :-)
Luboš Motl v 8:52 PM
Share