I have discussed \({\mathcal F}-SU(5)\) superstringy models previously. They're based on local F-theory models, flipped \(SU(5)\) grand unification, and no-scale supergravity; each of the concepts brings some attractive or likely features to the model. In November 2011, we talked about profumo di SUSY; in March 2012, it was all about the aroma of squarks and gluinos. 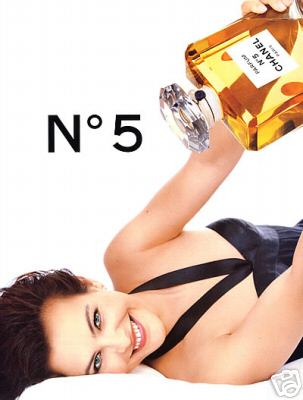 The aromatic authors have added another product to their collection, Chanel Nº 5.

I guess that much like your humble correspondent, you didn't know that it was the world's most famous perfume (for me, the most impressive perfume would be Marrakesh, because of a love story) and the number 5 in the name of the perfume was preemptively chosen according to the number of inverse femtobarns collected by each detector by the end of 2011. You see that the female physicist on the picture above needs a lot of it. The paper by Li, Maxin, Nanopoulos, Walker is called


What do they claim?


They claim that the quadrupled amount of collisions has kept their picture consistent and the signals got appropriately stronger, as expected by their model!

In the previous paper, I was mostly unimpressed by the statistical arguments. The \(\chi^2\) deviation of the measured data from the Standard Model was exactly near the median value so as far as I could say, there was no real justification to look for a better fit. Such a search amounts to overfitting. There's no good reason why the fit of a correct model should be "much better" than the average fit, as given by the noise expected in the experimental data. If you're deliberately trying to make your model closer to the observer data, then you are working hard to describe something that is demonstrably noise.

Give me four parameters and I may interpolate an elephant, von Neumann famously said. With five parameters, the elephant may wiggle his or her trunk.

This complaint of mine got a little bit weaker – e.g. their case got a bit stronger. As Figure 1 in the Chanel paper shows, the deviation of the Standard Model from the data is something like 1.2 standard deviations which is not much but at least, one may start to talk about an excess of events, especially multijet events of certain kinds. Their best supersymmetric fit can achieve a much smaller deviation which is about 2 standard deviations smaller (i.e. closer) than the average – I would still say an unnecessarily overfitted agreement.

The best fit supersymmetric model of their kind that is currently favored has the lightest neutralino mass at \(143\,\GeV\) which could spectacularly agree – if Nature is very kind to us already in 2012 – with the \(130\,\GeV\) gamma-ray line observed by Weniger in the Fermi data. The lighter stop squark mass is at \(786\,\GeV\) and the gluino mass is at \(952\,\GeV\). If this particular point were right, SUSY could be discovered before the 2012 run ends.

Note that the increase of the total collision energy from \(7\,\TeV\) to \(8\,\TeV\) only improves the efficiency for light objects such as the Higgs boson by 10 percent. However, the signal from gluinos around a \(\TeV\) is actually increased two-fold or so!
Luboš Motl v 1:06 PM
Share