Do wind farms cause global warming?

The short version of the article is "Probably Yes". Here is the extended version:

Lots of blogs and media have discussed a paper in Nature Climate Change that has demonstrated a huge warming effect of the wind farms on the regional land surface temperatures, especially at night:

For example, Fox News wrote that New Research Shows Wind Farms Cause Global Warming. This is arguably a true but oversimplified headline but the paper had to be very inconvenient for certain folks because they instantly wrote articles with the opposite title, No, wind farms are not causing global warming (a Washington Post blog) which are equally oversimplified but – unlike the Fox headline – also "more false than true". Compare them with Anthony Watts and Roger Pielke who are both right as well as accurate and careful while interpreting the paper.

Other far-left blogs such as Think Progress were feeling equally threatened by the study. Prof Matt Strassler has also interrupted his musings about a new baryon observed by the CMS detector at CERN to scream that wind farms do not cause global warming.

As the text below will try to explain in some detail, Strassler's claim is just plain dishonest. The legitimate way for him to express the same information would have been "I find it ideologically inconvenient when a published study shows an indisputable effect of wind farms on the land surface temperatures". Why? Who is right?

The authors of the Nature Climate Change article have used satellites to look at the West central Texas as its climate evolved between 2003 and 2010. This place is where some of the world's largest wind farms are located. They found out that the warming trend converted to the usual "units of trend" used at this blog – degrees per century – is as large as 7.2 °C per century in the places with wind farms.

One shouldn't automatically believe the centennial extrapolation of the trend. On the other hand, if the number of wind turbines were continuing to increase in the same way, it can't be excluded that the temperature increase caused by them would be this high. 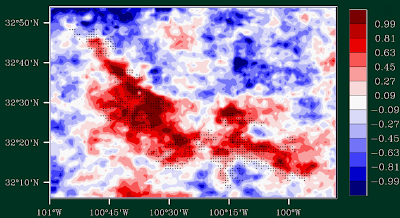 As the picture above (approximately a 1-latitude-degree times 1-longitude-degree rectangle somewhere in Texas) shows, the correlation between the places with wind turbines (the little dots in the grid are actually "plus" signs and indicate that there's at least one wind turbine in the pixel) and the places that have experienced warming seems amazingly accurate in this area; a comparably clear "fingerprint" of CO2 on any observable climatic quantity is yet to be seen. If the overall agreement isn't "much worse" from the viewpoint of the whole analysis, the case seems settled. The local or regional land surface temperatures near the wind farms have significantly increased between 2003 and 2010 and the attribution seems clear.

Now, if you read the "questions and answers" by the authors as well as various other texts, you will see some hints how this influence could work as well as some details and disclaimers. Let me mention four points.
Many details and disclaimers may be added but one of the claims that certainly does not follow from the article is the claim that wind farms don't cause global warming!

It's totally plausible and suggested by the paper that the effect of the wind farms is substantial and may even dominate the observed growth of the surface temperatures in recent decades. Note that the surface warming observed by the weather stations was faster than the warming of the mid troposphere (as observed by satellites or weather balloons) even though the greenhouse-effect-led climate models predicted exactly the opposite. It has always looked like as if the actual main cause of the warming is tied to the Earth's surface. And indeed, the wind turbines are tied to the surface as well and they're candidates that may explain where a large or small part of the warming in recent decades came from.

The particular one-squared-degree area of Texas on the map above includes approximately one-third of the area that was substantially heated by the wind turbines and two-thirds that weren't. Is there a potential for the warming to be substantial? You bet.

Imagine that we use the wind turbines to get all of our electricity. These days, wind turbines of the world only produce 0.2 terawatts out of 16 terawatts of electricity that the mankind consumes in average. That's just 1.25 percent. If you imagine that you install the remaining 98.75% of the turbines, you do so at the same places where they're today (be careful, the potential for energy gain is reduced if the concentration of the pinwheels is too high), and you assume that the resulting warming is linear, then 0.72 °C per decade may become 80 times higher, i.e. up to 58 °C of warming per decade or 580 °C per century in the regions surrounding the growing wind farms. Such increased temperatures could be a bit unpleasant for those TRF readers who don't like hot weather. This linear estimate is probably overstated but it's surely a proof of the concept that the climatic effects of the wind turbines are substantial and probably vastly exceed the impact of the CO2 whose burning was avoided by these wind turbines!

One should perform a more accurate calculation – taking the actual areas that are affected into account etc. – but it's very plausible that the effect of the "un-emitted carbon dioxide" is negligible relatively to the direct effect of the wind turbines on the regional climate. After years of having worshiped wind turbines and other uneconomic energy sources, I guess that the champions of the climate panic may feel uncomfortable because they face a potential proof that what they have been defending is insane even according to their previously declared criteria. But the fact that this finding is inconvenient doesn't mean that it's wrong. The evidence suggests it is right.

There are many similar effects, both natural and man-made, that have an effect on the climate that is at least as large as tenths of a degree per century. This was one of the most unifying messages that the climate skeptics of (almost) all colors have been emphasizing for decades. Just if you look at potential causes that are similar to wind farms, you may realize that the very fact that we are building houses and skyscrapers may have affected the climate as well. The greenhouse effect caused by the increased concentrations of the second most important greenhouse gas, the carbon dioxide, is just one effect among hundreds and in the grand scheme of things, its impact on the climate may pretty much be ignored, at least during our lifetimes. And even the overall effect of climate change is negligible relatively to other changes we are facing. This simple and modest conclusion of the proper scientific research is inconvenient for those who have had various grand plans justified by the conglomerate of lies about the "harmful CO2" but it doesn't reduce its validity.

An intellectual camprdlík named Justin Gillis (whose greatest achievement is that he has connected the dots) was allowed to write a hit piece against Richard Lindzen, arguably the most prominent atmospheric physicist on this planet. Roger Pielke Jr has collected just the phrases that try to sling mud on Lindzen. The laundry list is kind of unbelievable for one, just one article:
Unfortunately, those 17 vicious lies that would make communist propagandists ashamed for their relative peacefulness are not matched by a single glimpse of a scientific argument that something is wrong about Richard's description of the climate.
Luboš Motl v 8:58 AM
Share