Very interesting update, June 2012: Google Maps have mapped almost all of the Czech Republic via StreetView. Click at the link and among other pictures, you will find hugely distorted colors of the tree tops exactly at the place where I always experience the electric shocks.


Yesterday, I experienced something that I've gone through many times in my life and probably regularly (at several "best points"): when I ride my mountain bike which has a hole in the seat and a metal right underneath (which may probably be in contact with my slightly wet shorts), I am terrified by an electric shock – some tingling comparable to a dozen of stinging ants attacking a square decimeter of my skin – for a second when I am crossing some high voltage power lines – maybe 400 kV or so – perpendicularly.

The power lines between villages called Druztová and Dolany in Greater Pilsen (approximately in the middle of this map) represent the most frequent place at which I have encountered the sensation. As far as I remember, I've never felt the effect with my "ordinary" tracking bike which has no hole in the seat (so the metal beneath the hole is isolated away). 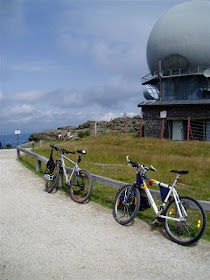 Take the right mountain bike (a picture from Gross Arber, the highest peak of the Bohemian forest on the Bavarian side, where I rode some time ago). The detailed situation is described on the Physics Stack Exchange.

The sensation is always so strong and so unpleasant that I have never continued to do further experiments; thinking about the parts of the body that could have been burned had a higher priority. In my family environment (and among some real-life friends), I was told it was impossible for the normal people and the only explanation was that I was a homeopathic seer, diviner, and psychic – a witch of a sort. ;-)


I am not able to convince anyone around me about this particular scientific insight but there aren't any real witches of psychics in the same sense in which there is no genuine Santa Claus: there are just fraudsters, nutcases, and gullible and brainwashed uneducated consumers of the paranormal superstitions.

In particular, I am no psychic at all: together with my bike, we are just two objects that obey the laws of electrodynamics, much like everything else. The current is so intense that I am sure that every person with the same bike, the same humidity of the shorts or whatever is needed driving in the same direction has to experience the same thing. On the Physics Stack Exchange where I asked for some qualitative description of the relevant electromagnetic effects and some estimate of the currents and/or voltages, Anna V game me the most constructive answers so far, encouraging me to approximate the situation by a shorted antenna. I still hadn't time to estimate the electric fields and currents that may have been running through my body. Can you try to do it for me?

The frequency of the AC current is hopefully 50 Hz. The height of the wire above the road may be lower than the height of the mast because the wire is hanging – in an U-shaped way – maybe the wire is 15 meters above the ground. Assume that the voltage is 400 kV although it could be less or more; I don't remember the exact power lines and even if I did, it could be nontrivial (although in principle possible) to determine the voltage out of the shape.

Anna V has linked to this art installation with hundreds of large fluorescent light bulbs stealing the electricity from the electromagnetic field:

HTML and pictures supplementing the video... Some additional cool pictures.

So if someone says that there is less than a milliampere running through such gadgets (or my body), then apologies, I just don't buy it's a correct calculation. Another, more physics-oriented video about catching the electricity under the power lines (with spark gaps) is here:

At the Physics Stack Exchange, I've linked to a few cyclists' forums where people have reported a similar effect although the body parts could have been different (probably depending on which parts of the bike are isolated and/or metallic).

What I will say now may be very stupid but doesn't the alternating current at 400 kV about 15 meters above the soil mean that there must be the average electric field about 400/15 = 27 kilovolts per meter changing 50 times a second? That would be a pretty high voltage if you shorted it in some way, right? Or is the field compensated by some charges on the top of the soil? And if that's true, won't I feel the effect of these changing charges, anyway?

Be sure that I've solved many similar problems correctly but they were already "more carefully stripped" of the real world mess so that I knew what I was calculating. Here, I am not sure what I should start with.

My subjective reading of the effect suggests that the effect is so strong that with the right geometry and length of a metal, the power lines could easily kill someone. I am looking forward to the voices of folks who are more experienced and more self-confident when it comes to electrodynamics in the real world.

By the way, another user of the Physics Stack Exchange mentioned a paper that could suggest that my having enough body hair could be necessary for the effect, too. ;-) Too many questions here.

CIP has proposed Faraday's electromagnetic induction. The changing B field goes from the left to the right, through the "loops" in the bike's skeleton, so it has the right orientation to induce voltage around the metals and the body.

However, Art Brown at the Physics Stock Exchange wrote something that looks very plausible to me. At frequencies as low as 50 Hz, the wavelength is just huge and all effects of electromagnetic radiation must be negligible. So it must be possible to use the static electric fields to analyze the problem. The naive field is 10 kV/meter or so but it's reduced to 1 kV/meter by the higher distance from the cables and by the imperfect cancellation between the wires that have different phases. Art Brown still ends up with some 700 volt potential differences between the bike and skeletons which he considers enough for a small shock. It's probably right but I am not getting a trivial issue: why is it dangerous to touch the (lower voltage) 120 V or 230 V power outlets then?

Gene wrote some thoughtful explanations. A low humidity is probably helpful for the effect to go because it's about "sparks" at the end.
Luboš Motl v 8:48 PM
Share