Cosmological update: Bovy and Tremaine of IAS looked at a recent Chilean claim – wildly hyped in the mainstream media (but only mentioned in one sentence on TRF, in an article on a different topic) – that there was no dark matter around the Solar System. When they corrected some profiles for the velocities, they found out that the dark matter density is nonzero and compatible with the usual estimates. Via Resonaances


Phil Gibbs has written a cute and user-friendly java applet (download Java 7v4 instead of your dated Java 6v32 if you don't have the new one yet) that allows you to create thousands of charts relevant for the Higgs boson discovery:


A screenshot of the applet is below.

Once the page above shows up, try to change the "Plot Type" to Exclusion, Signal, Pvalue, Sigma and see how the bump near 125 GeV is immediately affected. If you want to spend more time, you may try to play with the decay channels and individual detectors that are included and other things. 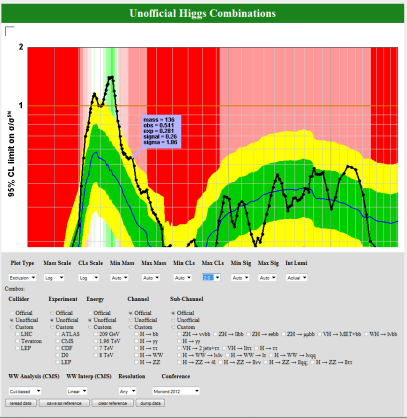 When you add all the channels at a single detector (CMS or ATLAS), the data accumulated so far are "more likely than not" to be enough for 5 sigma of local significance. For a global significance, one detector isn't quite enough but a combination of both ATLAS and CMS is surely enough by now to obtain 5-sigma global significance for the discovery of the 125 GeV Higgs boson, too.

On July 7th, there will be a new announcement on the progress with the Higgs boson. We will have to see whether they will remain separated or not. My guess is that at this time, they will already have the combination from CMS and ATLAS and they will announce a shared discovery of the 125 GeV Higgs boson. (John Ramsden will strictly owe me $500 at that moment, if true.) It's also plausible that they will actually collect much more than 2.5/fb in 2012 by then and evaluate the results quickly enough. If they collect much more than 5/fb for 2012 by the July conference, they could make the discovery announcement separately (or at least the "luckier ones").

Still, I find the inclusive "combo" solution more likely from a sociological viewpoint because it's kind of politically correct. Such an inclusive solution wouldn't occur for the first time. In the mid 1990s, the top quark was discovered once the data from CDF and D0 at the Tevatron were combined. When it comes to ATLAS and CMS, I don't think that one of them deserves to be credited with the Higgs discovery more than the other.
Luboš Motl v 10:26 PM
Share