HSCP at CMS: many 2-sigma excesses

Hints of long-lived superpartners and hadrinos

In January, I mentioned a curiously high number of three events suggesting that there could be a new long-lived charged particle whose mass is approximately \(700\,\GeV\). Shadron, one of the animals that the LHC tries to recreate

The CMS folks just released a new preprint on this topic:


The paper has built on 5 inverse femtobarns of the data. Has it found a smoking gun?


The answer is No. On the other hand, the number of near-2-sigma excesses seems somewhat higher than expected. In particular, look at Figure 5. 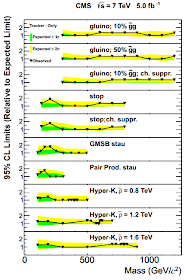 which only used the tracker (the inner part of the detector; the corresponding events were required to leave "tracks" with a high transverse energy as well as a high loss of their energy per unit distance in the tracker) as well as the other part of the chart which has used both the tracker and an anomalous time of flight (TOF): 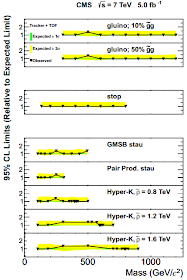 These pictures show the ratio of the observed upper bound on the cross section to the expectations, including the 1-sigma and 2-sigma bands. You see that the first picture contains an intriguing excess for gluinos between \(600\) and \(900\,\GeV\), not to speak about the excess near \(1200\,\GeV\); for the second picture, the gluino excess is reduced to the value of \(500\,\GeV\). All of these are attractive values of the mass.

Both stops and stau show intriguing excesses around \(200\,\GeV\) in the first picture; for staus, this gets moved to \(300\,\GeV\) in the other picture in which stops show no excess. Note that the hyper-K and similar unusual particles are hadrinos, namely mesons containing squarks. (Let me reserve the word "shadron" for baryons with squarks.)

These excesses are nothing to be completely thrilled about – so far – but they're slightly interesting. Note that according to the supersymmetric models that people spent much time with, most of these superpartners shouldn't really be long-lived so even if the excess were much stronger, it wouldn't support some conventional supersymmetric models in an uncritical way. On the other hand, it's plausible that e.g. gluinos want to incorporate themselves into shadrons and hadrinos, e.g. the gluino-gluon state, the so-called R-gluonball. The fraction of gluinos that do so is unknown although it is, in principle, just a matter of a messy QCD-like calculation. Can dark matter be composed of neutral piinos or kainos? Experts surely have an answer to this naive question of mine.

Still, one may find the findings somewhat intriguing...


I recommend you a remarkably clear 80-minute Gordy Kane's talk in Stony Brook, introduced by Mike Douglas. The assumptions and relationships of their scenario with all the major issues in model building are very clearly stated. It's remarkable in how modest, low-key environment all these things – potentially the most important discovery in pure science in a century that may be underway – are presented.

For example, he clarifies that they concluded that the R-parity violation is nonzero but tiny enough to be unobservable by the LHC. The little hierarchy problem is mostly solved by a large enough trilinear coupling. Given the recent Fermi signal, the winos should be around \(144\,\GeV\) and the charged ones should be just \(0.16\,\GeV\) heavier than the neutral LSP ones.

A gluino is boldly expected to be discovered by the LHC in this year's data, mostly decaying to \(tttt\) or \(btbt\) or \(bbbb\). The decays go via virtual stop or sbottom quarks which could have been confused for the real ones – so if the stop squark rumors are supported by something, it could actually be a signal supporting the picture by Kane, Acharya, and friends. Note that at \(8\,\TeV\), the cross section for a \(1\,\TeV\) gluino is twice higher than at \(7\,\GeV\) so the planned 15 inverse femtobarns in 2012 is equivalent to 6 times the power of the 5 inverse femtobarns in 2011.