Lots of media including Fox News have written about the Harappan culture, also known as the Indus Valley Civilization:

The news describe the opinions published in a new paper, "Fluvial landscapes of the Harappan civilization", in PNAS. 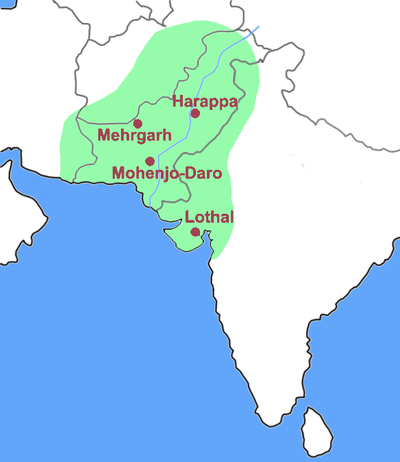 The paper argues that the decline of the majestic civilization that once included 10% of the world population – between 1900 BC and 1000 BC – was caused by... climate change, of course.


During the millennium I mentioned, the large cities were fading away and people were apparently moving to the countryside and/or East Asia. I am not even sure whether I believe this basic proposition.

But the paper goes well beyond this level of speculation. The declared cause of the societal changes was climate change. Why? Because a comparison of the current sediments and ancient sediments combined with the modern satellite observations indicates that it was often warm, 43 degrees Celsius (110 degrees Fahrenheit). That's supposed to be it: the explanation. However, in contrast with the summaries in all the media, the paper actually talks about the decrease of the intensity and frequency of small floods which had been helpful for irrigation.

Whatever source you pick, these claims raise so many questions and so many surprised looks.

First, we may discuss whether they were able to determine the weather more than 3,000 years ago. But imagine it's possible and their reconstruction is fine. But does the rest follow? Would the ancient people be annoyed by the hot weather at all?

More importantly, why would people react to the warm weather by moving away from the cities? And if they reacted in this way, why wouldn't they try to move to the North rather than to the East?

As you expect, I don't buy either. The modern climate change isn't unprecedented and the climate change hasn't been a major issue deciding about the fate of civilizations in the recent 6,000 years. The climate was changing only very, very moderately, by a degree or two or three, and such changes have a totally negligible impact on the societies and economies. More than 6,000 years ago, the warming trend was more intense as the Earth was coming out of the last ice age and there were still continental ice sheets waiting to be melted.

Just look at the world today. What is threatening the civilization? It's things like fiscally irresponsible governments in banana republics such as Greece. People from economically weaker countries easily emigrate to other countries where the temperatures are often different by dozens of degrees – or the same. The temperature is not the real issue. The survival of Greece as a state after June 2012 won't depend on whether the average monthly temperature in Athens will be 25 °C or 35 °C. It's almost totally irrelevant. It's always almost irrelevant.

Quite generally, it's also nonsense if someone claims that the temperatures in India or the Middle East are too high to allow a thriving civilization. These regions are exactly the regions where the most glorious ancient civilizations were born! Just think about Egypt, Mesopotamia, India, Persia, and others. They were pretty warm places.

Some very rich countries of the modern world are located in the colder zones. But the survival of the people over there required some increased sophistication of the societies and their technologies. Apologies if those things sound racist to anyone – I am from the very middle of Europe so my comments may be viewed as impartial – but the nations in the North became more resilient and disciplined simply because it was needed for the survival. In other words, those who have survived in Scandinavia and elsewhere are inevitably descendants of those who could bear the unpleasant i.e. cold weather.

But it was still possible for them to survive even though the temperatures in Norway differ from those in New Delhi by 20 °C. A warming or cooling by 2 °C or 3 °C, especially if it is distributed to periods as long as 900 years, just doesn't make a detectable difference.

What is more important is the humidity and amount of precipitation but it's unlikely that they may really reconstruct those things for the year such as 1500 BC. More obviously, it's nonsense that monsoons could have been turned off. Monsoons are seasonal winds that result from unequally fast warming (or cooling) of the land and the sea. You can't stop these effects just like you can't stop the Gulf Stream (because you would need to stop Earth's rotation); you simply can't change the laws of physics.

The paper in PNAS is a seemingly innocent piece of abstract nonsense produced in an ivory tower that doesn't hurt anyone. Except that it does. Pseudoscientific gibberish of this type is being used by some people to make truly harmful proposed policies look serious and justifiable. As long as papers of this type are flourishing in the literature and their authors are viewed as anything else than what they are, namely crackpots, we can't claim that we have defeated the climate hysteria.

The painful situation is amplified by the media. News outlets including center-right ones such as Fox News are employing writers that deliberately cherry-pick peer-reviewed articles from this narrow subdiscipline – a pseudoscientific subdiscipline – because they can't really write about almost anything else. So the insane excess of the climate-change-causes-everything articles in the literature, one funded by those $1.8 billion in bribes, is made worse by an additional layer of politicization and distortion of overall message of the scientific literature, distortion that may be blamed upon the climate hysterical inkspillers and those who harbor them.
Luboš Motl v 5:45 PM
Share