Czech President Václav Klaus is no military hawk. He had mixed feelings about NATO's interventions in Yugoslavia, Iraq, and probably others if there have been any and many of his attitudes may put him relatively close to folks like Ron Paul.

But before the ongoing NATO meeting began in Chicago, he said something, well, pro-interventionist. 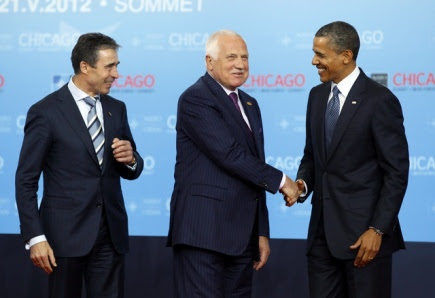 Klaus surrounded by his American and Danish fans. After they shake his hand, they usually don't wash their hands for a week or so.


Before the event began, he adjusted the discourse by his interview for the Czech Press Agency. Note that Cameron plans December 2014 to be the month after which there won't be any military operations by the British in Afghanistan. However, Klaus said:


It would be phoney to fool ourselves into thinking that the Afghan government and the Afghan law enforcement forces are capable of taking the resposibility for Afghanistan from the allies. This is not possible.


Klaus expects the mission to continue after December 2014, too. France plans to leave Afghanistan as soon as in 2012. However, Merkel declared she wouldn't change any plans. Klaus warned that military is the easiest target of attempts to save the money, especially in economic times that aren't easy, and this is a problem for NATO.

Today, Obama said that confident Afghans may take security lead which is, as you can see, exactly the opposite of what Klaus had said previously. Today, however, Klaus said that Czechia is ready to adequately contribute to the Afghan military which suggests that some other folks may have influenced him over there. I personally remain skeptical about the idea that letting Afghans to retake the security lead after a decade of struggles and casualties is a good idea.

After the NATO summit, Klaus will stay in Chicago for a few days because he is a keynote speaker at the Seventh Heartland Climate Conference, ICCC-7.

Incidentally, Peter Gleick may have counterfeited a document claiming that he has been cleared of having counterfeited the documents pretending to be Heartland Institute's documents – and The Guardian may have bought into this new forgery before they realized the mistake and deleted the article endorsing Gleick's new forgery from the Grauniad website. If it is a correct explanation of the deletion, it is amusing, indeed.

Let me also mention that an internal European Commission memo suggests that all green subsidies in the whole EU could be abolished. That would be a good thing – and quite a change.

By the way, this week carries a highly elevated risk of an assault against Iran. Iran seems as defiant as it was in the past, there will be some negotiations about their nuclear exit in a few weeks. They will not agree and America has declared it's technically ready to strike at this moment.

The picture below is coming from the closest webcam to my home that I am aware of; I actually see the very same brown building from my windows but it's from the other side:

Some newspapers just claimed that this nest produces one new falcon every day! Oops, correction: they don't actually mean a new baby every day. They say that there should be a baby and the birth is imminent so you should watch every day...
Luboš Motl v 5:29 PM
Share