Klaus for Heartland on AGW: Eastern Europe is a bit corrupt, Germany is confused

Czech president Václav Klaus was the keynote speaker during the Monday dinner at the Seventh Heartland Climate Conference, ICCC-7, in Chicago. 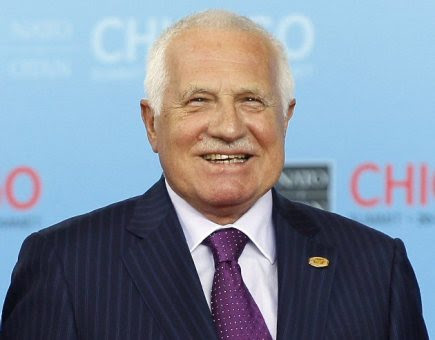 One could have said that all things have been said but one could have been wrong, too. He said some revealing things and addressed some novel questions about politics of AGW.


for his full contribution. He mentioned that NATO doesn't care about AGW; ordinary people in Europe think that the hysteria is over; the AGW advocates have changed their tactics and try to suppress the debate as much as they can because the more it is being debated, the more people see how suspicious the doctrine is. So the alarmism has subsided, Klaus thinks, but given the advantage of facts, this new silence isn't in the skeptics' interest.

The rest of the blog entry will discuss some Czech media responses to his speech.

As the Czech Press Agency reports, Prof Klaus said that the post-socialist countries of Europe are "slightly bribed by the European Union" when it comes to their attitudes on the climate change panic. Up to occasional protests and disagreements from Czechia and Poland, these countries don't feel free in their struggle against the dominance of the global warming doctrine, he said in Chicago.

At the same moment, Klaus thinks that Germany is confused due to its decision to retire its nuclear power plants.

Klaus discussed the mild corruption of Eastern Europe after he was asked by other participants whether he sees a visible movement against the climate change panic that would be emerging in Eastern Europe. According to Klaus, we can't speak of a significant movement due to the reasons mentioned above. Also, Klaus predicted that Germany wouldn't change its decision to retire nuclear power plants even though the decision sparked by the post-Fukushima hysteria has scared both industrialists as well as ordinary citizens.


Germany believes in wind energy. They have built thousands and thousands of wind turbines which is, among other things, a problem for our grid. These problems acquire nearly catastrophic proportions whenever the weather is very windy.


Some of these words were new for the mostly American participants of the Heartland conference. Klaus also mentioned that we plan to extend our nuclear power plants, despite the anxiety that the plan causes in neighboring countries of Austria and Germany as well as the EU. However, the Czech government doesn't intend to scrap these plans, anyway. When the participants heard about this attitude, they applauded.

In his speech, Klaus repeated his warnings against the champions of the man-made climate change worries. He believes that it is not the climate that is at stake; instead, what they care about is how to influence the society to match their desires. In this respect, Klaus said, the climate alarmists are exactly isomorphic to the communists.


We must accept the fact that they were able to promote the environmentalist religion to the status of the official religion of the West. It is a religion that demands a radical transformation of the whole Western society.

Klaus has attended several Heartland conferences in the past. This year, he came there from the NATO summit in Chicago where he led the Czech delegation.

The Heartland Institute was founded in 1984. It focuses on the support of free-market solutions to economic and social problems. The institute belongs among America's loudest critics of the global warming doctrine. The Czech Press Agency opined that an "overwhelming majority" of the scientific community supports the AGW doctrine, anyway. It has also enumerated some sponsors of the institute, including Microsoft, Pfizer, Eli Lilly, Koch brothers, and Exxon Mobil – the last one no longer supports the free-market think tank. The journalists also mentioned that Heartland has contributed to a study co-sponsored by Philip Morris in the 1990s that questioned the health impacts of second-hand smoking. So be sure that the usual pro-warmist delusions and propaganda make it to the official Czech mainstream media, too.

A page with conference videos is here...

On Thursday, Bill Clinton will arrive to the Czech Republic for the sixth time. Along with Klaus and others, he will speak about energy policies in the Spanish Hall of the Prague Castle. I have some doubts whether Clinton and Klaus will be saying the same things. ;-)
Luboš Motl v 8:58 AM
Share