Oil has lost 4.5 percent today, Dow Jones is losing 1.3 percent at this point. You may be looking for a culprit. 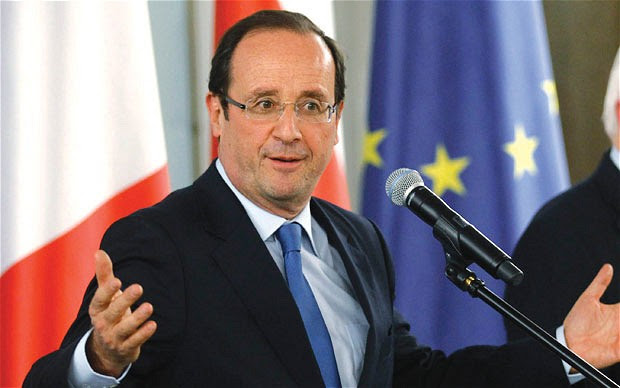 What is his name? In May 2012, the main threat for the prosperity of the world isn't an asteroid or a global warming but a man who is as dangerous as 500 global warmings, 1,800 climate changes and 5,600 climate disruptions.

In the main article for the day, CNN Money has described this threat in a detailed article with a capitalized headline,

And it's a scary reading, indeed. What's going on? Except for the elections on Sunday in which Hollande is actually predicted to win at this moment?


When Nicolas Paul Stéphane Sarközy de Nagy-Bocsa competed against Segolene Royal, a socialist candidate, in May 2007, I had to attend a Harvard party – one of the last ones of this kind – with many female professorial participants (mostly from humanities). They were terrified that Sarkozy could win. He's conservative, they were screaming! And he may end the tension between America and France (do you still remember the irreversible clashes because of the Iraq war? It's forgotten, isn't it?). It's terrible, blah blah blah.

At that moment, I didn't know that it would take less than a year and I would consider Sarkozy another left-winger. But the individual who has a chance to overtake France in 2012 is much scarier. I urge the voters of Marine Le Pen to vote for Nicolas Sarkozy even though he is very far from being perfect because the alternative could be game-changing.

At the end of 2008, Sarkozy didn't want to give up his EU Presidency. This gummi scene looks purely funny and full of nostalgia to me today even though it is based on some genuine opinions of Sarkozy about my homeland. See also Sarkozy vs Klaus, Czech president. The real Klaus would surely act much less submissively during the dinner. ;-)

Of course, we have tons of similar Francoises Hollandes here in Czechia but none of them has a good chance to control a prosperous country of 65 million citizens and – indirectly – much of the European Union and the world. The latest debate between Sarkozy and Hollande was truly hostile but what Hollande is planning is much scarier.

CNN Money mentions the following, among other things:
The real threat is that he's not gonna be satisfied with a new socialist revolution in France and with screwing the financial sector and other pillars of modern capitalism in his homeland, especially because the pernicious nature of his policies would become obvious way too early. He will have a lot of power to spread these sick concepts to the rest of Europe and perhaps to the rest of the globe.

Hollande's Czech ex-counterpart, boss of social democrats, has already been expelled from the social democratic party. He founded a new one, the National Socialist Workers' Party (NSDAP), no kidding.

CNN Money talks about mass bankruptcies of most Western countries and so on. I want to continue to imagine that these scenarios belong to the science-fiction novels but I am actually not sure whether it is a legitimate assumption.