Jason has informed me about a very disturbing, new story about the disappearing freedom of speech in America; the story has made it to the Drudge Report. This cute madam became another victim of the organized reverse racism in the U.S. She was fired (see the poor excuse) for having done exactly what she had been hired to do, namely to provide a conservative viewpoint on educational and religious topics. 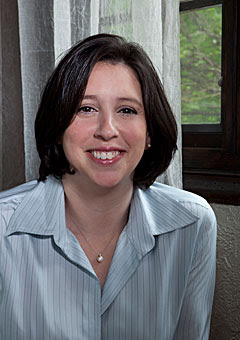 Naomi Schaefer Riley, a former Wall Street Journal editor, was fired from the Chronicle of Higher Education after she wrote this brief yet convincing essay about the need to eliminate the departments of black studies from the American universities:


The Most Persuasive Case for Eliminating Black Studies? Just Read the Dissertations.

Loud far left activists have vitriolically reacted in the comment section (even though they have arguably been a loud minority) and after a few days and 1,000+ comments, she was fired. The story was described by Reason, Wall Street Journal, and the Weekly Standard, among other sensible sources. The best summary of the virtual story was written by Riley herself for the Wall Street Journal; thanks, Jason.

Do I have some experience of a similar type?


Before I answer this question, let me say that Riley has mentioned three insane examples of theses that allowed some people to earn degrees.

One of the "scholars" discovered that the feelings of black midwives were underrepresented in the historical "natural birth literature". The other thesis argued that single-family houses and the recent mortgage crisis were parts of a mysterious racist conspiracy against the blacks. The third and "most amazing" thesis argued that particular famous black conservatives led the assault on the "civil rights legacy that benefited them" by disagreeing with the need for affirmative action and similar things.

Cool. Just write a completely crazy and silly racist rant linking some random topics, incorporate the attacks on some people who may be "freely attacked", and if you have the right skin color, you will get a degree. The examples sound incredible but my experience does suggest that these theses are far from exceptions.

Of course, those stories are not new for me. When Larry Summers became the ultimate witch to be hunted by the Harvard's feminists, we quickly learned about other stories about Larry and the political correctness, especially about his conflicts with Cornel West. This far-left black activist was one of the most popular instructors at Harvard because he was teaching hip-hop or something like that and he gave everyone an A. If you're a superficial student and maybe even if you aren't, you must just love him, mustn't you?

When he contributed to a rap album, Larry Summers very carefully and peacefully suggested that maybe Prof West should have been dedicating more time to more scholarly activities than rap albums. Cornel West got so angry that he has launched a nuclear war against Larry and escaped to Princeton: in the era of reverse racism, this kind of a well-known parasitic ideological pseudointellectual is always welcome at every university. It's my understanding that West is continuing his war against Harvard even today. I just find it amazing. This guy shouldn't be at a university at all, he's a full professor at one of the world's most famous universities, and he's still not satisfied with the way how he's being treated.

That doesn't mean that Cornel West was the only "black studies professor" who shouldn't have been at Harvard. There is a whole department of similar, less well-known folks of the same kind (aside from a similar department of professional whining women, not to speak about numerous less flagrant examples). Your humble correspondent has had personal troubles with a Lorand Matory, the author of several petitions directed against Larry's presidency. These stunning jerks had their fingers everywhere. So once he didn't like something I wrote about his anti-Summers declarations on this blog, he contacted the whole hierarchy and the chairman of the physics department ultimately forced me – by a "friendly talk" – to write an apology to the Matory jerk although I didn't do anything wrong at all.

You don't really believe that I may avoid to viscerally hate similar scum, do you?

The chairman at that time, John Huth, an experimental particle physicist, has always been a career-oriented opportunist. One could say that I have known this kind of people very well from communism etc. – people who superficially nurture several faces but who always ultimately support the political ideologies that seem "stronger" and that have a chance to help them financially etc. I quickly learned that Huth had no character to speak of – and I had already known what side he would actually support – but I also realized very well that many things in my life depended on such individuals. For example, if I were fired, I could immediately find myself in a conflict with the conditions of my H1 visas etc.

Needless to say, foreign people who work in the U.S. Academia have even less freedom than their American counterparts. It could have been difficult to quickly leave the U.S. at a random moment so I was careful not to be fired and simply left at a controllable and planned moment, namely when my H1 visas expired on July 1st, 2007.

Now, Naomi Riley has faced a whole commenters' army of similar Matorys who don't have any respect for the basic Western civilization's values such as the freedom of speech. And the folks in the Chronicle acted like some counterparts of Huth. They found it more convenient for themselves to fight together with the nasty anti-freedom mob and they fired Riley.

You may try to tell me anything about your opinion that this is how free markets operate but it's not. This is how fascism operates. She's been writing very attractive and commercially successful texts – in fact, the last one was another example – and the reasons why she was fired weren't commercial at all. They were purely political. She became inconvenient for an organized mob of dishonest reverse racist criminals. Their market value is zero and they have nothing whatsoever to do with the profitability of any journal but they're very loud and aggressive and many people are afraid of them. Much like other dismissals, this firing has nothing to do with doing business. It's all about some aggressive folks' efforts to prevent other people from doing business – even though the First Amendment unambiguously says that they have absolutely no right to harm other people's business (e.g. Naomi Riley's business) with this justification.

Once again, this is not free markets in action; this is a story about a distasteful totalitarian mob intimidating the whole society. I am sure that every sensible person agrees with Riley that those theses are insane – pretty much by definition of a sensible person – and they make a very convincing case to liquidate the departments of professional blacks at the Western universities. Most of the comments are pro-Naomi now, of course, after the story was mentioned by Drudge. But a smaller army of screaming losers and liars is still effectively preventing many people from revealing their opinion, a situation we have unfortunately known very well from the history of the 20th century Europe.

In the video above, she explains some of the points in her latest book, the book linked above. Professors like to avoid comprehensive introductory classes and prefer would-be "original research" publications about excessively specialized and often obscure topics. I couldn't agree more: many people are ultimately incompetent to teach the introductory courses because they don't really master all of their broader field. So they're hiding under would-be "cutting-edge articles" whose wrongness or unimportance (or the low efforts they actually require) can't be seen by too many people...

Most of the one-hour video critically analyzes the concept of "tenure" and about conservatives in the Academia. Among many good points, she also says some silly hardcore populist things about string theory. ;-)

She also says how she was happy to have a rare conservative instructor such as Harvey Mansfield. However, he would never discuss politics at the academic soil. When confronted by feminists, he would start to talk about Plato etc. Is that manliness combined with decency and impartiality or just fear? :-)
Luboš Motl v 11:10 AM
Share