In the previous posting, I linked to Andrew Strominger's recent talk at Berkeley. So it's fair to link to a talk by his colleague Cumrun Vafa of Harvard. ;-) One may say that it's somewhat ironic that the focus of Cumrun's recent research was much more phenomenological, experiment-oriented than Andy's work.

He gave many recent, more updated talks about the similar topic, F-theory phenomenology, but the videos are somewhat hard to be found at public servers so I decided to recommend you his 2009 colloquium at the very same place as Andy's talk, namely at Berkeley. Be ready for the same room, the same host, and the same video format. 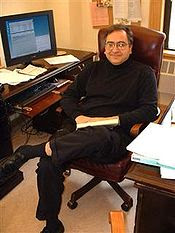 He starts by reviewing the Standard Model i.e. the model of "standard particles", as they call them in the Persian American English. ;-) You learn about the generations of fermions, the Higgs boson, the grand unification, supersymmetry, and other things. But he gets to his F-theory bottom-up model building later – starting from extra dimensions, branes, and what they mean.

It's fun to see that even in 2009, before the LHC began to generate the data, he said things that are still as valid as they were at that time. The Higgs boson was almost certainly waiting to be found and it was found, indeed.

The year 2009 was interesting because it was right after the greatest wave of detailed research on the F-theory bottom-up phenomenology. Many things got settled at that time. Many promising features of this approach to model building had been discovered; many naive beliefs how to complete them to a full TOE had been shown incomplete, too.

My sentiments are split on whether or not the Cumrun-Vafa-led phenomenology is more likely to be true – and validated by the experiments in the future – than e.g. Gordon-Kane-led phenomenology. Those folks don't talk about their competition too much but I may do the comparison for you: The main difference is that Kane et al. assume the four-dimensional supergravity to be valid for much of particle physics.

On the other hand, Vafa et al. are assuming that the non-gravitational particle physics – not necessarily incorporated into four-dimensional supergravity or four dimensions at all – is relevant up to high enough scales. The difference really says that the range of validity of (super)gravity (as an approximation of the full string theory physics) is wider than the range of validity of extra dimensions according to Kane et al.; the comparison is reversed for Vafa et al. (who say that gravity may be turned off as the first one as you go from high-energy physics to the accessible-energy physics).

The difference in these two assumptions or philosophies is substantial but the exciting thing is that the LHC may help to decide pretty soon who is right.

I am a complete agnostic here. In my understanding of a "convincing scientific argument", there doesn't exist an argument in either way (yet) that would imply that there exists a scale at which particle physics is described by a four-dimensional supergravity (without extra dimensions); or there exists a scale for which the extra-dimensional physics starts to matter (although gravity is effectively decoupled already). This is about the comparison of two scales whose values we don't know so both hierarchies are "comparably likely" at this point. Cumrun's guess is "more stringy", in a sense. Gordy's guess is more "effective field theoretical".

After the first question, Cumrun explains that the very philosophy of the F-theory approach is to decouple all gravity questions – including the multiverse or inflation – from particle physics. It's similar to the decoupling of the C.C. in the Kane scenario but this separation is even sharper, one could say.

In the second question, Raphael Bousso asked about definitive tests at the LHC. Cumrun says that there could be SUSY-related signals ruling out or confirming. Generally, he was agnostic about whether the LHC would see new things. Cumrun refers to his paper with his student at that time, Jonathan Heckman, and Gordy Kane plus his student.

After another question, Cumrun has to grade string theory or something like that. "It's just an A. If M-theory is the mother of all theories", it can't be otherwise. Forget about some silly mixed report cards by Andy here. In another answer, Cumrun explains how the gravitino overproduction problem is solved. A minute later, it's being explained that Cumrun was always interested in general predictions of classes of models because the precise identification of the right compactification seems out of reach at this moment.

Mina Aganagic asked about the relationship of the F-theory model building and typical models studied by phenomenologists. Cumrun's models are gauge-mediated models of SUSY but with some extra stringy interactions; and with a higher scale than the phenomenologists usually consider in GMSB.

Another LHC-oriented question: what will he derive from various LHC observations. If SUSY isn't seen, then we can't say anything new. If it is seen in a different way, the gravity decoupling assumption could be the first suspect to be wrong. The third explanation is that string theory is false which Cumrun wouldn't even dare to consider.

Next, he explains that lighter, sub-GeV dark matter in their model is needed to get the right density given their different assumptions. Gravitinos can't explain the direct-search signals – even if they're real – because they're too weakly interacting (super WIMPs).
Luboš Motl v 8:15 AM
Share