The whole world is after the elusive Higgs boson. Accelerators the size of cities are being used to create truly awesome concentrations of energy in a vast number of collisions. We've detected the other particles of the Standard Model. Muons, quarks, neutrinos, the whole gambit. But not the Higgs. How is it avoiding detection?

Turns out, he doesn't want to be found! In the iPhone/flash game Agent Higgs you take the side of Higgs, keeping him hidden from view. The protagonist: a hapless Higgs boson wearing funny glasses. The setting: a particle detector. You can learn more about my game here:

and we’ll get to the details of it in a moment. As you can imagine, it has been a fun experiment for me (Andy Hall of TestTubeGames), trying to pull together a captivating game about Particle Physics. But first: WHY make a game about the Standard Model?


A bit of background about me: I’m a big fan of physics. I’ve been in both academic side and the teaching side (as an educator at a science museum). My favorite topics, though, are things like quantum mechanics and relativity, which presents a bit of a problem when it comes to science communication. We simply can’t interact with these realms in a hands-on way. And abstraction can be a challenge for newcomers. 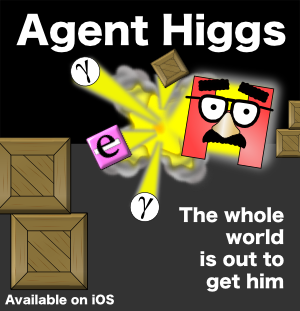 This is what brought me to technology. Through simulations, we CAN interact with extreme realms of physics. We can move individual muons around, or travel near the speed of light. These interactive experiences, to my view, are incredibly helpful to developing understanding. That’s why I started up TestTubeGames in 2011, to make scientifically interesting games.

I decided to make a game about the Standard Model because I think there’s a story there to tell. Frankly, if scientists enjoy thinking about a topic, something exciting is at its core. In Particle Physics, I personally enjoy the patterns. I find it remarkable that there is a small set of fundamental particles in the world, and their properties are related in predictable ways. There are a bunch of conservation laws, and curious interactions and behaviors (like neutrino oscillation or particle decay). Particle Physics is almost a game already.

I had this all firmly in mind when I designed the game. I didn’t want to make a game tangentially related to physics, but wanted rather to focus on my core interests in the topic. Thus, the pieces are the particles of the Standard Model (all the leptons, and eventually the quarks, too). As you move them around, you have to deal with the fundamental forces. Two electrons repel, say. A positron and electron will attract - and annihilate in a burst of energy. Particles can sometimes decay, meaning a muon could turn into a W boson and neutrino. Even for people without much experience with the particles of the Standard Model, my hope is they can, by playing around, get an intuitive sense of their relationships and have fun doing it.

That last point, ‘having fun,’ is extremely important. I made a game, rather than a simulation, and I think this is valuable for many reasons. My previous game, Velocity Raptor, actually started off as a 2D Special Relativity simulator. I spent a lot of time making it highly accurate, and learned a great deal as I did. People would play around with it, and it would be cool. And that was where it stopped. After a couple minutes moving around in this wacky world, people would be done. Ready to move on.

That’s why I turned the simulation into a game. A game not only has a learning curve built right in, but it is also a lot of fun. It keeps players (hopefully) engaged for long periods of time. Long enough, perhaps, to teach them a thing or two. So I added in a central character (Velocity Raptor), an evil villain (Professor Rex), and a whole bunch of relativity-related puzzles to hook people. Thus, when I was pondering the Standard Model, I knew I should focus on making a game rather than a simulation.

Of course, as I said at the beginning, this is an experiment, and there are a lot of things I’m hoping to learn from it. How best to balance the ‘game’ and the ‘science’? What type of content appeals to players most? What is the most effective way to teach content in a game? I don’t know the answers. But, hopefully after releasing the game and getting feedback, I’ll have some data points to work with as I get to work on my next project.

Agent Higgs has been released as an iPhone game, which you can find here. I also just recently released a mini-version of Agent Higgs as a flash game - since plenty of people out there don’t have iPhones. You can find that - along with other games - here. If you get a chance to play around with it, I hope you enjoy.
Luboš Motl v 6:53 PM
Share