Echo comments migrated: The migration process was underway when I was originally writing these paragraphs and was completed in 2-3 hours, around 6:40 pm Pilsner Summer Time (Saturday).

As expected, the reply from DISQUS hadn't been too helpful. The avatars and recognized identities are lost during import (much like "Liked by [Echo users]" lists, of course); maybe an offer to merge your unregistered comments from the past with your DISQUS account will ultimately catch you. Also, the reply structure "should be preserved" except that it isn't. They told me to try another format of XML – DISQUS' most current format – to import which would mean to rebuild a 100-megabyte file with 20 renamed different types of tags, differently formatted dates, differently formatted CDATA, different character sets etc., with an outcome that could fail to work, anyway.

My answer is no, sorry: I won't do that if even a company with only 33 employees that earns millions for this very job doesn't do it right.

I had preemptively prepared a reaction to such an outcome of my conversation with the DISQUS support team. The decision prepared for this unhelpful reply was not to waste additional dozens of hours for some professionals' lousy job and to immediately start the import of my current XML file which has been cured (especially when it comes to the right URLs and missing author names) by tens of hours and a rather long Mathematica code. This plan became a reality within minutes and the import started to proceed a few hours later, after some time in the queue. So the old Echo comments will be preserved but:
The attached 171 pictures from js-kit.com should be preserved and linked by an extra paragraph and URL that I have added. See how a thread with 16 comments recently imported from Echo to DISQUS looks like. This thread has 24 DISQUS comments that combine 14 formerly Blogger.com "slow" comments with 10 Echo comments: they're just mixed with each other into a multiracial society and have the same anonymous feel. ;-)

DISQUS has no image-based smileys and my attempts to insert scripts that replace the smileys by GIFs would probably be futile because DISQUS comments get displayed in a separate iframe (which I consider a rather good policy, by the way). The pirate icon under the blog entries sends you to the Echo archives (with all the good old smileys and like-by's and reply structure) but you can no longer add new Echo comments which is why you may want to get familiar with DISQUS 2012 which is arguably a superior system, anyway. The Echo archives will disappear on October 1st; the pirates will go extinct soon afterwards.

I recommend regular users to look at the capabilities of DISQUS. You may surely have your "D" account that displays a nickname, not a real name, and you may choose your avatar etc. in gear-icons (right upper corner of DISQUS), Edit your profile, go through the menus. The conversations may be ordered from the newest, oldest, or best comments (click at the Discussion in the upper left corner of the DISQUS iframe). Choosing e.g. "oldest" again is a fast way to reload the DISQUS iframe, by the way. Try to go through the buttons to see what DISQUS allows you. Non-troll commenters are being quickly placed on the white list, to avoid the "due to abuse" message (which is a buggy message that stands for "this comment awaits a moderator").


As Google's Doodle reminds us today, Alan Turing would celebrate his 100th birthday on this very day if he hadn't swallowed some cyanide when he was 41. 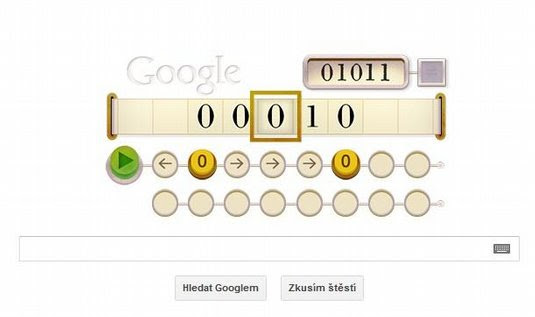 He's not but that's just due to an unlucky accident.

And we must appreciate that the first 24 years of this century of computer science were passive: only when Turing was 24, in 1936, he described his a-machine (automatic machine) or Turing machine, as we call it today. This machine was important as a "proof of concept" to show that deterministic gadgets based on a rather simple philosophy were capable of doing pretty much all mechanical tasks that humans can do with the information and numbers.

What is a Turing machine?

It has an infinite tape with infinitely many squares. Each of them contains a symbol from a finite set that can be rewritten. One symbol/square in this infinite memory is just being read by the "head". This symbol is \(a\). However, you can't live with the tape only. You also need some "processor", right?

A Turing machine has a processor that can be reduced to a finite memory, the state register whose immediate state is denoted \(q\), and... What about the part that actually calculates? This whole part is represented by a table and nothing else. That's enough. The table says\[

\] Depending on the variable data, namely the state \(q\) of the state register and the character \(a\) that the "head" is just reading, the table determines what the new state of \(q,a\) should be – those things are being rewritten in the state register as well as on the tape – and for these values of \(q,a\), the table also says whether the head should stay at the same place, i.e. \(d=0\), or move by one square to the right or to the left, \(d=\pm 1\). That's it. That's everything you need. That was Turing's representation of the Al Gore Rhythm that he was able to invent years before Al Gore, the inventor of the Internet and the savior of the world, was even born.

Well, for finite projects, you don't really need the infinite tape, either. A finite tape would be enough and its memory could be incorporated in the state register, your humble correspondent would simplify the Turing machine. ;-) But with this simplification, the machine would be really dull: everything it could do would be written in the table. The separation of the memory to the tape and the state register in the Turing machine conveys the fact that a computer is supposed to process a huge amount of data with instructions, codes, and processors that are much more limited.

What your CPU or GPU is doing is just one gigantic table. Of course, it is a table with many patterns that contains addition and multiplication tables and many other more complicated tables as its subtables. These tables aren't being remembered in a gigantic amount of memory. Instead, they're being calculated. New computers are calculating – and doing many complicated things with graphics as well – by a synchronized dance of many transistors. Modern computers have many layers of memory (and cache) that interpolate between the tape and the state register, too. But in principle, a large enough table would be enough. It wouldn't be equally practical but it would be mathematically equivalent.

If you haven't heard about the cyanide story, I must tell you. In 1952, he was arrested and accused of a sexual contact with another gay – the same kind of a "crime" that has previously haunted Oscar Wilde as well and that would instantly promote you to the chair of an Ivy League university president nowadays. He was fired and had to undergo an estrogen therapy. Because of the latter, the thin marathon runner got fat and acquired breasts. He was disgusted by these new organs so in 1954, he got inspired by his favorite fairy-tale hero, Ms Snow White. In particular, he took "an especially keen pleasure in the scene where the Wicked Queen immerses her apple in the poisonous brew". He did the very same thing. Just like in the 1937 Snow White movie, he died – but something else was born at the same moment. Of course, I am talking about the logo of Apple:

Now, you just add a few more details by John von Neumann, Bill Gates, Steve Jobs, and a few others – apologies if I have forgotten about your name but the state register of this particular blog entry was limited and I didn't want to write it on the tape – and lots of straightforward work and you get to the current state of the computer science and computer industry. ;-)