Radiative cooling (and warming) isn't a key effect: a piece of the man-made climate change "lore" is shaken

This particular paper which may have isolated a major mistake in the would-be mainstream "lore" of the climate science – and in all the climate models – hasn't gotten a sufficient amount of attention in the climate blogosphere. An article by The Hockey Schtick at the end of April and The Orange Punch yesterday are two exceptions. 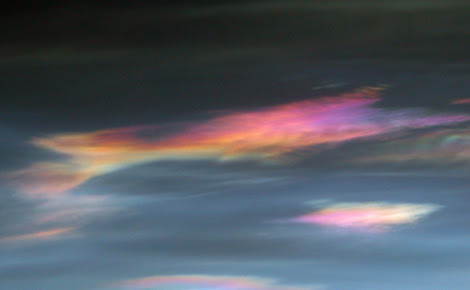 We're talking about a paper in Atmospheric Chemistry and Physics that studied the conditions under which the clouds form in an upper layer of the atmosphere above the Arctic (the stratosphere):


On the linkage between tropospheric and polar stratospheric clouds in the Arctic as observed by space–borne lidar (abstract, PDF full text for free)

If you need to know, a lidar is a radar that is emitting light waves instead of radio waves but it still looks at the reflected ones. For the same reason, a wadar is a garden hose.

The four authors, P. Achtert, M. Karlsson Andersson, F. Khosrawi, and J. Gumbel of Stockholm, actually try to do some proper science i.e. compare the predictions by various a priori possible theories/answers/hypothesis/explanations with the observations (instead of, for example, inventing interpretations of phenomena – arbitrarily contrived interpretations – that are compatible with a predetermined belief: I hope that 97%-98% of the "climate scientists" will appreciate my description of their corrupt work).


What did they find?

They found no correlation!

What does it imply? Let me copy the last sentence of the abstract:


Thus, our findings suggest that Arctic PSC formation is connected to adiabatic cooling, i.e. dynamic effects rather than radiative cooling.


The global warming climate models predict that the troposphere is warming – there's a hot spot in it – and the stratosphere is cooling. Virtually all of these changes in these climate models are due to radiation.

This really means that the radiative flux – which energy in the form of radiation goes up or down and which places it is able to reach – isn't a dominant factor deciding about things such as the changes of the stratospheric temperature, at least if we talk about the cooling that precedes the formation of the stratospheric clouds. That's a big news because the global warming "paradigm" is all about the radiative flux. The greenhouse effect is all about the change of such radiative fluxes and they're believed to be the primary quantities that decide about the temperature at various places.

But Nature doesn't seem to work in this way.

Instead, the Swedish authors argue, the data support the theory that the formation of the polar stratospheric clouds – a sign of a cooling of the stratosphere – boils down to a cooling of another, non-radiative type: adiabatic cooling. Adiabatic cooling is a cooling caused by a decreasing pressure of some body of the air. This body "pushes" the surroundings and does mechanical work on the surroundings. By doing so, it loses some of its internal energy. Each molecule loses some kinetic energy which gets translated to the decrease of the temperature.

Of course, you won't see similar papers discussed in the media. Such papers are actually learning something about what really matters in the atmosphere; but they don't have the desired "societal implications" so the biased journalists just don't write about such things.

No hockey stick in China

Another interesting paper is summarized by this graph: 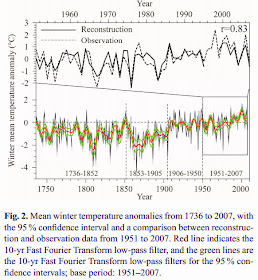 The Hockey Schtick reviews a paper in the Climate of the Past that looked at winter temperatures in China (and AGW predicts that the winters should be particularly sensitive to man-made global warming). You see that nothing unusual takes place in recent decades and the temperature in 2007 is the same as in 1736.
Luboš Motl v 10:04 AM
Share