Bank of America will waste its whole bailout on AGW hysteria 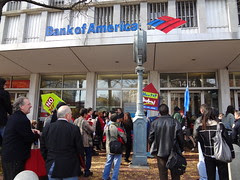 During the financial crisis, Bank of America – where I still maintain a checking account with a minimum allowed balance – received a $45 billion bailout.

You could think that this kind of money is being used to bolster the bank's finances and make their business safer so that the taxpayer won't have to save the bank again. You would be wrong. A few years ago, $45 billion could have been a vital amount of money to save the bank's life. Now, $50 billion is just a piece of trash that may be thrown to a random dumping ground without any hesitation:


The new article above, posted in a domain with a rather characteristic name, capital.gr, describes the Greek way in which the bank is dealing with its capital. They proudly announce that they have already wasted $20 billion on the climate change hysteria. It wasn't enough for the irresponsible and breathtakingly arrogant imbeciles that must obviously control the bank so they will increase the amount to $50 billion to cover the energy efficiency hysteria and to help schoolkids in San Jose to install solar panels – no kidding.


Some of the money will be wasted to "consumer financing of hybrid vehicles", whatever this financing scheme is supposed to mean. In the 2009 video below, via Paul Chesser at NLPC, Jay Leno shows his 100-year-old car from Baker Electric. It's cool and the modern electric cars may be even cooler but the basic thing – how far you can get with one charging and how much time it takes to charge it – hasn't really made any progress in those 100 years. You still need hours to charge it and the reach isn't too different from those 100+ miles that the New York women already enjoyed 100 years ago.

I have included this video and technical data to support my claim that similar "investments" into hybrid vehicles etc. have indeed been and are still being wasted. Banks in particular are totally incompetent when it comes to technologically difficult investments or even research itself – they have no expertise – so it's doubly certain that the money is wasted. As far as I can say, the people responsible for this treatment of the taxpayer money should get a life in prison.

Of course, I don't expect such punishments for evaporating tens of billions of taxpayer money. For example, the UNFCC organization, the branch of the United Nations attempting to "fight" climate change, wants its members to be immune against the conflict of interests and other crimes. These frightening would-be dictators really want to control the world in the old-fashioned Nazi way.

And when you're a chemist in Oregon who realizes that the climate hysteria is bunk, chances are that you will get fired. Lysenkoism isn't just an abstract lesson from the history textbooks.

$50 billion it's a lot of money – four months of artificially keeping the overbloated Greek government monster alive; five LHC colliders i.e. a century of particle physics; many other things. But in other comparisons, it's still a tiny amount of money. The International Energy Agency urges the world to waste $36 trillion – with a "T" – for the cleaner energy hysteria by 2050. Wow.

First, Lindzen's 2008 arXiv preprint Climate Science: Is it currently designed to answer questions? has been finally published in the Euresis Journal (PDF). Read it if you haven't seen it yet.

The famous MIT professor also has a nice 15-page paper in the European Physical Journal Plus,


I was able to read it although, because of the paywall, you may be less lucky.

The introduction is available for free. The public perception of the greenhouse effect is highly schizophrenic, Lindzen explains. On one hand, one needs to use impenetrably complex computer models running on some of the world's best supercomputers; on the other hand, we're told that the underlying mechanism is so obvious it should be called common sense. This schizophrenia extends to the virtually non-existent interactions between theory and modelling. This situation makes the physical underpinnings of the models increasingly unrealistic and physically naive.

In the bulk of the paper, Richard explains that the greenhouse effect isn't obvious and various approximations fail. For example, it depends on a nonzero lapse rate, and therefore the circulation of the air. However, the character of this circulation is complicated. Only above the tropics, the vertical exchange of the air dominates. Outside the tropics, you have to deal with baroclinic eddies (diagonal winds in an atmosphere where both pressure and temperature matter for the local density).

There are lots of interesting physical mechanisms that have something to do with moisture and many other things and that typically depend on the latitude and these effects substantially invalidate the one-dimensional thinking.

A whole short section of the paper, Section 9 on the last page, is dedicated to an argument you may remember from your humble correspondent (Why feedback amplification can't be both positive and high, February 2010). Because the feedback factor determining the climate sensitivity has almost certainly varied over the geological timescales and because the values over one – leading to a runaway behavior – couldn't have occurred at any moment in the Earth's history, it follows that the feedback parameter is actually "safely smaller than one": it's smaller than one minus epsilon where epsilon is a multiple of the typical variations of the feedback parameter.

Consequently, one may say with a high degree of statistical confidence that the factor encoding the amplification can't be much greater than one i.e. the climate sensitivity can't be too much greater than 1 Celsius degree or so.
Luboš Motl v 7:52 AM
Share