During the recent regular lunch together with 27 ambassadors of the EU countries, one Western European ambassador asked me what I thought about the present European dilemma that he saw in the Merkel-Hollande dichotomy and that – in his terminology – was described as "austerity vs pro-growtth measures". The word "austerity" – according to the Great English-Czech Dictionary – may mean "cost-saving measures" as well as "hardship" or "suffering". 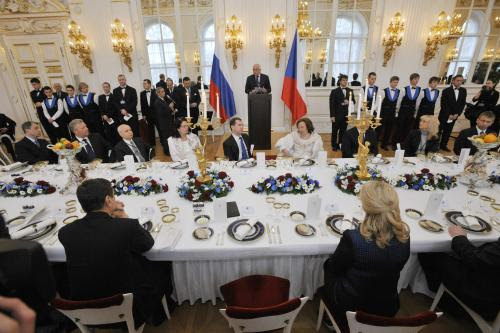 I have mentioned the ambiguous meaning of the word "austerity" for a good reason. The reason is that many European politicians populistically suck up to various critics by their defense of the thesis that we may choose between "hardship and economic growth". However, we don't have such options. The problem can't be defined in this way at all. "Hardship" isn't what the current Europe is all about. The word "hardship" should be reserved for other, genuinely serious situations. We are solving a problem what to do with the fact that Europe has lived beyond its means in the long run and even today, it is living out of a growing debt. We can't allow the interpretation of the efforts to stop the life beyond our means as an invitation to hardship and starvation.


Because Europe has been living out of the borrowed money for a long time, we are facing a serious question when and how the totally inevitable cost-saving measures should be adjusted (and distributed in time). It makes no sense to discuss pro-growth measures in the sense of anti-cost-saving measures. There's no room for such measures in Europe today, more precisely in most of the European countries. These countries haven't been building surpluses in the past so they can't use these surpluses today.

However, Europe has to work on the reduction of its debt and it must do so at a rate that is economically (and socially) tolerable. To do the opposite is not possible. To create new debts by "pro-growth-oriented" expenses of the governments which require new domestic or foreign loans is an utter irrationality. Despite this fact, this is exactly what many unreasonable politicians (and economists) are repeatedly recommending.

In 2012, the Czech Republic will have a budget deficit comparable to CZK 100 billion i.e. USD 5 billion (i.e. we're still living beyond our means) which means that each person (including babies) will see their debt increasing by CZK 10,000 or USD 500 (that's just in this single, allegedly "already cost-saving", year as planned by our reticent finance minister). At this point, I will avoid speculations that our 2012 deficit will be – due to the likely complete halt of the economic growth – even higher than that. Does this increase of the debt mean that we have already started "hardship", as the officials from our labor unions claim, or does it mean that we are only performing very shy expense cuts? But cuts relatively to what? Are they cuts relatively to non-hardship? Or should they be compared with a continuing growth of the public debt which is sometimes inaccurately interpreted as the government's debt even though it is the total shared debt of the citizens?

In the contemporary Europe, there is no "austerity vs growth" dilemma. Instead, the responsible politicians are only working to avoid the increase of the debt which has been growing for quite some time because of the uninterrupted growth of diverse demands and expectations by the inhabitants of Europe (and the Czech Republic). The real problem is the evolution of the demands, the culture of entitlement, and not an "organized" hardship because the growing requirements is something that the people take for granted. The reason of this evolution is undoubtedly the European economically-social model which is promising to the people of Europe – independently of the events in the real economy – the increase of incomes and many other fees, pensions, and subsidies coming from the state. We must admit that the true culprit of the contemporary European economic and social situation is the model of the so-called social market economy itself. This model – and the modes of reasoning that follow from it – had been accepted under the pressure by various European politicians of a certain ideological flavor and these people must be held accountable for the present situation. They must confess that they have been cheating the people and they have been promising the impossible. And we must acknowledge that this scheme of thinking has to be abandoned as soon as possible.

We must also abandon another deception which is the suggestion that a reservoir of certain pro-growth measures is at the disposal of the government. The government doesn't possess any tools of this kind. By its wise policies, it may perhaps encourage the environment of economic freedom, it may deregulate and desubsidize the economy, it may open the markets, it may gradually eliminate various nonsensical burdens from the economy (expenses to fight the global warming claimed to be man-made is an example). Policies of this kind – whether they are very successful, less successful, or unsuccessful – will not lead to results tomorrow or on the day after tomorrow. Despite the fact that their effects are not immediate, we should try to introduce the policies today for us to have a chance to see the effects during our lifetimes.

The author is the president of the Czech Republic and a professor of economics.
Luboš Motl v 9:39 AM
Share