Anthony Watts has brought my attention to the following incredible preprint and a report about it in Nude Socialist:


The first author, Takamitsu Tanaka, summarizes the paper by saying that "This global warming process could have basically quenched the latecomers." Wow. :-) 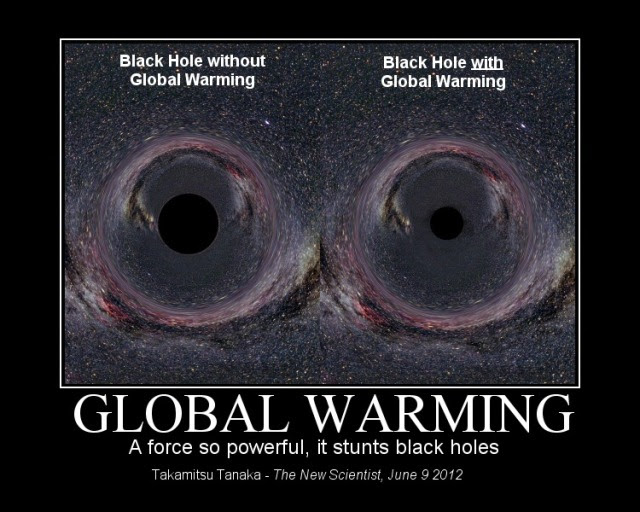 Recall that the term "black hole" was invented by scientists because the scientific culture is racist. Why didn't they call them white holes? ;-)

I haven't yet decided whether or not there is some meaningful core in the preprint – the very claim about the "warming" in the Universe sounds bizarre. One may heat some gas locally but in average, the Universe has been cooling pretty much from the beginning as it was expanding.

At some moments, it was far from thermal equilibrium but if you calculated an average temperature, it would be cooling and not warming at all times.


So I doubt that the paper is excessively interesting or meaningful and even if some good questions about the size distribution of black holes in an ecosystem may be raised, I doubt that the answers are right.

We're not talking about the funny title only; the preprint contains the sentence "As in the case of global warming on Earth..." so it's surely trying to create links with the global warming doctrine.

Astrophysics is somewhat softer a subject than e.g. particle physics but I don't want astrophysics to be sacrificed to this insane cult of hyper-superficial pop science that talks about nonsensical constructs such as "global warming" or "climate change". So I would like if astrophysicists who agree that this kind of research and promotion of astrophysics is unacceptable wrote letters to their colleagues etc.
Luboš Motl v 7:59 PM
Share