ILC to be launched in Japan around 2026

It's more likely than other places and times...

Spanish and Latin American sources just reported that Japan seems to be the most likely place where the International Linear Collider could be built.

When it comes to the design, the project is ready, François Richard, the representative of the European Commission for Future Accelerators (ECFA) said at a conference in Spain today.


The U.S. government seems to be out of the experimental particle physics business and among the remaining candidate places, Japan seems most likely at this point. A significant amount of funding would probably come from China and Korea, too.

If the planning continues along the most likely scenario of this moment, the construction could begin by 2015 or 2016. A firm decision about the location seems to be the main stumbling block right now. The facility will take a decade to be built so expect the first collisions around 2026.

The collider should be able to produce much more accurate and complete data on the properties of the 125 GeV Higgs boson – and other particles of the Standard Model – than the LHC can and it could be better for several other things as well, assuming that Nature will offer us additional light enough particles to be found. 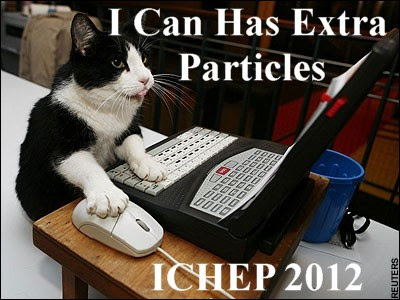 Meanwhile, back in 2012, ICHEP 2012 takes place in Melbourne, Australia, between July 4th and July 11st. It's the greatest experimental particle physics conference of the year. New results and possibly official discoveries of the 125 GeV Higgs boson may be announced over there.

If you need to know what ICHEP stands for, try the picture above.

A character from The Matrix Reloaded who resembles Prof Ben Allanach of Cambridge says that neither CMS nor ATLAS will present any 8 TeV Higgs data in Melbourne at all – because a discovery is a necessary condition for them and there won't be enough data to do so by a single experiment. That's quite a strong claim (the LHC has already collected more collisions in 2012 than in all of 2011 and he seems to say that all of this new stuff will be totally ignored at the largest conference) but Allanach is no moron or outsider which is the only reason I am aware of to pay any attention to his words... ;-)
Luboš Motl v 7:50 PM
Share