First, let me begin with another climate-related story I know from Benny Peiser.

Four days ago, I mentioned two articles in The Guardian, the leading British left-wing daily, that presented the opinions of James Lovelock, the father of Mother Gaia, who now supports fracking, among other things.

The Grauniad's center-right competitor, The Telegraph, didn't want to be out of the game so they just published an article by Prof Fritz Vahrenholt, one of the fathers of Germany's environmental movement and the director of RWE Innogy, one of Europe's largest renewable energy companies (however, ordinary RWE supplies the ordinary natural gas to my home):

The author shouldn't be confused with Mr Fritzl, despite similarities in the name and in the face. ;-) I must say that I don't see any clear difference between my opinions and his.

He was led to check the IPCC claims when he was a reviewer of an IPCC task force on renewable energy in 2010 and he noticed that the work had little to do with science and fact-checking and everything to do with the leadership of Greenpeace. So he figured out that similarly low standards could plague all other IPCC reports, too.

He studied other things and learned about the significant natural variability in the past thousands of years, the likely role of the Sun, and other things. He says that instead of a global warming catastrophe, we may worry about an economic one, but of course he still wants to gradually decarbonize the economy because he still has money in it.

Back to the IPCC

But I mostly want to point out the following article in Nude Socialist.


Fred Pearce, one of the somewhat reasonable environmentalist journalists if this combination of words isn't an oxymoron, is in Rio right now and he wrote this piece:

He discusses some changes that were made to the documents defining the IPCC that were approved in Geneva a week or two ago. They're seemingly unrelated but if you think about it, they are extremely related. All of them are simply stunning.

The first (2009) Climategate scandal was followed by various findings directly linked to the IPCC reports, the untrue statements in them, and various bizarre sources they were based upon. The most well-known among them them was the so-called Glaciergate – someone noticed that a report quoted a scientific paper that predicted that the Himalayan glaciers would be gone by 2035. However, Radio Yerevan later corrected that 2035 should have been 2350 and it wasn't a scientific paper but an informal interview with a mediocre scientist who wanted to impress the other party.

By including this kind of information, the IPCC obviously violated some of its rules and it apologized – something unusual for this organization whose whole activity should be a subject of constant apologies.

Fine, the Glaciergate proved that the IPCC made a mistake. How does the IPCC guarantee that a similar mistake won't repeat again? Fred Pearce has found the answer and it surely sounds as a joke. The IPCC will guarantee that similar mistakes won't occur again by redefining the word "mistake". From now on, it is perfectly acceptable to quote similar sources! The gap between the peer-reviewed literature and alarmist conspiracy theorists' junk has been finally and fully eliminated – if this gap existed to start with. No kidding, just read the text in the Nude Socialist. 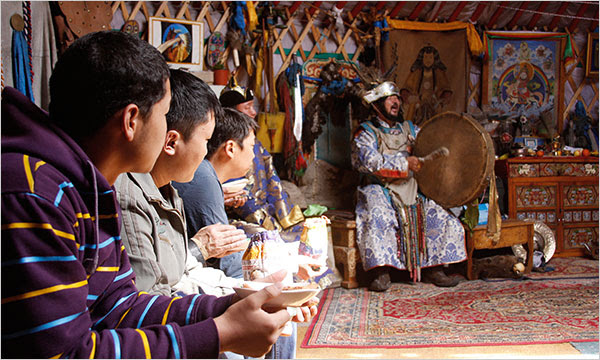 A Mongolian branch of the IPCC

The other, a priori independent decision, was to impose geographic and gender quotas among the members of the IPCC. While you may be pleased that some of the most notorious and irritating white male left-wing jerks will be diluted by this decision, the decision is clearly anti-science. Of course, the IPCC "stalwarts" such as Richard Klein from an institute named – now be careful not to fall through the chair and the floor – Stockholm Resilience Institute says that the decision to fill the IPCC with professional women and professional people of color doesn't really change anything because


[m]embership has always been based on expertise, geographical balance and gender.

Wow. Just to compare, in scientific and any other meritocratic institutions, the membership reflects expertise and other skills but it is color-blind and gender-blind – or the institutions at least formally try to reflect these rules.

The composition of the IPCC will be kind of striking. For example, try to compare science in North America with science in Africa. The amount of science – measured e.g. by citations referring to the papers produced at a given place – that comes from North America (which includes not only the U.S. but also Canada, just to remind you) exceeds science that comes from Africa at least by an order of magnitude (even if we count South Africa and some North African countries where the overwhelming percentage of African science is born).

So in science, the North_America-vs-Africa ratio is at least 10-to-1. Offer more accurate figures if you have some. The best numbers I know are the 2004 high energy physics citation Olympics in which the papers and citations of the U.S. surpassed those of the (by far) best African country, South Africa, by more than two orders of magnitude (i.e. 100+ times). South Africa's numbers were even 2-5 times lower than those of my country, the Czech Republic. I can't recall a name of an African-affiliated scientist and if I could quickly find one on the Internet, she or more likely he would probably be from South Africa (at least, I can name one South-Africa-born scientists in the U.S., warm greetings to Delia Perlov).

What about the new IPCC? Try to guess what the officially enforced North_America-vs-Africa ratio will be in the 30-member IPCC bureau. Africa will have 5 members and all of Northern America will have just four! Instead of 10-to-1, you get 4-to-5. I am not kidding. It's totally unbelievable. The member ratio deviates from the reality by orders of magnitude, highlighting that the actual purpose and driving force of the IPCC isn't science. The heart of the IPCC is radical left-wing ideology, wealth redistribution, and the suppression of the advanced capitalist civilization (that can still make a few Western people as rich as some of the third-world dictators).

Ms Thelma Krug, a Brazilian activist who has only authored one paper in her life with at least 15 citations and the paper has 11 other co-authors, is excited about the change because it will strengthen the influence of "scientists" such as herself. She said the "changes will correct geographical biases that have skewed past assessments".

Now, the radical unhinged leftists who support the IPCC may have no problem with this reform of the IPCC. But does the IPCC expect that this will be tolerated by the sane Americans, those citizens of the U.S. who kind of realize that the scientific edge of the U.S. relatively to Africa and even Brazil is just overwhelming? How much can a sensible citizen of a Western country trust the IPCC if the IPCC deliberately struggles to be dominated by third-class and third-world scientists?

I am just baffled by these questions. Some years ago, someone would dare to say that the IPCC contains the world's best scientists. Now, the very rules of the IPCC explicitly say that a majority of the IPCC bureau and other key organs has to be composed of sub-par scientists. It is incredible, isn't it?

In previous paragraphs, I have hopefully clarified what all the decisions to the official IPCC documents have in common. They mean a complete extinction of meritocracy and excellence that may have been scratching a living somewhere in the corners of the IPCC so far. Fred Pearce's article includes one more specific sentence that combines the "third world" and "grey literature" and presents them as parts of the same theme.

Ms Thelma Krug says that it's harder for third-world scientists to get their articles into peer-reviewed journals so it's fair that the "grey literature from the third world" may be used along with the peer-reviewed literature from the West. So the IPCC may use peer-reviewed articles by Western authors but if they're not enough to make the point the IPCC wants (and is predestined) to make, and be sure that they're usually not, superstitions from developing countries are just fine, too. Again, no kidding.