If you need to raise your blood pressure, here is the newest tool. 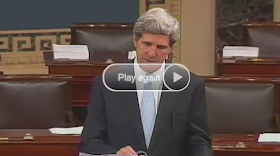 Click to get to the page with the video.

The links point to The Hill and they are here:


I have lived in communism for years but I have never listened to a similarly fanatical, ideologically motivated speech.

What he says is both ideologically motivated as well as untrue. It is not true that people like us want delays and backpedaling. What I want is to punish the criminal activity of certain climate alarmists as soon as possible.

It is somewhat scary to see a politician whose scientific credentials are zero – Kerry studied political science and his knowledge of natural science is truly non-existent – to use his political power for threatening the people who actually know lots of science just because their knowledge is politically inconvenient for this would-be green Gestapo cop.

I don't think that his behavior should be tolerated.


I urge Americans to use all legal tools they possess to give a proper thrashing for this nasty dishonest arrogant left-wing jerk and liar and to make his egregious mouth unusable at least for a few months or years.

Imagine that this piece of aggresive uneducated trash could have become the president of the United States of America. Imagine what he could have done. Based on his speech, he could have outlawed the very proposition that the opinions about a looming climate catastrophe are psychopathological delusions of lunatics. People resembling this "just another Gore or Unabomber wannabe" would be deciding about energy policies, about millions of jobs, about tons of new taxes, about the very freedoms including the freedom of speech, about the atmosphere in the institutions of education, and many other things.

Desperate about the fact that this climate method to achieve a huge shift of the society to the left hasn't worked and doesn't seem to work in the coming years, either, he has used lots of unbelievable words. Aside from "disgraceful denial", he complained about the "naysayers" (the word appears 10 times in the speech!) and the "conspiracy" [of "silence" and related things] 7 times: search for this word in the full transcript. Do you agree it makes him a conspiracy theorist?
Luboš Motl v 7:12 AM
Share