A few weeks ago, I downloaded Windows 8 Release Preview and tested it inside the VirtualBox: here's how. 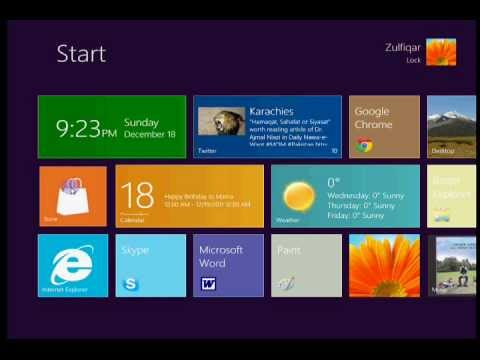 It's a great Windows operating system. The newest feature is that there's an independent user interface (aside from the Windows desktop) behind everything – the Metro UI – in which you have dynamically updated square or rectangular tiles which you may drag back and forth in the way you know from iDevices. Clicking at them opens full-screen minimalistic iPad-style applications.


There's some kind of a tension between "serious users" of computers and those who want "intelligent gadgets" as tools for entertainment and ordinary communication. The latter makes the iPhone-like user interface more natural: it's primarily designed for the stupid and lazy people, after all. These consumers represent most of the mankind and the dominant market and each of us belongs to this group at various moments. This user interface has lots of advantages for common situations – and one may be surprised to learn that a high percentage or most of the things we do with mobile gadgets are "ordinary".

However, sometimes you need to seriously work. You need – or at least someone else needs – all the functions you have known from the PCs. That's where things like iPad may start to look inadequate – unless a perfect application has been created to do really everything you need to do. Of course, a gadget that can do everything that a computer can is preferred in such situations. Given the strength of their hardware, you may often find it illogical that the Apple devices don't allow you to do everything you expect from computers.

A week ago, Microsoft has presented its Microsoft Surface tablet – not to be confused with the older Microsoft Surface at a Table which is now known as Microsoft PixelSense. Because everyone has already absorbed the improvements in Windows 8, what they were showing was primarily the hardware. And it looks like a nontrivial piece of work.

In the 47-minute presentation above, Steve Ballmer reviews some history of hardware at Microsoft, before the specialists (starting with Bruce Willis' twin brother whose Microsoft Surface freezes but he quickly picks a new one). They invented the Microsoft mouse, the first truly commercially successful one, among many other things. And it began with bad ratings! But what's fun about this Microsoft Surface tablet is the melted magnesium chasing and cover (VaporMg) which is light and resilient and various details about the integrated stand, the cover which also has a keyboard in it, magnetic hinges to attach it so that the sound of the "click" is also optimized, the user-friendliness-optimized ways to reconcile fingers with digital ink, and other things.

I think that many of you did notice that hardware is often suboptimal when it comes to various details. You must have been sure that things could have been much more clever or more convenient (despite a nearly identical price) if something had a different shape, was differently attached, was turned on or off automatically when you do something, and so on. It's good that some people are paid to seriously investigate such "details" before they release the product.

Of course, none of these things guarantees the commercial success. We will see whether Surface will share the fate of Windows which was a kind of success; or the fate of Zune, Zune MarketPlace, or KIN-one and KIN-two phones which didn't really make it when it came to the dollars. In the case of the KIN phones, the products survived for a few months only...
Luboš Motl v 11:32 AM
Share