The Sun will go red giant in 7.5 billion years but long before that moment, in about 4-6 billion years from now, "we" will be reminded of a neighbor we considered so well-known yet so detached. 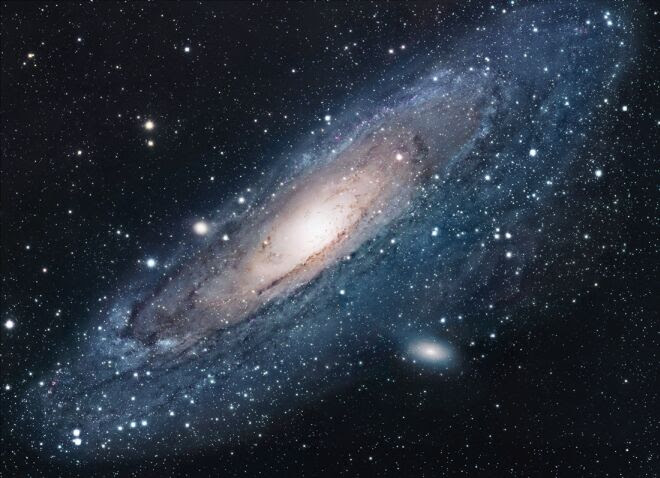 As The Telegraph and others told us minutes ago, new accurate NASA measurements which employed the good old Hubble lead to a seemingly "scary" conclusion.


Our galaxy, the Milky Way, will crash into the Andromeda Galaxy before the Sun will go red giant. The picture of the galaxy above will be getting closer and closer before it starts to merge with the Milky Way. At some point when the Andromeda stars get to our vicinity, "we" will see that the night sky is transforming dramatically. Each thousand of years, something changes substantially as the locations of many stars change by more than a light year. ;-)

But you shouldn't scream that the sky is falling. This collision of objects as diluted as the galaxies isn't much different from your country's entry to the European Union. It shouldn't really affect the individual stars and their solar systems substantially.

The Sun will be located and moving at another place in the future confederate Milky Andromeda Galaxy. But chances are high that neither the Sun nor the planets will collide into any intruders from Andromeda. Note that the Earth is just 8 light minutes from the Sun while the distances between adjacent stars are about light years. You should actually square the ratio to get an estimate of the probability that something important will perturb the inner corners of the Solar System.

The Andromeda Galaxy has about 1 trillion stars while the Milky Way has 3 times fewer; so we're the smaller guy, the DDR of the German reunification. But the ratio between the galaxy sizes is much closer to one than for typical collisions. The current distance between the galaxies is about 2.5 million light years so you see that since the birth of Jesus Christ, we have gotten about 1 light year closer to Andromeda.

Is that a really bad luck that our galaxy crashes another one or is it common?

The actual volume occupied by the galaxy whose radius is just 70,000 light years which is of course much smaller than that. But over the billions of years, the galaxies probe different relative positions and this motion increases the chances that they collide at some point. A relative position is changed by something like 140,000 light years in 280 million years or so. Each 280 million years, a galaxy gets another "fully independent" chance to collide with another one.

Well, the Universe will only be 20 billion years old so less than 100 of such "chances" are given to each galaxy to collide with another one. This number 100 still seems much lower than the relative volume occupied by galaxies, something like 70,000 divided by 7 million, everything cubed, which is 1 million.

So this uniform estimate suggests that it's indeed a bad luck, 1 in 10,000, that we collide another galaxy. However, the clustering of galaxies makes the odds substantially higher. However, I still believe that only a minority of galaxies experiences a similar collision.

This was about the future 4-6 billion years. Now, the past centuries. I spent quite some time by browsing pictures of the Old Royal City of Pilsen, and the Very Old Royal City of Pilsen, too. ;-) What may have inspired me was the demolition of the Palace of Culture, the "House of Horror", a socialist building that just didn't make it. The demolition was completed a week ago. It's just fascinating to look at places you know intimately well how they were changing throughout centuries and decades.

See George Krejci's collection (he's an old Czech American guy) and a smaller Tomato iToday collection. Pilsen used to be so elegant – and during socialism, it has looked like a city right after the war for 42 years. It's amazing how the communists screwed any visual decency and converted a city of proud aristocrat-equivalents to a city of barely alive workers who are satisfied with basic needs, something that was clearly improving after 1989 again.
Luboš Motl v 12:19 PM
Share