Matthew W. Cahill-Rowley, JoAnne L. Hewett, Ahmed Ismail, and Thomas G. Rizzo have looked at millions of phenomenological MSSM models (to be explained later) and they have found some "totally ordinarily looking" models which are not fine-tuned, which have light superpartners, and which are compatible with the 125 GeV Higgs boson as well as all published constraints on SUSY:


The Higgs Sector and Fine-Tuning in the pMSSM

Just to be sure, our ignorance about the precise way how SUSY is broken in the MSSM may be quantified by 100+ parameters. There is a subspace of this parameter space that has 19-20 parameters, the phenomenological MSSM or pMSSM, in which we require no new sources of CP violation, minimal flavor violation, degenerate 1st and 2nd generation squarks and sleptons, and vanishing A-terms and Yukawa couplings for the first two generations.

The LSP is the gravitino or a neutralino in these models. Incidentally, I've been thinking about the possibility that the LSP is charged, a stau, and we observe lots of "very heavy" hydrogen atoms (with the same spectrum) that have a stau or antistau in the nucleus which makes them hundreds of times heavier than the ordinary hydrogen atoms. Chemically, they're indistinguishable but their extra mass could replace dark matter, couldn't it? The main problem is that one would probably get too much of this stuff as the staus wouldn't be good enough in annihilation...

At any rate, starting from page 36, they showed the superpartner spectra of models that are not only compatible with all published measurements including the 125 GeV Higgs boson but that have also an unusually low amount of fine-tuning, \(\Delta\lt 100\). Here is the first one they show: 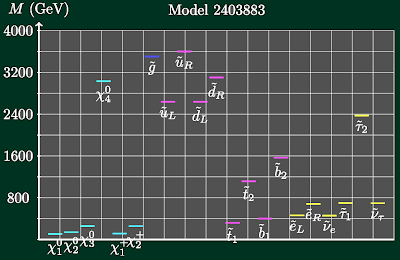 They offer 12 other charts like that – and each of these models looks substantially different from others. Note that many superpartner masses are well below 1 TeV in these models.

The last sentence of the paper brings an upbeat message:


Hopefully the LHC will discover both the light Higgs boson as well as the 3rd generation superpartners during its 8 TeV run.


Not bad because the first condition is likely to be satisfied in 7 days from now. What about the other one? Does the democracy between these two hopes suggest that they're aware of a 3rd generation rumor that is comparably strong to the widely known July 4th Higgs rumor?

Of course, if you believe that one of these models is right, you may ask: Why would the correct point in the MSSM moduli space try to imitate the non-supersymmetric Standard Model as well as it apparently does? In other words, why would the right supersymmetric model be one of those that require the longest amount of time to be discovered by the LHC – which seems to be the case, kind of? That's a good question but I would like to emphasize that it is a question. There is no proof that there can't exist a good, intuitive, qualitative answer. There may very well be a good reason.

If you agree that a phenomenologist should try to reduce the amount of fine-tuning, each of these models is much more acceptable than the Standard Model whose fine-tuning is extreme, despite the fact that one has to choose "the best model among 100,000 candidates" (which is not too much). On the other hand, if you think that this whole \(\Delta\)-counting and naturalness arguments are wrong and you prefer minimality, the Standard Model is your golden standard.

If the LHC continues to find no new physics, the latter position – the Standard Model – will be getting stronger relatively to the first one (if nothing else happens that would change the odds, of course). However, this drift is extremely slow. Whenever you reduce the surviving fraction of the MSSM parameter space by another factor of 2, you are effectively finding something like new 1-sigma evidence against SUSY. However, at the same time, people may use completely different theoretical or experimental methods to find some new 2-sigma evidence in favor of SUSY. So the exclusions of mild "majorities" of spaces isn't too strong an argument.

BTW if you haven't had a breakfast yet, it's very important for you to prepare it in a politically correct and mathematically correct way. Concerning the second condition, you have to cut the bagel in such a way that it is transformed to a pair of mutually linked tori. ;-) Instructions may be found in the video above. The essence of the procedure is familiar to those who have cut the Möbius strip in the middle and repeated the same process with the resulting non-Möbius, doubly twisted strip.
Luboš Motl v 8:59 AM
Share