There are various interesting papers on the arXiv today, including new proposed models (based on NMSSM) for the 130 GeV Fermi gamma-ray line. One of the papers notices that the CP-odd Higgs mass is cutely and accidentally close to 260 GeV which provides the WIMP pairs with a resonance. 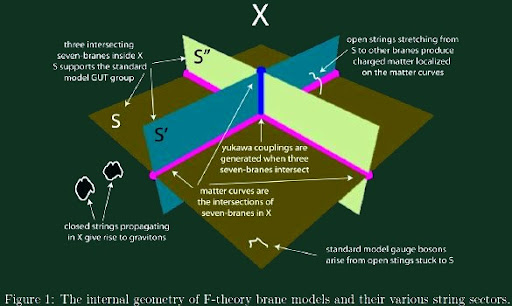 But I feel that this blog has been excessively flooded with articles about possibly emerging hints of new physics at the LHC, in the Fermi telescopes, direct dark matter searches, and others. While those things are appropriately exciting for this experiment-driven era and I am very excited about almost all of them myself, it's also plausible that none of the hints will survive the test of time. It's conceivable that Nature has prepared nothing new for us to see by the ongoing experiments. Despite the screaming of the sourballs, fundamental physics – the search for the deepest explanation of the known effective laws of physics – wouldn't be over if this conservative scenario were right.

In his fresh article, Bayes and String Theory, Phil Gibbs quantitatively explains why the non-discovery of SUSY by the LHC would have a smaller impact on the odds that string theory is right than the discovery of SUSY. I agree with his maths and words, of course. But what I want to discuss a little bit is a new paper about string models that predict there is no new physics in the ongoing experiments, thus showing that the non-discovery doesn't contradict string theory (whether or not we would wish string theory to tell us clear answers to everything right now):


The Intermediate Scale MSSM, the Higgs Mass and F-theory Unification

Luis E. Ibáñez, Fernando Marchesano, Diego Regalado, and Irene Valenzuela elaborate upon one of the most neglected possible explanations why the 125 GeV Higgs boson is somewhat heavier than the garden variety models with low-energy supersymmetry.


People either add new particles or play with the stop squark mass matrix, by increasing the mixing etc., but a possible answer we shouldn't forget about is that the Higgs boson is relatively heavy because supersymmetry doesn't actually survive down to low energies. It may be broken at a higher scale.

They try to give the most straightforward answer to the question


What is the supersymmetry breaking scale according to the actual top-down string theory as we know it and its known mechanisms, i.e. using as little experimental and bottom-up data as possible?

They decide that the figure is\[

\] This scale – not to be confused with a defunct German paramilitary organization – is very high relatively to \(8\TeV\), the center-of-mass energy at the LHC in 2012. Interestingly, if we also demand grand unification, the grand unification scale is\[

\] which is higher than the supersymmetry breaking scale but it's not vastly higher, as we're used to. In fact, it is almost two orders of magnitude lower than the GUT scale in the models that prevail in the literature.

With such a low Higgs scale, you may be worried about too speedy proton decay via dimension-six operators. This threat is argued to be absent due to the segregation of the fermionic species in the extra dimensions which is a bonus feature brought to us by the hypercharge flux (as employed in F-theory model building) that breaks the \(SU(5)\) symmetry down to the Standard Model.

Also, these models predict an axion with energy scale\[

\] and the resulting axion of mass\[

\] seems like a viable dark matter candidate that could replace the LSP (neutralino etc.) which is obviously out of the game. If you care, the two-Higgs angle satisfies \(\tan\beta\sim 1.2\to 1.4\).

Dark matter could be composed of axions. One advantage would be that the Universe would be nicely clean because Axion is the ultimate grease stripper.

This scenario to embed the world in string theory is kind of elegant but it may be disappointing, too. It would imply we will probably see no new physics in a foreseeable future and all the hints of new physics (except for the \(125\GeV\) Higgs boson, of course) will go away. Well, this is not quite accurate: they mention that microwave cavity experiments (e.g. the upgraded AMDX experiment) could actually detect the signs of the axion. The observation of a decaying proton would produce some weak evidence (and extra data), too.

However, the unbearable lightness of the God particle is left unexplained. One must refer to the only known non-high-energy explanation of the hierarchy, namely the anthropic principle. The Higgs boson – together with other particles – is so light simply because there would be no life if it were heavy. Life on a planet like Earth requires large enough and long-lived stars and if you ask where the large dimensionless numbers such as "the number of atoms in a star" come from, you will realize that they boil down to \(m_\text{Planck}/m_\text{Higgs}\) which is also large. Well, in some approximations, the largeness of celestial bodies boils down to \(m_\text{Planck}/m_\text{QCD}\) whose large size is already kind of explained by the log running of the QCD coupling but let me not discuss these subtleties here.

What is new about about their approach is the "lukewarmist" approach to the anthropic principle. They want to avoid it and replace it by more quantitative, explicitly calculable equations or mechanisms. On the other hand, they are ready to use it to explain a remaining hole. On the first hand again, if they use an anthropic argument anywhere, it doesn't mean that they give up the explanations of all other patterns we see in Nature. Many things may still have good reasons that boil down to old-fashioned physics.

While I am not thrilled by this picture (it's better than the dumb orthodox anthropic attitude but less appealing than the fully anthropics-free setup), I admit that this is a plausible attitude that may get more widespread in literature of the future (because it may be picked by Mother Nature) as the passionate and polarized conflict between the anthropic believers and anthropic skeptics cools down. It's plausible that the tiny cosmological constant and the lightness of the Higgs does require an anthropic explanation and nothing or almost nothing else does.

It seems to me that all physicists doing similar things should try to think about the following question. If you were told that the anthropic reasoning is "partly relevant" in Nature, how would you separate the problems for which they play a role from those where they don't play a role so that the separation doesn't look arbitrary? Is it about the numbers' being really really large? Or is it about the small parameters' being dimensionful? Is there some deeper starting point you could use to provide us with an explanation why some things obey the anthropic logic while others don't?

Even in the absence of convincing answers to these questions, I hope that people won't be afraid to discuss models morally similar to that of Ibáñez et al.