TRF mobile template may be right for you

In recent two weeks, the template of this blog has undergone a larger number of changes than it did in previous 3 or so years combined. What we have primarily changed is the provider of the comments.

Instead of two commenting systems that have co-existed for 7 years – built-in Blogger.com "slow" comments and the Echo/JS-Kit/Haloscan "fast" comments that will go out of business in 3 months – we have a new system, DISQUS 2012, that didn't exist at all.

DISQUS has many features including the ability to login using various social services; register with DISQUS and control your displayed nickname as well as your avatar; sort comments from newest/oldest/best-rated by clicking at the "Discussion" in the upper left corner of the DISQUS section; upvote/downvote comments and star favorite blog entries; subscribe to the RSS feeds for particular comment threads and share the blog entries (via the gear in the upper right corner), and many others.

You are invited to go through the menus and study the system a little bit because it is pretty powerful. A reason you may want to have a DISQUS account is that this commenting platform is currently used by approximately 750,000 other websites in the world. No picture-based smileys, sorry. I can't really redefine that because the DISQUS comments appear in a separate iframe to be screened against the users' screwups – which I actually consider a good policy.

The transition to DISQUS – especially the 3-level reparameterization of the wrong URLs in the exported Echo XML file with the 73,842 old comments – has been a pain in the neck. But when it's finished, it has actually simplified, streamlined, and improved many technical subtleties. One of them is the following: you may remember that the users who visit domains such as motls.blogspot.cz – anything outside *.com – where they're automatically redirected from motls.blogspot.com got independent discussion forums that no foreigner (from their viewpoint) and not even your humble correspondent could have seen.

Switching to the *.com URL or the pirate icon were the only fixes allowing one to participate in the global debates.

However, this problem no longer occurs with DISQUS. The national editions of this blog where you're redirected actually seem identical at this point; correct me if I am wrong. The website looks so flawless to me – independently of the domain – that I have actually changed my personal bookmark for this blog to motls.blogspot.cz to respect and celebrate the nationalization imposed by Google (which was done in order to be more compatible with the local laws, something that I essentially consider a good idea as well although the censorship is so far purely hypothetical). The only bug of the nationalization I am aware of is that Alexa.com (and probably others) understates the traffic on this website by a factor of 2+ because it only counts the U.S. visitors. But I don't really care.

Mobile template brought up to date

Today, I have fixed two major imperfections of the mobile blog template which is the default template shown to the mobile visitors, especially those with iPhones – but it is available to everyone else and many ultraconservative people (when it comes to the layout) may actually prefer it. Why?

Just to be sure, the mobile template is available if you add ?m=1 right after .html in the URL (or after .com if there is no .html). You are encouraged to try it if you have never tested it: click the iPhone icon on the left side of the previous paragraph. The switch may be inverted, too: if you happen to be sent to the mobile template and you prefer the proper dark-green desktop template, attach ?m=0 instead of ?m=1 to the URL (or click at the "View web version" at the bottom). Because some people won't try the mobile template, I will force the basic "experience" with it upon them. The mobile users see something like this: 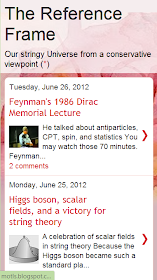 Oops, in the lower left corner, you actually see that I have used a normal Chrome in Windows to take the screenshot. ;-) But it's really the same thing. The comment counters on the main page will only show the right number under the blog entries posted from today; the "upper" comment counters on the individual item pages will remain dysfunctional for a long time but there is a correct counter right beneath them, anyway.

The mobile template decided to show the "slow" built-in Blogger.com comments until today; in particular, Echo comments weren't available from the blog's URL to the mobile users. The fix turned out to be easy but it's only easy if you know how to do it: I had to add an attribute

to the relevant DISQUS widget in the Blogger.com template: "yes" belongs to the list of alleles "yes", "no", "only" that indicate whether the widget should appear for mobile or desktop users or both. Starting from today, the visitors using the mobile template may read and contribute to the same discussion in the DISQUS comments as the visitors of the dark-green desktop template.

Another feature that may have repelled you from the mobile template was the missing \(\rm\LaTeX\) mathematics served by MathJax. We have used MathJax for almost a year and it has made many technical blog entries that contain mathematics look much more readable and professional. I managed to fix this problem, too. It's been tested: even my iPod Touch 3rd generation displays the right mathematics even in the mobile template. Try the stringy Higgs article (mobile) as an example.

The loading of MathJax in the mobile template was a bit nontrivial. Instead of the javascript in the head of the document, I had to add a script in the body that dynamically loaded a new element into the head, including the script. As a result, all backslashes in the definitions – for example the macros for \GeV or \LL – had to be replaced by a quadruplet of backslashes, e.g. \\\\mathcal L. The two doublings come from embedding the backslash in a script and the resulting script as a string into another script. ;-) But it apparently works; let's hope that we won't need 60 additional doublings in the future because it would be a lot of backslashes. If you see an error in maths somewhere, let me know.

The loading of maths slows the website on iDevices, of course, and it makes the iDevice eat more energy from the batteries. If you want to view the blog entries without MathJax and without DISQUS comments under the article, use some of the feeds that are linked behind the specific feed icon, e.g. above "who is lumo" in the sidebar.

If you summarize the improvements above, they imply that the mobile template with ?m=1 may actually be right for you; it has almost everything you need. This is especially the case for users who suffer from a particular form of racism that makes them prefer black-on-white over white-on-black or white-on-dark_green text (I slightly prefer the latter – and that's how my Commodore 64 and early PCs educated me and that's why I chose the template the way I did – but I am not obnoxious enough to visit all websites with different color combinations and scream at the webmasters that they're ugly idiots: this won't be tolerated anymore here, either). Users who just hate all widgets may find the mobile template superior, too.

With the mobile template that the lovers of ultraconservative layouts and the color-combination racists may prefer, I consider the question of the "basic style" of the template to be solved and closed to criticism, at least for some time.

Finally, I want to mention that the blog entries print beautifully. Not only the printer avoids all unnecessary and universal widgets; it omits the whole sidebar and focuses on the item-specific content only. Meanwhile, the mathematics is printed perfectly, with an arbitrarily high font resolution. Here are two examples. If you just print the stringy Higgs article – to a PDF, in my case – you will obtain the following two resulting PDF files:

The last one in particular looks rather professional, doesn't it? Note that the animated four-dimensional K3 surface on page 10/21 is only moving if you print the PDF on an animation-enabled and higher-dimension-equipped paper which is pretty expensive so far but that's only because most producers of paper haven't quite internalized string theory yet.
Luboš Motl v 2:06 PM
Share