A week ago, I discussed an intriguing excess of events in the CMS' search for top partners. Some graphs showed clear excesses that were not discussed in the paper and unusual arguments to ignore parts of the parameter space were employed.

What about the CMS' competitors, ATLAS? Do they see some stop-squark-related excesses in the published preprints, too?


ATLAS recently released several searches for stop squarks. Let me look at the following one which is 2 weeks old and based on 4.7/fb of 2011 collisions (much like many newest papers by both collaborations, including the tantalizing CMS paper a week ago):


The CMS paper has used events with missing transverse momentum and many jets. The ATLAS paper discussed in this blog entry requires one isolated lepton in addition to the jets and missing energy.

These events are selected by 5 filters – signal regions A,B,C,D,E. As you march towards higher ASCII codes of the letters, you are increasing the required minimal magnitude of the missing energy and other things. The inequalities are imposed on \(E_T^{\rm miss}\), the missing transverse energy; its ratio with the square root of \(H_T\), the scalar sum of the four selected jets' momenta; and the transverse mass \(m_T\) defined in footnote on page 3.

The conditions for the signal regions are as follows:\[

\] Now, what are the results? The Standard Model predicts a background, mostly events with \(t\bar t\), sometimes perhaps with an extra vector boson, or perhaps a single top, or multijet events. The total background expectations and the actual number of observed events are summarized in the table below:\[

\] By the way, you should adjust the font size in your browser so that you see all columns but there is not much space left after column SR E. (This only holds for the dark green template!)

You see that most of the columns are compatible. But look at the last column, the signal region E. There were \(1.8\pm 0.7\) predicted events but they observed \(5\) events. That's an excess. They have quantified it by the \(p\)-value of \(0.015\) which means that if it is noise, such noise (or larger noise) should only appear approximately in every 67th measured number. As evidence for a signal, it's almost 2.5-sigma evidence.

I find it irresistible to amuse you with the exclusion plot that ATLAS could derive from the signal region E. 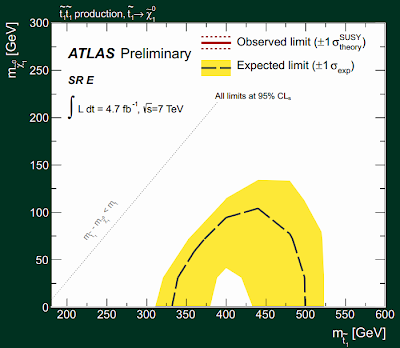 The black dashed line is the expected exclusion curve (we expected to exclude the half-disk inside the contour). The actual exclusion derived from the observed data is represented by the red line. Oops, where is the red line? ;-) ATLAS seems a bit more calm than CMS when it answers this simple question in the caption:


Note that in SR E there is no observed exclusion limit due to an excess in data.


Nevertheless, the section "Results" still concludes that "No significant excess of events is found", despite the 2.5-sigma excess in the signal region E. Is that legitimate to say that a 2.5-sigma excess in the last channel isn't significant? It depends on your conventions. Time will be giving us an increasingly clear answer on whether or not Nature forgave them this cavalier attitude in this particular case.

Now, the ATLAS and CMS searches are different in details so we shouldn't combine them. One should still mention that if one got two 2.5-sigma excesses, the overall significance level would be about 3.5 sigma. And that's just the combined 2011 LHC data in one channel. If one also adds those 7 inverse femtobarns already recorded in 2012, the combination from both detectors could easily make a 5-sigma discovery if there's something to be discovered...

If the signal is real, the ATLAS+CMS detectors in 2011+2012(part) have already witnessed about 25 events in the signal region E, instead of the expectation of \(9\pm 1.6\) or so. And that would be quite some evidence of new physics. After the 2012 run, the numbers from previous sentences will hold for each detector separately while the overall LHC score in SR E will/would be 50 events instead of the predicted \(18\pm 2.3\).

If some of those five events are due to stop-squark-related physics, note that the new physics only kicks in for missing energy above \(275\GeV\); see the definition of the signal regions at the top. That could be compatible with the idea that the missing energy is stored in two neutralinos. If the mass i.e. minimum energy of one neutralino is \(140\GeV\), as extracted from the Fermi gamma-ray line and other guesses, the new events should indeed emerge above \(280\GeV\) or so of missing energy. 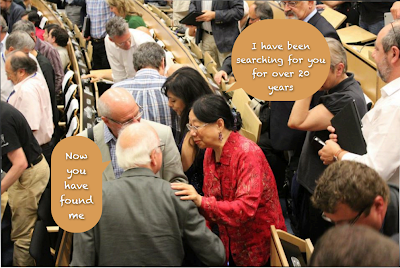 Looking for the truth covered by some noise is fun once it's clear that there's some "nearby signal" represented by the noisy data. Here's an everyday-life example.

Minutes ago, I was asked to find two addresses in Ontario on Google Maps. I was told that they're in Cambridge, a neighborhood of Toronto, and the addresses were


Search engines have no clue how to "automatically" correct all the mistakes – and believe me, the spelling of "Cambridge" is just the beginning. So I had to find out that Cambridge isn't a real neighborhood of Toronto, unlike the case of Boston's Cambridge: it' 50 miles away!

And the right addresses were


Note that a larger number of corrections had to be made almost simultaneously. I decided it was easier to start with the postal codes. Still, I needed to permute "3" and "C" in the first one, and reinterpret "O" as "0", and add a dash.

In the other address, "I" had to be reinterpreted as "1" – something I tried deliberately because I know that Czechs can't possibly understand that a simple vertical line of North Americans means "one". For a similar reason, "1" had to be changed to "7" because Czechs can't possibly understand that if the vertical line has an extra broken part on the left side, it can no longer be a "one" under any conditions: it becomes a "seven" regardless of the precise direction. ;-)

With these postal codes fixed and the neighborhood checked, I could also find out that "Cr" should have been "Cir" and "Baric" (probably a brother of Mladič or Miloševič) should have been "Barrie". :-) Time will tell whether similar final steps towards finding the truth also await us in the case of the stop squarks soon.
Luboš Motl v 10:12 AM
Share