CO2 may lag temperature just by 400 years or so

Phys.ORG is among the most science-oriented outlets that inform about the new paper

by Pedro, Rasmussen, and Ommen published in Climate of the Past. The content of the paper is simple.


They looked at the Antarctic data between 17,000 BC and 9,000 BC (to help delayed readers of this blog in the year 3000 AD, I express the timing relatively to Jesus Christ instead of our humble present). The CO2 concentration increases or decreases after the temperature does the same thing but the newly determined lag is just about 400 years instead of the figure 800 years we loved to repeat.

However, it's also much shorter than we used to say. It means that the excess CO2 we are adding into the atmosphere disappears much earlier than those 800 years we used to promote. Based on the currently observed CO2 budget, it seems obvious to me that the excess CO2 in the atmosphere would be reduced e-times within 50 years or so, much shorter even than their estimate of 400 years. But the motion of CO2 could have been slower when (and where) the Earth was cooler and less hospitable for life.

(Again, it's easy to calculate the 50-year figure. The amount of CO2 we are emitting would increase the CO2 concentration by 4 ppm a year. The actual observed increase is about 1.9 ppm in average. So it's clear that Nature – oceans and the biosphere – are absorbing 2.1 ppm out of the excess CO2 every year. This absorption only depends on the elevated concentration because that's the only thing that the oceans and plants "feel". So it would continue even if we stopped all CO2 emissions. Consequently, CO2 would start to drop by 2.1 ppm a year although the decrease would be gradually slowing down. The current excess CO2, 393-280 ppm = 113 ppm or so, would be largely undone in 50 years or so. The CO2 concentration would quickly return to the level compatible with the equilibrium given the current interglacial temperatures – and it makes no difference whether you add the tiny man-made contribution to the interglacial temperatures or not. The modest warming arguably caused by CO2 would be undone in those 50 years, too.)

Of course, no outlets actually explain that this finding makes the hypothetical "CO2 problem" twice (or more) less long-lasting a problem. The environmentalist journalists only inform about bad news and true or hypothetical yet untrue effects of the industrial activity. In fact, if you look at the titles of articles that inform about the paper by Pedro et al., all of them effectively want the reader to believe – or continue to believe – that the research suggests that CO2 causes changes in the temperature even though the truth is the other way around.

There are many journalists who spin everything to help criminals such as Al Gore to remain at large. 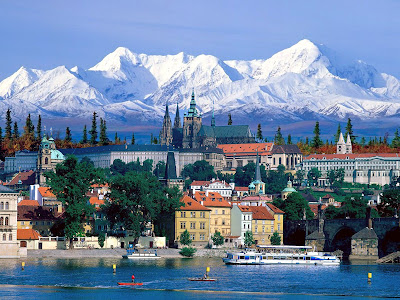 Prague as Joseph of Canada remembers it

That's also the case of the newest hysteria about the Greenland. It's been warm in the Greenland in recent weeks so a thin surface layer across the 97% of the are of the island melted a bit. The same thing occurred a century ago and possibly much more frequently than that. But we're almost told about an apocalypse by many journalists.

Needless to say, there's nothing remarkable about such a percentage. First of all, it's just a thin layer, so much much more is needed to transform the Greenland into a green land again. Also, the percentage of the Greenland experiencing surface melting at a given July day (throughout the history) is (50 ± 20)% so the excursion towards 97% is a 2+ sigma effect that is guaranteed to occasionally happen by the laws of statistics. When forced to say the truth, even those folks admit that the same thing happened in 1889 when the industrial activity was negligible and given the expected frequency, this event is right on time. 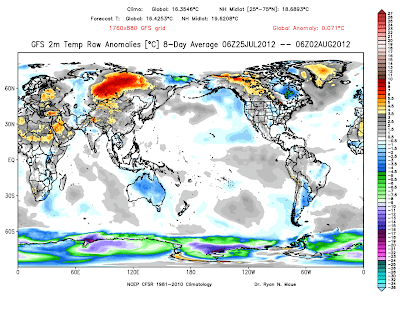 This is my copy of the temperature map. It will not evolve with time. Click to zoom in.

The degree of cherry-picking and dishonesty in this story-writing about the Greenland has breathtaking proportions in the eyes of those who are following the current temperature anomalies across the world (see TRF for more current maps). More precisely, the link in the previous sentence shows the temperature anomaly averaged over the next 8 days. It's a prediction but the meteorological models at this timescale and this spatial resolution work almost flawlessly.

You see that the bulk of the Greenland is yellow, kind of +4 °C warmer than the long-term average for this date. You find a similar, even warmer, region in central Russian Asia. However, what the journalists don't say is that Eastern Canada, Australia, and Chukotka are among the regions that are symmetrically –4 °C cooler than the normal temperatures right now. The spatial variability of the temperature anomaly is normal, too; 250 years ago, you would get qualitatively similar maps.

And the focus on the Greenland is even more remarkable if you look at the Antarctica – which is 6 times larger a territory than the Greenland. The prevailing green color shows that the freezing continent is actually about –7 °C cooler than the normal and if you look carefully, especially at the violet colors near 70°E, you will realize that there are regions of the Antarctica that currently experience temperatures more than –20 °C cooler than the normal temperatures for this date! (Please don't double count the signs. I wanted the adjectives to be "natural" and the figures to show the sign of the anomaly, too.)

This is five times larger an anomaly than the anomaly in the Greenland and the continent experiencing this freezing cold is six times larger than the Greenland but... the temperature anomaly has the politically incorrect sign so no environmentalist journalistic crook writes about it. Regardless of their gender, the journalists who keep on promoting the climate alarm are mother-sexual-intercourse-havers.

Phys.ORG was balanced enough to at least offer a summary of MIT's Richard Lindzen's talk,

Richard presented quite some arguments why the predictions of the models are untrustworthy, wrong, and why it's preposterous to trust them given the available data. I can't resist one comment about the first remark by a passionate climate panic mujahideen called Voleure under the article:


"He showed a graph that demonstrated that more energy consumption leads to higher literacy rate, lower infant mortality and a lower number of children per woman."

Lindzen should be more careful when throwing stones at the entire scientific community to keep his sponsors cards closer to his chest and not reach beyond the data for his ideology.


Richard doesn't really depend on some inflows of money from the "sponsors" who appreciate his work but an untold secret is that the MIT actually does. Richard is bringing a disproportionately high amount of funding to the institute as important sponsors began to realize how unhinged and politically motivated the rest of the scholars in similar disciplines have become – and the climate alarmists are among the top examples of this deterioration. Those sponsors are often told by the MIT officials "But we also have Richard" and MIT keeps on going.

So the right conclusion is that unless MIT wants to decline, it should more carefully protect its financially key scholars such as Richard Lindzen against garbage of the Voleure type.

Xanthippa (via Tom Nelson) has found a syllabus of Michael Mann's course at Penn State University. Together with Tom, I must say "Wow". Just "Wow".

The first detail that will make you breathless is the name of the course: "Gaia – the Earth System". It sounds exactly like a parody – someone trying to humiliate Mann and similar folks – but the syllabus is real. It's enough to see that the crook can do literally anything at PSU. But that's just the beginning.

Two classes taught by the notorious researcher who just hired a Big Tobacco lawyer to protect himself against some true statements in the media (you can't make it up) were dedicated to watching of Al Gore's movie, An Inconvenient Truth. It's hyenous to brainwash schoolkids at the basic school by this movie but at least, the intellectual level of this movie shot by a politician who doesn't have the slightest idea about science is appropriate for basic schools. But a college? Moreover, these are not generic college kids; they're potential future climate scientists. Are climate scientists really learning from Al Gore these days? Michael Mann has also forced the students to buy his and Kump's idiotic book about "dire predictions".

The intellectual atmosphere at that college must be absolutely shocking if such things are considered tolerable. And this Gore-level insanity must be added to PSU's being a hotbed of child abuse and even loop quantum gravity.
Luboš Motl v 4:44 PM
Share