Comparisons of the Higgs boson and global warming

Bob Ryan, a concerned weatherman with a weather blog, did something we've done many times: he compared particle physics and the climate science.


Global Warming and the Higgs Boson


He thinks that the climate hysteria is analogous to the Higgs boson because
Now, you may be poor, ugly, ill, but you must still be grateful to Mother Nature that She didn't equip you with a skull overfilled with feces such as the skull of Mr Ryan. Holy cow, what an incredible idiot.

That's called the weather and it has behaved equally chaotically for billions of years. In the jargon of particle physics, it's exactly the background noise. So Mr Ryan hasn't found any "signal" or "discovery" analogous to the Higgs boson. He has only mentioned random weather data, noise, background, something that no intelligent person will ever find curious. The whole climate hysteria is about walking on the street, collecting random feces, eating them, and loudly smacking one's lips.

The Higgs boson was discovered as a signal that deviates from the background noise and one may calculate that the probability that the data from the ATLAS detector would emulate a new particle by noise even if the new particle were not there is lower than 1 part in a million. The CMS detector has made the same observation with totally independent data – independent proton-proton collisions – and it has reached a certainty that surpasses 1 part in a million, too. In combination, the ATLAS+CMS certainty that this is not noise exceeds 1 part in a trillion. For people like Mr Ryan, one trillion is 1,000,000,000,000.

You see that the certainty that the observed effects are not due to noise created by the well-known particles was really 99.9999999999% on July 4th: there are twelve digits "nine" in the figure. That's the normal certainty particle physicists reach when they are declaring a discovery. In comparison, climate alarmist crooks are satisfied with 90% and sometimes even less than 90%. Moreover, this "90% confidence level" usually doesn't incorporate the look-elsewhere effect – because these "certain conclusions" are often made out of cherry-picked data – so the actual "certainty" that the climate hysterics consider an appropriate justification for their loud delusions is something like 30 percent or less. We know with certainty that almost everything these climate alarmists ever say about the future (and usually about the past and present as well) is garbage.

The climate alarmists may offer lots of models and data but none of them ever correctly predicts the behavior of the climate for longer periods of time than two months. On the other hand, particle physicists use theories that perfectly match the observations. The experimenters are producing hundreds of diverse papers and each of them confirms nontrivial quantitative predictions made by the theories in particle physics. Let me emphasize that there are two ways to obtain each of these results – from theory or from the experiment – and they just match. Suggestions that the situations in particle physics and climate science are analogous are totally preposterous.

The Higgs bump may look modest at an individual graph but it is not really modest. This is Phil Gibbs' current global combination chart. 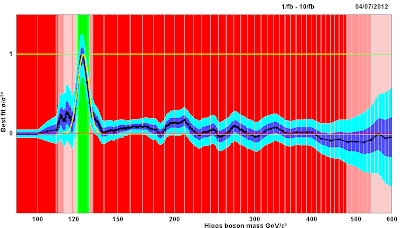 The black line, surrounded by the blue strips (error margins), encodes the measured data. Our knowledge about the existence of the Higgs boson is equivalent to the statement that the black line deviates away from the red horizontal line (no Higgs boson) closer to the green horizontal line (Higgs boson exists) for one narrow interval of masses. Now, the homework exercise for you is: do you see a bump in the chart above? Is the bump – the excursion from the red line to the green line – explainable by noise whose typical size is given by the thickness of the dark blue strip?

It's just a question for you. A reader with IQ above 50 will be able to answer this question. The overall significance is 7 sigma which corresponds to less than 1 part in a trillion risk that the observation is due to noise. Now, the bump near 126 GeV may be metaphorically classified as a man-made or Peter-Higgs-made object, if you will, and this is the evidence that this man-made object exists. Show me an analogous graph that exposes some man-made climate change that similarly clearly deviates from the background – from noise. You won't find it simply because no significant man-made effect on the climate exists.

The number of breathtakingly stupid mental defects squeezed into Mr Ryan's article is just astronomical. He confuses real measured data (by the LHC) and verified predictions of theories with unrestricted pseudoscientific speculations by the world's lowest-quality would-be researchers (speculations about the future temperature change); he confuses light bulbs seen from the satellites with temperature; he thinks that the elite status of a scientific discipline may be reduced by placing words such as discovery into quotation marks and by using childish jargon such as "footprints"; he confuses proper science such as particle physics with pseudoscience such as superstitions about climate change in general.

And moreover, the pseudoscience and shit marches out victoriously after these idiotic comparisons! I just can't stand pompous idiots of this caliber. If here were an honest idiot, we could discuss how to help him, how to put him down so that it doesn't hurt much. But pompous idiots is something I just cannot stand.