The London Olympic Games only start on Friday but Reuters has already handed out the most important medals:

Czechia has Europe's largest amount of alcohol drunk by an average person, 16.6 liters per capita and per year, the World Health Organization proudly reported. When I try to think about it, it's somewhat sick especially if the average includes children (I am not sure whether it does).

Yes, it is true that while I was in Massachusetts, it was normal to go to a law school canteen and expect folks to buy no beer for lunch. The beer is a healthy multi-compound for many reasons. But what my compatriots are doing may be too much of a good thing.


I think that my personal average consumption doesn't go too much above 0.5 liters of beer a day. Sometimes I add a wine or a rum but it's rare and sometimes I miss my daily beer. That's 180 liters of beer per year. Let's say it's the equivalent of 200 liters per beer when the other beverages are included. Multiply it by 4%, the alcohol content (because I usually don't drink the strongest beers), and you get only 8 liters per year.

Now, if the average person has 16.6 liters and if there are inevitably many people who don't drink (or who almost don't drink), the people who do drink must have quite some consumption! ;-)

Needless to say, my hometown is the global epicenter of this activity. A century ago, we would already have four major breweries in town, with complicated names describing the form of ownership. Their products would soon or later become known as Urquell, Gambrinus, Světovar, and Prior, respectively. Prior stopped production already during the first capitalist republic. 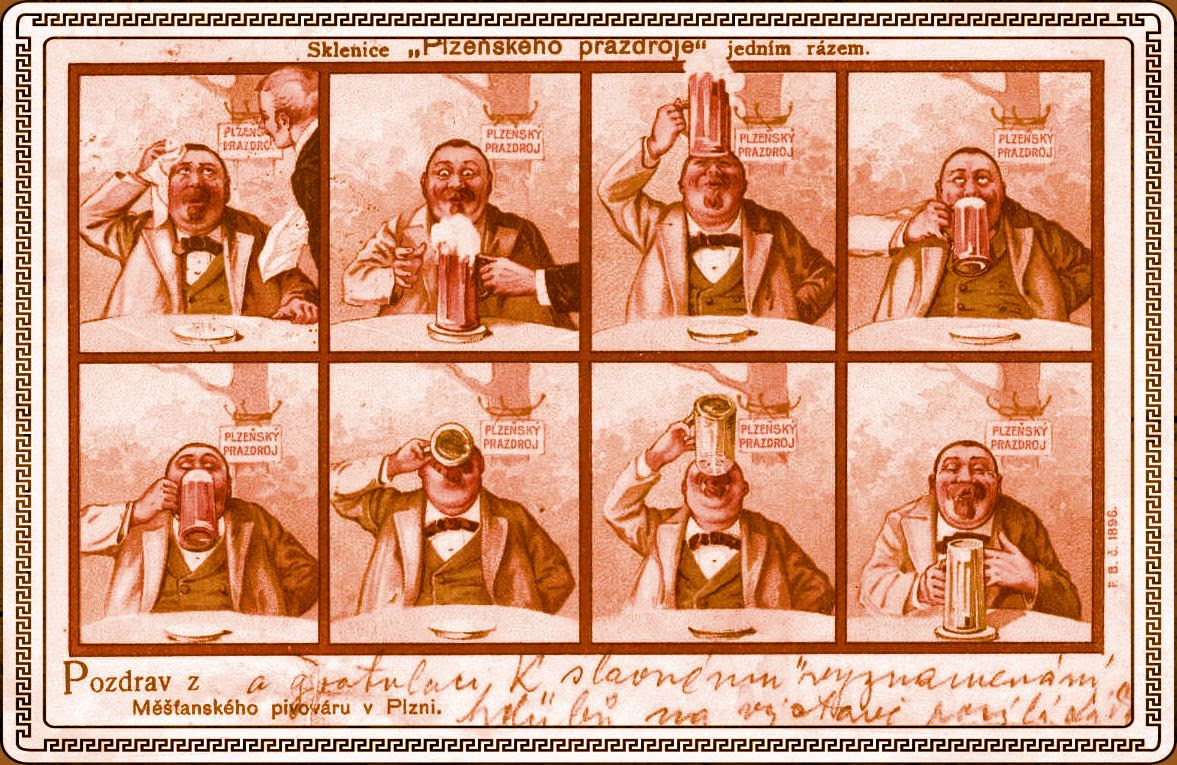 An instruction manual from around 1900 explained how to efficiently drink Pilsner Urquell.

But as I told you in April, it's not just beer that heavily flows out of Pilsen. It's also stronger beverages such as Fernet and the Domestic Rum that another factory in Pilsen, also a kilometer from my home, is famous for. You can't be surprised that with this inflow of \(CH_3 CH_2 OH\) into our bodies, we're sometimes doing silly things – although arguably less silly things than the members of the nations with a strict discipline.

For example, artist David Černý – the author of Entropa, a swimming dead Saddam, and dozens of other similar fancy works – has constructed his least controversial piece of art yet. It is a mascot of the London Olympic Games, a groaning double decker who is doing push-ups. ;-)

The sculpture is already a great attraction at the Czech house.

I do think that alcohol is killing neural cells. But it may sometimes help to make you smarter by natural selection – because the least viable neural cells may be the first ones to go. :-) But alcohol also makes one friendlier and his or her view of the world smoother, more fuzzy, and therefore emphasizing the big-picture patterns.
Luboš Motl v 4:56 PM
Share