Generation X not concerned about AGW

People come in different shapes and ages. Concerning the latter quantity, they may be categorized into
As you can see, if you want a realistic plan to preserve the civilization, you have to rely on Generation X. Lots of media including Phys.ORG promoted the research by Jon Miller of Michigan, The Generation X Report. In its newest edition, it was pointed out and backed by various polls etc. that our generation is thankfully unconcerned about the global warming fearmongering and it is getting increasingly unconcerned.

Generation X is often linked to hip hop, MTV, and other things. It's interesting to see how these stereotypes totally change if you look at slightly different countries such as my homeland, Czechoslovakia.

In Czechoslovakia, the people born in the 1970s or so – including your humble correspondent – are referred to as Husák's Children, to praise the 1968-1989 post-Soviet-occupation Slovak president of communist Czechoslovakia (see the picture we would have in every classroom when we were schoolkids) who helped the baby boom by some policies in the 1970s, too.

Needless to say, Husák's children are unconcerned about the global warming doctrine, too. An advantage of Czechia is that other generations manage to keep their cool, too. ;-) It is interesting to think about whether or not Generation X and Husák's Children have the same identity. Well, while they pretty nicely overlap, they're really people of different backgrounds although the "Westerners" such as yourself probably overstate how large the difference is.

The song "1970" by the band named Chinaski embedded above refers to Husák's children, too. It contains the following verse (about 5 times near the end):


Time gallops, time flies, it's hard to bring the past years back, and so even Husák's children have come to Christ years.

The Wikipedia article admits that Husák's Children began to overtake the society, especially the commercial sector, and the dominant marketing considers our Generation X to be the primary benchmark.

So while 20 years ago and maybe even 10 years ago, almost everyone in the generation was kind of excited by many Western things that were missing here during communism – but be sure that not everything was missing: we have watched lots of things from Western TVs you wouldn't believe that we could know! – things began to change at some moment.

A few years ago, it became possible to observe the retro-invasion of commercials that build on the nostalgia from Husák's Children's childhood, old cool Czechoslovak cartoons, and similar stuff.

Czechia's market avoids all kinds of uniformities. For example, our domestic Seznam.CZ search engines probably remains stronger than Google. But you could continue with other sectors and seemingly dominant Western brands. Take Coca-Cola. During communism, we would drink a lemonade called "kofola". It looks similar but it has actually a significantly different taste than Coke or Pepsi. It may still have been an attempt to imitate Coke that just didn't get close at all. ;-) I may be closer to those who think that relatively to the Coke or Pepsi, kofola sucks. But the economically strengthening Husák's Children make an impact. So "kofola" could use lots of themes deliberately resembling the socialism of the 1980s and it remained competitive with CocaCola. In Slovakia, "kofola" actually beats Coke!

The article above also mentions some of the other "unique grocery products" we remember. You know, in the 1980s, we in Czechoslovakia would have one chewing gum called "Pedro" with a boy with a Mexican hat, approximately one ice lolly called "Míša", and so on. So all these wonderful "brands" got a new opportunity to sell millions of products.

Hi Andrew, may I soak up? – Yup – When you love her, there is nothing to solve. The 1980s socialist "cheap" image of this "kofola" commercial is totally deliberate, I think.

Comments about their uniqueness are vastly exaggerated, of course. As a kid whose uncles were living in West Germany and Australia, respectively, I was pretty much familiar with many classes of standard products. In fact, all children rather often went to "Tuzex", a shop where you could buy standard imported Western products for "bons" (convertible versions of the Czechoslovak crown that was officially equivalent to CSK 1 but you could easily buy it for CSK 5 on the black market). So I've had lots of Donald chewing gums and hundreds of other things, too. Moreover, aside from many Western programs that were freely aired on Czechoslovak TV, we in Pilsen could also catch three West German TV channels, ARD, ZDF, and BR3 (Bavaria). Those were the rather mainstream (and not prosecuted) activities. As a dissident kid, I would also listen to Radio Free Europe etc. which wasn't too common.

Let me mention an anniversary. Exactly 20 years ago, in mid July 1992, it was decided that Czechoslovakia would split. After the first few democratic years that Czechoslovakia also spent with the hyphen war, the results of elections in Czechia and Slovakia were very different. Conservative Klaus won in Czechia; left-wing populist Mečiar won in Slovakia.

Klaus wanted a tighter federation or two independent states. Mečiar wanted to loosen the federation and create a confederation and many forces in Slovakia were much more hostile towards Czechia than Mečiar. Once the new Slovak Parliament codified some new declaration of independence, they just agreed to surgically separate Czechoslovakia into two pieces and become the most important men in the new countries (Mečiar would become a notorious authoritarian leader, I would say). It has worked smoothly for everyone. 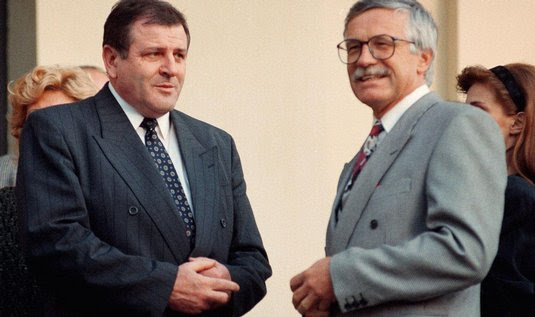 It just happens that Mečiar, now a chairman of an irrelevant Slovak party, celebrates his 70th birthday these days. He had to be exactly 50 when the Velvet Divorce was being decided – approximately the picture of Mečiar and Klaus above. Klaus just sent a letter to Mečiar who is 70. On one hand, it's nice that Klaus hasn't forgotten about his former partner even though he has become irrelevant. On the other hand, my antipathies towards Mečiar are probably strong enough so that I am slightly disgusted by the letter. ;-) In the letter, Klaus describes Mečiar as a great Slovak patriot able to make a compromise, someone whose words may be trusted, and so forth. Quite a good rating! :-)

Needless to say, I don't think that what gave the velvet to our Velvet Divorce was Mečiar. Mečiar was quite a typical populist leader of a separatist nation, the same kind of a leader who have led many other nations to conflicts. What was different about us was Klaus, of course, with his pragmatism and the very simple realization that the divorce is actually good for us as well because we will get rid both of the constant Slovak whining as well the financial transfers to Slovakia that have brought the formerly underdeveloped region of Great Hungary to nearly the Czech level. When both parts really want the divorce, it may work much more peacefully; that's really the main difference between the case of Czechoslovakia and the examples from Yugoslavia, the Soviet Union, and others.

A band duet by a Czech band and a Slovak band, Chinaski and Noname, celebrating the Velvet Divorce and the subsequent good relations between the nations.

Klaus was smart enough to realize that it could have been done and it was actually a good enough solution to do it, relatively to others, so it was done. Many of us were brainwashed by the memes about the inevitability of Czechoslovakia, and so on. As recently as in Spring 1992, I was ready to believe that the separation would mean a war, a catastrophe, or many other things. Today, we may irreversibly say that all this propaganda was rubbish.

Needless to say, the idea to protect the unity of Czechoslovakia at any cost was much stronger in Czechia. If there had been a referendum, it would almost surely end up "against the dissolution" in Czechia (and the Slovak result could go both ways) which would be awkward and would add many long years of hassle. That's why it was good that we had folks who managed to break out of the Havel-sponsored group think – aside from Klaus, I would probably mention mathematician (set theorist) Prof Petr Vopěnka, an ex-minister of education (whose seminars I had attended in Prague's Lesser Town Square), who may have been the first top-tier Czech politician actively promoting the divorce. While these folks were "mavericks", their viewpoint ultimately won and I would even argue that an overwhelming majority of the folks realize that they were pushing our country/countries in the right direction.

It's amusing, paradoxical, but fair that twenty years after the Velvet Divorce, it is Czechia, and not Slovakia, that is much more cautious about the preservation of its national identity and sovereignty. Our successful efforts to avoid the eurozone – that has already swallowed Slovakia – are just the tip of an iceberg of differences.
Luboš Motl v 5:50 PM
Share