Have we observed the Higgs imposter?

Dozens of outlets including The Daily Mail were attracted by an interesting paper with a catchy title,


Have We Observed the Higgs (Imposter)?

by Ian Low, Joseph Lykken, and Gabe Shaughnessy. Having had the office next to Ian for quite some time, I know him rather well. ;-) 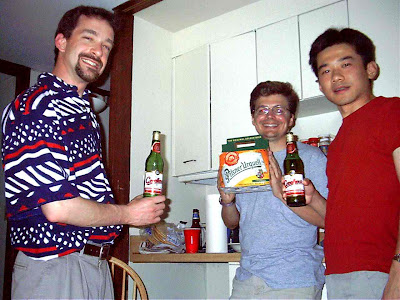 A decade ago, Ian Low Imposter (right) was a component in a triplet (with Matt Headrick and their secretary) that drinks Pilsner Urquell of my hometown (yes, I had bought it) and a Pilsner Urquell Imposter called Czechvar (because crazy U.S. judges don't allow the intermediate, softcore imposter beer to be sold in the U.S. under the original name Budvar in Czech or Budweiser in German that has been locally hijacked by a hardcore Budweiser Imposter called Anheuser-Busch).

In fact, the title and main message was so attractive that days after I had seen the preprint, I was alerted to this paper even by Fred Singer, one of the world's most famous climate skeptics.


I don't plan to discuss the technical content of this paper in too much detail but it's rather original – but much less "contrarian" than the journalists and probably even Fred Singer think.

They eliminate some possibilities what the new particle could be but they still defend the viability of a very unusual culprit. The normal Higgs boson in the Standard Model and its "straightforward enough" extensions is a physical polarization that is left from a doublet \({\bf 2}\) of the electroweak \(SU(2)\) symmetry. The remaining 3 real components of this complex doublet are eaten by the W-boson fields and the Z-boson field in their quest to become massive. 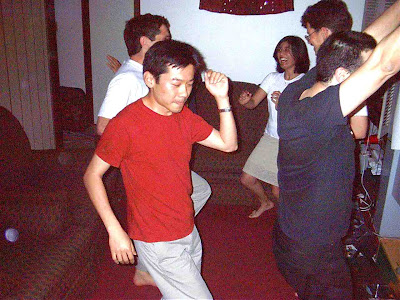 Ian Low Imposter is dancing. The bottom part of the imposter on the right belongs to Marcos Mariño; the imposter behind Ian Low is Andrew Strominger; also seen are Michael Gutperle and Ruth Britto. To protect the privacy of Ian Low and his imposters, I will stop posting extra photos. You could also learn that even Ian Low was high which would harm the logical consistency of this blog. :-)

However, using constructions involving the custodial \(SU(2)\) symmetry and similar decadent pseudo-symmetries that phenomenologists such as these three like, they argue that the new particle could very well be a part of the Higgs triplet (which is also a quintuplet of the custodial symmetry) rather than the usual Higgs doublet. That's extremely unusual for most trained particle physicists. On the other hand, it's still a "Higgs triplet", i.e. a Higgs boson coming from a Higgs field that breaks the symmetry via the Higgs mechanism.

So from the most general qualitative perspective, it's still the same thing and Higgs and Englert and perhaps others would deserve a Nobel prize for this particle even if it were a part of the triplet. (To make their construction look more radical than it is, Low and others try to call the imposter differently even though it is a Higgs triplet and it still has the same name "Higgs" in it.) The construction would be qualitatively different from the usual Standard Model but as far as I can say, it's rather plausible. It's one of the possible avenues how the Higgs sector could be extended relatively to the Standard Model. All of these avenues predict that new Higgs-like particles should be discovered. We're not guaranteed that they will. I still think that the two doublets, i.e. five faces of the God particle, is the most motivated conceivable extension of the Higgs sector. That's because supersymmetry isn't an ad hoc extension. It's a natural symmetry, one justified by string theory, coupling unification, dark matter, and the hierarchy problem, among other things.

I am not sure whether the triplet is really compatible or incompatible with string theory. It's surely unusual in the phenomenological literature if it exists at all. But it may be absent only because people were trained to think about electroweak doublets only; absence due to group think and unjustified habits. I am not able to prove a no-go theorem for Higgs triplets like that. But maybe someone can...

By the way, by a complete coincidence, "Cabibbo What" at a physics blog asked its readers today what is the strange triplet "L-N-L" on the picture below: 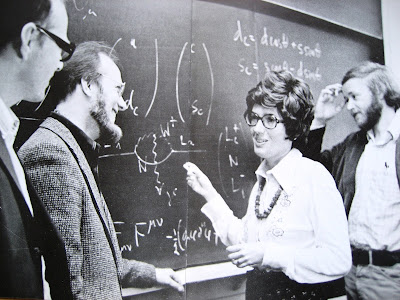 No reader over there knew so let me tell you: it was a lepton triplet – charged lepton, neutrino, oppositely charged lepton. These days, we no longer arrange leptons or Higgses into electroweak triplets as we prefer doublets for both. Homework exercise for you: Would there be anything wrong with a model with a single neutrino and two lepton species that is organized as a triplet like on the picture from the 1970s rather than a doublet?
Luboš Motl v 9:06 PM
Share