The Global Warming Policy Foundation has pointed out seemingly sensational news reports that are however confined to New Zealand (you should ask why), to media outlets such as The New Zealand Herald. 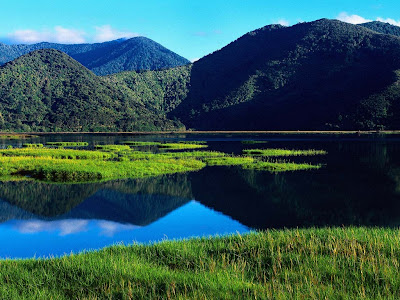 A landscape in New Zealand. You should rotate your LCD panel by 180 degrees to have a better idea about the orientation of it in space. ;-)

Ms Mikaloff-Fletcher is an expert in carbon sinks. Together with others, she studied the changes of the uptake of carbon dioxide in recent 20 years.


You should read the original sources; I will just mention a few figures and some added value, an interpretation. It turned out that if you compare the present and the era 20 years ago, the amount of carbon absorbed by the land biosphere every year has jumped by 1 billion tons per year – that's about 3 billion tons of CO2 or 10 percent of the annual man-made emissions. And that's just the increase.

The newspaper articles generously argue that it's stunning, complete surprise, and so on. Most of them don't forget to reprint the mandatory phrase designed for similar situations that "the findings don't mean that people should stop being unhinged hysterical IPCC-style AGW loons".

I find it obvious that the absolute amount of carbon absorbed by the atmosphere inevitably increases if the CO2 concentration does. If a substance is easier to get, then the consumers will consume more of it. Is that shocking? It's true for CO2 much like it's true for water, marijuana, or anything else.

These days, the average CO2 concentration is about 393 ppm. Twenty years ago, it could have been 357 ppm or so. That means an increase by 10 percent. However, it's more interesting to compare the "excess CO2" in the atmosphere. The CO2 concentration that is in equilibrium with the current temperatures (and believe me, it makes no difference whether you mean "before global warming" or "after global warming" because this difference in tenths of a degree is negligible relatively to the difference between ice ages and interglacials which is almost a dozen of degrees) is about 280 ppm. So twenty years ago, it was 77 ppm above the equilibrium value; now it is 113 ppm above the equilibrium value. This "excess CO2" therefore rose by 47% in the recent 20 years.

This fast growth shouldn't shock you. In two recent centuries, CO2 emissions have been growing exponentially, being multiplied by \(e\sim 2.718\) every 57 years or so and the "excess CO2 in the atmosphere" was exponentially growing with approximately the same \(e\)-folding time.

If we compute the "overall annual trade balance" of the land biosphere's uptake of CO2, the sinks minus the sources, it's reasonable to estimate that this difference will be proportional to the excess CO2 (although some nonlinearities may exist). So the amount of CO2 that the land biosphere is absorbing (sinks minus sources) must have increased by dozens of percent in recent 20 years.

This fact may also be studied by looking at the "consumers". Despite the discussions about deforestation that may still be heard, the planet has greened substantially in the recent 20 years. Secondary tropical forests and many kinds of green areas in the moderate zone cannot be overlooked.

A week ago, I carefully studied about 2,000 historical photographs (and drawings) of my hometown of Pilsen (especially those on George Krejci's website) most of which were about 110 years old but there were others, too. I was impressed by the aristocratic image of Pilsen as a royal city of the Austrian-Hungarian Empire. It looked beautiful, clean, almost all citizens looked wealthy.

That romantic picture apparently survived through the capitalist Czechoslovakia in between the wars and mostly through the Third Reich protectorate era, too. But what the communists have done to my town was rather devastating. The city was changed into a dirty industrial chimney with stupid communist slogans replacing the work of top artists. Old buildings were left to deteriorate (and some of the cool ones were demolished) while the new ones looked ugly and egalitarian. The inhabitants were changed from being the peers of aristocracy to a de facto uniform working class. Despite lots of improvements since 1989, it was a transformation that hasn't been undone in the 20+ years after the fall of communism and we may never undo it, at least not in a foreseeable future.

But I should return to the main topic. I was kind of amazed to see that half a century ago or even one century ago, Pilsen was in many respects more industrially sophisticated and filled with facilities to improve production and people's lives. Electric streetcars were going through many streets that are tramless these days. The number of tracks on the main square was doubled. And one could find factories and breweries at many places that are actually green these days. There were four major breweries in Pilsen at the end of the 19th century.

All these things are somewhat amazing to see if you realize that the population of Pilsen was something like 5 times smaller than it is today (although a part of it is just due to the old census' omission of various villages around Pilsen that have been reclassified as suburbs).

I have discussed the maths of the CO2 uptake many times and it's a brutally misunderstood topic by most people, including most people in the IPCC. Our CO2 emissions these days, if they were just being added to the atmosphere, would increase the CO2 concentration by 4 ppm per year or so (i.e. by 1% a year, using the current concentration). The actual increase is something like 1.9 ppm (0.5%) so 2.1 ppm is absorbed by the oceans and the biosphere. This amount of 2.1 ppm is approximately proportional to the "excess CO2 in the atmosphere" I discussed at the beginning. Whether a tree wants to grow "more than it usually does" depends on the immediate concentration of CO2 and other nutrients and essential ingredients only; it obviously doesn't depend on the change of these quantities in the last year or some other accounting that would try to monitor the human activity. Trees don't care (and can't even feel or find out) where the CO2 they breathe in came from, whether it was emitted in the last tax year or not, and whether it was emitted by humans (and whether someone stole CO2 indulgences for the CO2 from someone else).

After ice ages when the biosphere was scarce and frail, the reaction of the plants was probably slower and it took several centuries to adjust to the equilibrium value. It had to be slower, as the 800-year average lag of the CO2 concentration that was changing after the temperature changed indicates. But these days, the planet is full of potential CO2 consumers that are ready to strengthen and reproduce and increase their uptake so I am confident that in 100 years after CO2 emissions stop, almost all the excess CO2 will be reabsorbed.

Because of the partly deliberate confusion spread in the media and elsewhere, it's important to point out that the concentration of CO2 is important for the rate at which trees, crops, and other plants grow. But it is not important for the temperature.