Someone at the Physics Stack Exchange asked about the recent status of the \(130\GeV\) line located in the Fermi gamma-ray data by Christoph Weniger in April 2012 (a confirmation).

It's one of the most exciting and potentially emerging signals of new physics – signals of dark matter. I answered as follows.


also claims that the signal is there – not only in the center of the Milky Way but also in other galactic clusters, at the same 130 GeV energy. This 3+ sigma evidence from clusters is arguably very independent. All these hints and several additional papers of the sort look very intriguing.

There are negative news, too. Fermi hasn't confirmed the "discovery status" of the line yet. Puzzles appear in detailed theoretical investigations, too. Cohen at al.


claim that they have excluded neutralino – the most widely believed identity of a WIMP – as the source because the neutralino would lead to additional traces in the data because of processes involving other Standard Model particles and these traces seem to be absent. The WIMP could be a different particle than the supersymmetric neutralino, of course.

Another paper also disfavors neutralino because it is claimed to require much higher cross sections than predicted by SUSY models:


But one must be careful and realize that the status of the "5 sigma discovery" here isn't analogous to the Higgs because in the case of the Higgs, the "canonical" null hypothesis without the Higgs is well-defined and well-tested. In this case, the \(130\GeV\)-line-free hypothesis is much more murky. There may still exist astrophysical processes that tend to produce rather sharp peaks around \(130\GeV\) even though there are no particle species of this mass. I think and hope it is unlikely but it hasn't really been excluded.

Everyone who studies these things in detail may want to look at the list (or contents) of all papers referring to Weniger's original observation – it's currently 33 papers (update on Friday: 36):

Yesterday, I also wrote in a comment thread that I find it puzzling when there are many independent hints and each of them seems to be around 3 sigma. Given the a priori possible significance level or relative strength of the signal between \(10^{-10}\) and \(10^{+10}\), it seems surprising when all the significance levels of relevant observations manage to hit the narrow 3-5 sigma window.

However, when I am thinking about the same signal seen in the different galaxy clusters, I am more impressed by it than I was two days ago. The energy \(130\GeV\) is very high. If it happened to be a peak of some astrophysical processes, they would probably have to be processes that depend on some typical star size, star density, and other things, and it seems likely that the peak which depends on these astrophysical parameters would be shifted to different energies in different galaxy clusters.

So it seems increasingly likely that some new physics is associated with \(130\GeV\) photons. If this is where the evidence is going, we must determine what the particle is made of.

Do you remember that we used to call the satellite "GLAST" and then "Fermi, formerly GLAST"? The satellite has brought us so many wonderful insights that we can't even remember when we exactly switched to "Fermi" and internalized this new name. But it's here.

Meanwhile, in the dark matter direct search experiments, a new powerful explosion was detonated by the dark-matter-is-not-seen axis. XENON100 has published its new exclusion limits. 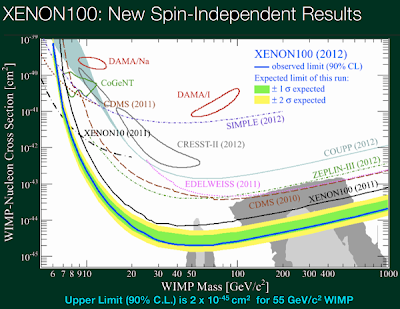 All combinations of (mass, cross section with the nucleon) above the blue line at the bottom – the line inside the green-yellow Brazil band – are said to be forbidden by XENON100's data. This of course strengthens the conflict with the dark-matter-is-seen experiments such as DAMA, CoGeNT, CRESST, and perhaps others that claim that the dark matter apparently does show up and it lives at various islands in the XENON100-forbidden sea.

It's increasingly unclear which side is right. The conflict is getting sharper. The methodologies of all the experiments are inequivalent so it is in principle conceivable that the dark matter particle is behaving in very different ways in various experiments and all of them are compatible with each other. However, it seems more likely that some of the experiments are doing something wrong.

The tension exists not just in between the different dark matter direct search experiments. There is a tension with the 130 GeV Fermi line, too. While XENON100's exclusion curve is just starting to "bite" into the region predicted by various models of a neutralino, these models (and the XENON100-allowed cross sections) seem to predict way too low cross sections to explain the rather strong Fermi line located by Weniger.

You may decide that the right reaction is to dismiss XENON100: there are too many hints that dark matter exists. But that won't really reduce the discrepancies much because the direct dark-matter-is-seen experiments indicate the dark matter particle mass close to \(10\GeV\) which is much lower than Weniger's \(130\GeV\). So something could be completely wrong about our models or the experiments – and things could be much more complex or very different from what the experimenters think.


BTW I spent some time reading an impressive proof of the formula for all the tree-level amplitudes in \(\NNN=8\) SUGRA. Equipped with this proof, it seems increasingly clear to me that this is just a version of the sphere-surface tree-level stringy scattering amplitude that may be extracted from type II string theory with some way to rewrite the degrees of freedom to the twistor variables, ignore some "compactified ones", and using some analytical continuations so that the path integrals get reduced to residues. I would love to see the reduction of the formula to tree-level string theory in some more explicit form but even without that, the status of the twistor formulae looks clearer to me – it's string theory with reparameterized world sheet variables.
Luboš Motl v 3:56 PM
Share