According to The New York Times [+pic], the two most memorable aspects of the 2012 Olympic opening ceremony were Ralph Lauren's and the Czech athletes' outfits. (A live NYT blogger has two different winners, the wellies and Danny Boyle's speech.)

Irish Independent, LBSports, UKPA and tons of #wellies tweeters [realtime] have also noticed the wellies and umbrellas which they opened simultaneously. As you can see, the Czech designers have carefully read the warnings in the Daily Mail. 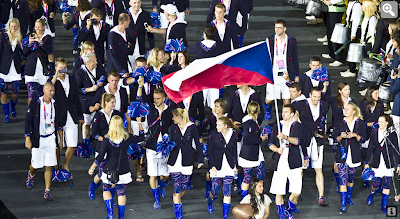 Click to zoom in. See a gallery I with 5 pictures or gallery II with 31 pictures. The march was led by badminton player and cancer survivor Mr Petr Koukal. If the German team had the same shoes, it wouldn't be original because the same shoes have already been preferred by Irma Grese. :-)


While many other athletes across the politically correct world believe that the climate is changing and England is becoming a paradise for orange growers, the Czech athletes – supervised by Czech President Klaus, a climate realist and a passionate athlete – think that the climate hasn't changed and London's weather is as rainy, cloudy, and sucking as it was several centuries ago. 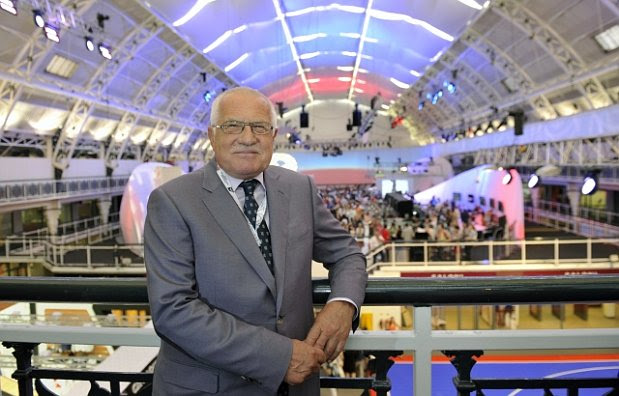 Needless to say, with a shower during the ceremony, the Czech outfit turned out to be a good idea. Don't believe fads and don't be afraid to be the only individual or the only group who has preserved some common sense! And don't forget that the English weather sucks.

Meanwhile, the wellies remain the only Czech success (a gold medal, our Slovak brothers confirm) after much of the first day. Shooter Ms Emmons and tennis player Mr Berdych are among those promising representatives who didn't manage to grab medals.
Luboš Motl v 12:27 PM
Share