Should experimenters bet on their own experiments?

Tommaso Dorigo of CMS indirectly tells us that his ex-wife he recently divorced has a pretty good lawyer:

So one of the things he urgently needs is $1,200. He would like to declare victory in two or four of his 2006 bets. And no, they're not Higgs bets.


He describes the bets as follows:


So, to me this is pay day. If you recall, a full six years ago (September 2006 to be exact) I bet $1,000 with Gordon Watts (an experimentalist in ATLAS, who took the bet for $250) and Jacques Distler (a theorist from Texas university, who covered the remaining $750) that no new physics beyond the SM would be claimed by the ATLAS and CMS experiments upon analyzing 10/fb worth of data.

Dorigo already wants to claim $750+$250 and twice $200 from Tony Smith – yes, that makes $1,200 in total (and he would lose about $1,950 if new physics were found) – for bets that are obviously too early to close. Whether new physics will be found in the first 10/fb worth of data remains to be seen. This is approximately the data that have been recorded by each detector so far but papers with conclusions about this dataset are music of a distant future. 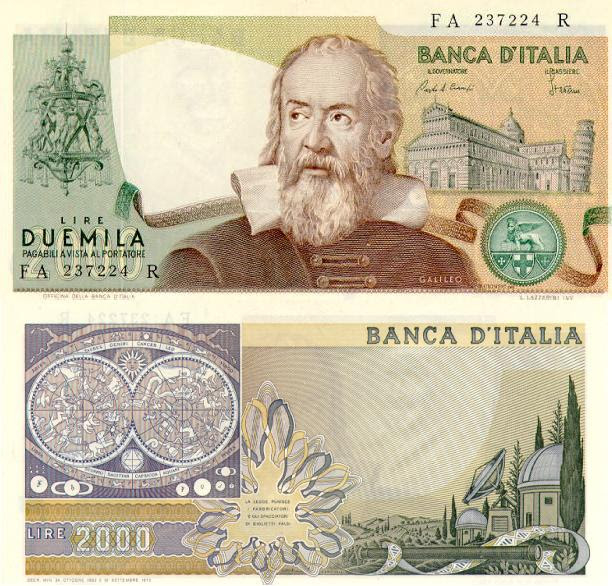 If Italy doesn't make it, Galileo Galilei could finally return to banknotes again.

In fact, not only "many" searches using 10/fb are still waiting to see verdict; most of them are still waiting to be evaluated. Just look at the abstracts of the "full text" of ATLAS conference notes and CMS physics analysis summaries that most of the newest papers only use the 2011 data, i.e. 5/fb at 7 TeV. In fact, many recently published papers only use 2/fb or 1/fb and papers based on just 35/pb from 2010 are still being revealed these days!

The recent CMS paper with tantalizing hints of top partners which may have very well surpassed 3 sigma is another example of a paper that only uses 5/fb from 2011. An analogous paper using both 2011 and 2012 data – that may wait for 2013 to see the light of the world – may easily contain a 5-sigma discovery. It seems clear to me that Dorigo can't possibly claim victory even if he is right before 2013.

At any rate, Tommaso Dorigo is a member of the CMS statistics committee and the information about the fate of more than $3,000 (subtracting the positive and negative profit) has strengthened my previously already rather strong suspicion that the particular paper's conclusion that "we see no excess" is in fact fraudulent and I know the person behind it. Of course, I am eagerly waiting for papers on the same topic that use the 2012 data and/or that are prepared by ATLAS.

Cliff Harvey has expressed doubts whether experimenters should bet on the results of their very own experiments at all. It looks strange but in principle, I would probably not think that it is necessarily unethical. I still think that a good experimenter should be able to do his research independently of any financial pressures, including ones that are of completely personal nature, so he or she should be free to make the same bets as anyone else.

However, I admit that I may still be living outside reality and no such experimenters actually exist. In fact, it's plausible that even amounts that are smaller by an order of magnitude could encourage an average experimenter to change something in his or her paper. Of course, whether this "will" is enough depends on the status of an experimenter in his or her collaboration.

What do you think, is it OK for experimenters to make bets worth thousands of dollars whose resolution depends on the conclusions written by the same experimenters' papers? Or is it a conflict of interests that people should avoid?
Luboš Motl v 3:54 PM
Share