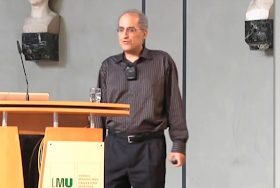 On Saturday, I added a link to the 51-minute public lecture by Edward Witten above (Flash, PDF only): click the screenshot. In the right lower corner, there is a "full screen" button. On the left side from it, there is another button to "embiggenify / mediocrize / elsmolinify Edward Witten". The dimensions of the slides change inversely to those of Witten.


After a nice and somewhat standard and classic introduction to particle physics and rudimentary string theory, questions start at 43:30. All four questions have been asked by trolls with no knowledge of the field and no interest in the field; sorry if I overlooked someone but it's extremely unlikely. ;-)

The first troll asks whether Edward Witten is aware of his responsibility towards science or something like that – because Witten isn't like Newton who calculated numbers (WTF?). I must admit that I was laughing when I saw Witten – a denier of the problem of the existence of Peter Woit and Shmoit-brainwashed jerks and imbeciles – being grilled by idiots in this way. The arrogance of these mental cripples is just hilarious. The organizers were completely unable to stop this particular asshole's monologue for 3 minutes. ;-) (It could have been a high-profile German crank, Herr Alexander Unzicker.) When Witten finally wins the battle to be able to speak again, he recalls some historical examples of theories that have faced skepticism for a long time but they ultimately prevailed.

A question at 47:30 was dedicated by the calculation of the number of generations in string theory from the Euler characteristic. Witten offers a short but completely non-technical answer, mentioning that certain results depend on certain assumptions.

Someone asks at 49:00 whether loop quantum gravity will be seen as a part of string theory. Witten says that first of all, good ideas such as noncommutative geometry and twistors are becoming components of string theory all the time. In the case of loop quantum gravity, however, Witten expects it to stay in the dumping ground of the history of science. A very stupid question about "\(10^{500}\) parameters" (WTF?) follows. Witten doesn't have the time or desire to correct the confusion about parameters etc. so he pretends that by parameters, the visitor meant the number of solutions and he returns to some general facts.

In general, the quality of the question was lousy and it showed that Germans have been brainwashed by pure shit as much as some other groups. I feel relaxed not to be an official part of the institutionalized particle physics. Facing such overwhelming piles of stupid yet arrogant and stinky assholes, I would surely react in a more interactive and explanatory way than Witten and I would probably be lynched for that.

Next year, if I were in charge of those events, I would introduce pre-filtering of the questions after the public talk so that the Q&A period wouldn't become an arena for exhibition of assholes again.

The text below was posted on Friday.

Strings 2012, the annual conference which has been taking place at the LM University in Munich, Bavaria, Germany, is ending today.

To get the access to all the talks, see Speakers, titles, talks. All of the videos will ultimately be posted, too. I have substantial doubts whether there would be a sufficient blogospherical market for my hypothetical review of all the 57 talks. So let me reduce this blog entry to a few short comments on a few talks.

The omitted ones may be much more interesting than the picked ones, of course. And I could have failed to mention the most important things in the selected talks, too.

John Schwarz gave a rather enthusiastic introductory talk about the purpose and state of the field etc. Lara Anderson showed that the heterotic phenomenology is thriving and the young folks in particular know much more about the higher-dimensional geometries than what was known years ago. Hans Peter Nilles gave a more conceptual or more speculative talk on what he calls heterotic supersymmetry – SUSY with some extra phenomenological features.

Sandra Kortner introduced the audience to the results from the LHC from a pure experimenter's perspective. Ignatios Antoniadis reviewed the LHC events from a viewpoint of a string phenomenologist, focusing on some possible ambitious signatures that I consider very unlikely.

Savas Dimopoulous interpreted the task of the LHC as a that of a judge who decides about the next physicists' journey from a grand crossing, multiverse vs naturalness. He believes that this big question is gonna be decided by the end of the 2012 run. While they surely sound exciting, I find such claims excessive. If the LHC finds no new physics by the end of 2012, I will be very far from adopting the multiverse as an established thing. Naturalness is a fuzzy concept – how much natural things have to be? – so such clean conclusions about it aren't possible.

Several talks discussed the correlators in the \(\NNN=4\) gauge theory. And many talks analyzed the applications of string theory and its AdS vacua on things like superconductors, liquids, and other squalid state materials. I decided not to enumerate those great speakers; they included Gary Horowitz and Andreas Karch.

There are talks about twistors. Nima Arkani-Hamed finally presents his permutation-based formalism for the twistor amplitudes. I haven't understood it yet; it seems nontrivial and heavily dependent on all the previous technical developments. What makes my reading harder are the suggestions that this is a totally new picture completely deviating from all the QFT-based and string-based frameworks. I still don't see how this could be true. It's a great stuff but I feel that many technicalities are overinterpreted as conceptual breakthroughs and the lack of the new formalism to explain things like locality and unitarity is presented as a virtue. I don't understand these sentiments, Nima. Locality, unitarity, Lorentz symmetry, and other things may be obscured by a formalism or two but seeing how they arise is always an advantage – knowledge – not a disadvantage.

Edward Witten has resolved some small enough old confusing subtlety in superstring perturbation theory, including an explanation why there aren't perturbative corrections to the gravitino mass. His presentation resembles the way how he writes papers: the final version of the paper with all the equations is monotonically growing as you press "page down" on his PDF file. ;-)

Cumrun Vafa reviewed topological string theory. Andy Strominger gave an update on dS/CFT. I thought he already abandoned it. It may contain some completely new ideas such as Wilson surfaces as observables in the de Sitter space. It will need some time for the evaluation of others. But if it is a completely different thing than the dS/CFT a decade ago, he should also change the brand because I am sure that there are many who share my impression that the dS/CFT brand has been discredited. ;-)

Hermann Nicolai reviewed pretty much all the "non-stringy" approaches to quantum gravity and concluded that they have an infinite amount of ambiguities, a loss of predictivity, and they are much more detached from experimental tests than string theory. For various major reasons that are often (deliberately?) overlooked, this includes loop quantum gravity, spin foams, asymptotic safety, Regge calculus, causal dynamical triangulation, and others. A very sensible talk.

I think it's refreshing that the organizers once decided to include someone (well, one of them) who knows – much like all real quantum gravity experts who have looked into those things – that none of those alternatives really works in the same sense as the sense in which string theory works. In some of the previous years, it would be politically correct to invite some people from those failed directions and say things that no other participant considered correct. This waste of time was abandoned, at least this time.

David Gross wraps up with outlook and visions today. Due to the constrains of causality, the talk hasn't been posted yet. If you were intrigued by something, don't hesitate to share your feelings and knowledge.
Luboš Motl v 9:23 PM
Share