Tevatron: DØ has made a lot of Higgs progress


There was a 90-minute-long webcast at the Tevatron today. This is how their combined searched looked a few months ago: 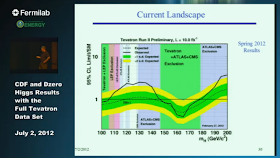 The excesses were over 2 sigma. The peak is fuzzy largely because of the energy uncertainty in events with a W-boson decaying to neutrinos, among other particles.

Especially the DØ collaboration has made some progress in recent months – they worked on the finer details, were improving systematic uncertainties, Monte Carlo etc.


The result is that the statistical significance has been improved. The local excesses are as high as 3.2 sigma; with the look-elsewhere punishment included, the global significance is 2.5 sigma. However, the energy resolution is poor and the strongest excess is near 135 GeV or so. 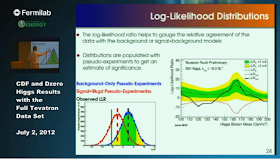 The shape of the curve isn't quite new – its change in recent 2 years was very slow – but only now, the signal got stronger than the Standard Model including the Higgs.

The retired American collider still reports a significant excess of bottom-quark Higgs-like decays for a Higgs mass 125 GeV in particular – even relatively to the Standard Model with the Higgs boson predictions – which would favor a larger tan(beta) in supersymmetric models – something that may be true or untrue independently of supersymmetry. You see that the full black curve in the picture above (a log likelihood ratio distribution) is actually even below the dashed red curve – which indicates a signal stronger than even the Higgsful Standard Model prediction. The LHC doesn't seem to share this observation, however.


COUNTDOWN CLOCKS
The Independhiggs Day Seminar at CERN is 1 day and 16 hours away right now. Are we close to the Higgs discovery? John Ellis – who has 60,000+ citations in particle physics – said the following 4 days ago:
If you're jealous about Ellis' Standard Model Lagrangian T-shirt, you should at least buy the Higgs boson T-shirt from amazon.com – see the icon next to the previous paragraph. :-) And if you think that Ellis can only say those things in English but not in French, then jump to 15:37 once the video gets black and seemingly over at the beginning. :-) My French isn't perfect but around 17:00, the interview becomes characteristically French as the French media babes try to study every thread in Ellis' T-shirt.
Luboš Motl v 4:52 PM
Share