Marc Morano has pointed out the following interesting article in the Guardian:


Energy smart meters are a threat to privacy, says watchdog


By 2019, British citizens are obliged to install new, "smart" devices to measure the energy consumption. The detailed consumption patterns will be evaluated locally and sent to an energy-saving official dedicated to your street in the utility's headquarters. 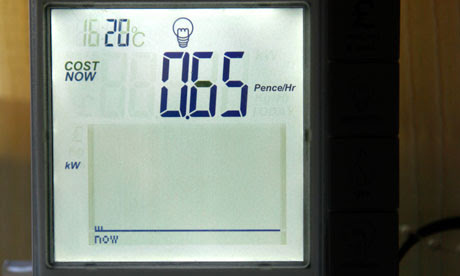 Note that the device allows you the home temperature either at 16 °C or 20 °C.

She or he will tell you whether you should take a shower or a bath and how much energy you save by having sex in the morning rather than evening, in your bedroom or your living room. Based on the graphs from individual light bulbs and other devices in your apartment, she or he will recommend you a new diet and a new partner, too.


The detailed data of each inhabitant of a house will be discussed at the daily meetings of the Green Party. The most outrageous violators will be published in the media. So this is an answer to the question: What if the climate alarm is a big hoax and what if we create a "better world" for nothing? ;-)

More seriously, I am occasionally shocked what kind of policies is still being pursued somewhere. Where did this stuff come from? Who has approved it? We often think that we have already won, the climate alarmists have been shown to be crooks and removed from the political process; it's a matter of time when we arrest some of the most notorious alarmists who have actually been mining money out of this huge scam.

But we also frequently encounter some of their brainchildren that haven't been killed yet. Someone should make a detailed research into all these time bombs that are waiting for us, all these insane policies recommended by unhinged Big Brother environmentalists that have already been initiated and that are waiting somewhere to be realized and which will be realized unless we will be more cautious.

It is no other person's business to be deciding whether you should have a shower or a bath, not to mention more intimate questions. Whether one consumes more energy than the other is just an issue to be considered by the person who is paying for the energy. And be sure that even without smart meters, people generally know that baths are more expensive than showers. (I personally know the consumption of all the electric devices in my apartment.) But unless we want to merge our countries with North Korea, such elementary things can't be outlawed.

The title of this blog entry was meant to be an eye-catcher. However, it is true that if someone may evaluate the detailed graphs of your electricity consumption – and perhaps with some more detailed descriptions – in your apartment, he or she will know a lot about what's happening in it. I do agree with the Germany consumers mentioned in the Guardian article that it's creepy. And there are people out there who are vastly more sensitive about privacy than I am.
Luboš Motl v 8:50 AM
Share