I included a photograph of a sculpture of Havel by a local Pilsner student and sculptor because I consider it a more nontrivial piece of art than the sculpture discussed below but it is not the actual star in this story.

Global warming – which hasn't been seen for 15 years – is nevertheless causing at least 882 horrible as well as not-so-horrible things but Marc Morano has found out that it's doing something really devastating these days.


The heart of the late Czechoslovak and Czech ex-president, playwright, and dissident Václav Havel (1936-2011) is melting under the weight of the catastrophic global warming.

At least that's Richard Tol's interpretation (I hope and guess that a mocking one but you never know when it comes to propositions about AGW!) of the latest catastrophic AGW news story in the Czech (more), Russian (written in English), and Dutch media.

The sculpture in the town of Litomyšl was created by hundreds of volunteers who wanted to immortalize a classic symbol of Havel: the heart was both a part of Havel's signature as well as a part of Havel's Prague Castle. We wanted to export the latter heart to Kabul – after it was considered as an inappropriate component of the gothic (plus a few other styles) castle – but the project was vetoed by Havel himself who figured out that the Afghan savages wouldn't really appreciate it (he used slightly different words). Unlike the tolerant citizens of Prague, the Afghans could figure out that the neon heart is a standard symbol of red light districts. ;-)

Now, the evil oil companies and the climate denier who replaced Havel at the Prague Castle conspired and they're melting Havel's heart. Could you invent something sadder and more touching? 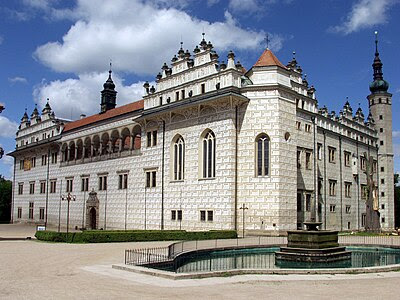 If you care about technical details about the latest victim of global warming, the sculpture of the heart was made out of lots of candles – it's out of wax – and it was placed under the Sun in 30-Celsius-degrees temperatures. But don't get distracted by any of these technicalities: the melted sculpture has nothing to do with the Sun; climate change is caused by evil humans and CO2. If you want to immortalize a sculpture, you may choose any material but you must fight against the CO2 emissions.

The debate is over.

More seriously, the authors are not dumb. They realize things about the melting and the temperature dependence on the irradiation. The heart has been tested to sustain 30 Celsius degrees and because the authors realize that the actual temperature of wax is higher than the surround temperature measured in the shadow, they only recommended to display the sculpture at temperatures up to 18 Celsius degrees. Well, someone clearly didn't care.

Just to be sure, they did notice it was melting and moved it to a basement.
Luboš Motl v 5:22 PM
Share