Fox News and others just promote a new paper in Nature

which claims the discovery of traces of palm trees that apparently lived in the Antarctica 52 million years ago. 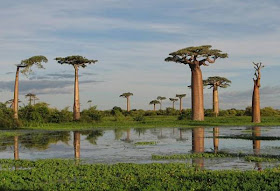 A photograph of the Antarctic beaches that Al Gore and Jasoň Mráz could have taken 52 million years ago.

The trees were apparently close relatives of the tropical Baobab trees (pictured above) that may be found in Madagascar these days.


The most convincing smoking guns supporting their claims are fossil pollen and spores apparently coming from the Antarctic coasts.

The authors think about various parameters and decide that even winters in the Antarctica had to be very mild – warmer than +10 °C – and frost-free. This apparent fact provides us with a "new constraint for the validation of the climate models", the 17 authors (thanks, Willie) claim at the end of the abstract. In other words, the finding, if true, proves that all existing climate models are complete rubbish because they obviously don't allow the continental temperatures to naturally change by this much.

If you visit the Antarctica these days, in the winter (don't forget it's the Southern Hemisphere – I don't want to use the term "other hemisphere" because I respect the Aussie, Kiwi, South African, and Latin American TRF readers), the lowest temperatures in the bulk of the cold continent reach something between –80 °C and -90 °C. The lowest ever recorded temperature was over there, of course, and it was –89.2 °C. Yes, it is at least 100 °C cooler than the temperatures you find most comfortable.

Comments about the role of CO2 are totally preposterous because the concentration at that time wasn't really too much above 500 ppm, the long-term average for the epoch (the Paleogene) which is just 20 percent above the current one. Even with the most insanely high estimates of the climate sensitivity, you could argue that the temperature could have been one doubling i.e. 3-5 °C higher than today. You still need to explain 95 °C or 100 °C of warming.

Needless to say, the presence of the palm trees has entirely different reasons. One of them – completely neglected by the writers – is the continental drift. 50 million years isn't too much but it isn't quite negligible, either. The picture above shows you the likely positions and shapes of the continents 70 million years ago. You see that there's some potential for the Antarctic coasts to be much closer to the current location of Madagascar than they are today.

The hypothesis that the warm Antarctica was man-made requires us to believe that Tubab [=White] Women were living and driving cars next to the Baobab [=Fruit Of Many Seeds] trees.

However, what's much more important – and Richard Lindzen often emphasizes this degree of freedom – is that various circulations were different and led to a much lower polar-equatorial temperature difference i.e. much smaller gradients. At that time, the poles were just not as different from the equator as they are today. Such "regional" changes of the Earth's climate are obviously much more important than a few degrees of "global warming" because they're able to change the regional climate by something that is closer to 100 Celsius degrees than to one degree.

At any rate, there are many questions that deserve an ever more reliable and accurate answer but if the suggestions by the paper in Nature are right, there are several lessons we may learn, including
You may say that it is an extremely long time ago when the palm trees lived there but it is not a long time from a geological viewpoint: the Earth was just 1% younger than it is today. Mammals were already around and some of them began to evolve into primates, a category that humans proudly share with apes and monkeys.

People shouldn't forget about this research next time when the fearmongers try to convince them that they should be afraid of every Celsius degree of temperature change.

This blog entry is on a light topic, namely biology and climatology, so another song by the Yellow Sisters 2012: the ants are moving behind the next tree. ;-) The Yellow Sisters also know how to rap, see e.g. the video clip on Lactation Psychosis by young director Ms Tereza Nvotová (who made a documentary on me, too).
Luboš Motl v 7:30 PM
Share