Curiosity rover and excitement at NASA

I just spent two hours by watching NASA TV that covered the landing of the Curiosity Rover, the cleverest part of the Mars Science Laboratory (MSL), on Mars.

The landing maneuvers (those "7 minutes of terror": diagram) were unbelievably sophisticated (more than any other previous landing procedure); watch the video above (it looks like from a science-fiction movie, doesn't it?).

At some moment, the NASA folks in blue shirts became pretty much sure that things were fine; you could see their certainty on their faces. Of course, we didn't know whether their optimism was justified. But they're probably experts – and the probability seems to be supported by pretty impressive empirical data at this point – such that each of them really knew what was going on at each step and what the remaining risks were, too.


But nothing could replace the excitement we could see and share when the precise final reports about successful achievements of the system were communicated to the NASA headquarters; and especially the moment of the final landing. The ecstasy among the people was amazing. It had to be a strange feeling to know that nothing could be controlled in "real time". It took about 14 minutes (current distance here) for the electromagnetic radiation to get from Mars to Earth at that moment; 28 minutes for a round trip. So light (or any other influence allowed in Nature, because of special relativity) simply wasn't fast enough to influence those "7 minutes of terror".

Various folks including NASA administrator Charles Bolden and Obama's science adviser John Holdren gave some enthusiastic speeches. I was ready to instantly press "close the window" in the case that Holdren would mention "climate change" or anything of the sort but he was decent enough to avoid such extremely decadent acts so I am still watching NASA TV at this point. ;-)

The nationalist atmosphere was extremely different from the international atmosphere at the LHC. CERN loves to celebrate how much international it is; NASA never forgets to point out it is a U.S. project, funded by the U.S. taxpayers (lots of fun for $7 per American, indeed!), and America is the leader in all those curiosity-driven technological feats. The fact that almost all the rocket scientists are citizens of the same nation and they may have the same blue shirts adds another layer of motivation, I am sure. It would work in another nation, e.g. if the blue shirts were replaced by brown shirts, as well – but in the real world today, only America could realize such a Mars landing project, I think. 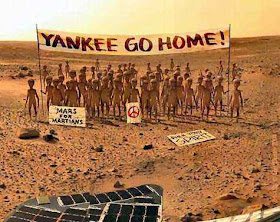 Although I may sometimes be infected by a nationalist or international propaganda, I always return to rational attitudes soon and I am simply neutral on whether it is more "cool" when similar achievements are done under the leadership of a single nation or in diverse international collaborations. Well, I still think it's more natural if those things are done by a single nation. Some degree of national pride and competition helps, too. The real reason why the LHC has to be such a heavily international project is that no single nation really had enough courage, expertise, resources, and curiosity lust to realize the project without the aid from others – and this explanation isn't a real reason for pride, is it?

And if it is the communication between people of different nations that should be celebrated, I certainly don't find it as impressive as the ability of humans in any nation or nations to send a one-ton vehicle to a different planet 14 light minutes away and perform all the maneuvers to decelerate from 10+ km/s to zero (well, to 75 cm/s vertically and 4 cm/s horizontally).

The Curiosity Rover is the first NASA Mars astrobiology project since the 1970s and just the fourth or fifth successful landing on the Red Planet after Pathfinder (whose Sojourner rover only worked for 2.5 months in 1997), Spirit (2004-2010), Opportunity (2004-present, the ultimate survivor), and perhaps the Phoenix lander in the Mars Scout Program (2008); Soviet Mars 2 and Mars 3 projects failed in 1971 while U.K./ESA's Beagle 2 was lost around Xmas 2003 and numerous other Mars expeditions have been doomed well before they approached Mars' surface. The prevailing Mars failures are due to the Martian Curse by the Galactic Ghoul, if you need to know the exact name of the culprit.

It would be cool if some stunning insights about life came out of the mission; however, I don't really expect this to happen. If Mars has some connections to life, it's probably in the future and we will have to help such a future to become reality.

MRO's leaked image of the parachuting Curiosity (MSL). Click for a bigger one.

NASA has continuously operated rovers on Mars for 8 years at this point; Curiosity should add at least 2 years according to the plan (it depends on no consumables or "resources"; for example, if you care about energy, it uses the MMRTG system by Boeing to get 100 Watts of energy via heat from decaying plutonium-238 whose half-life is 88 years: no solar panels) but people are secretly ready for a much longer time. These expectations have surely strengthened after NASA learned that all of Curiosity's engineering parameters are within the expected ranges: the device seems to be perfectly healthy right now.

So good luck, NASA's Curiosity as well the human curiosity, and congratulations to NASA, the U.S., and the homo sapiens species.
Luboš Motl v 9:07 AM
Share