The "aromatic" papers by Li, Maxin, Nanopoulos, and Walker have been discussed many times on this blog. They have a new preprint today,


Once again, they update their best fits involving their favorite stringy inspired supersymmetric grand unified scenario, the \({\mathcal F}\)-\(SU(5)\) models, and announce that the recently measured data and tiny excesses could be mutually consistent and suggest the looming discovery of several new effects.


In that framework, one is led to include new vector-like matter multiplets, the "flippons". In the newest paper, these particles are a bit lighter than before, perhaps closer to \(1\TeV\) or even their best fit \(700\GeV\) than \(3\TeV\) if we mention their typical interval for the flippon masses. That allows them to argue that the Higgs mass should be \(125.5\GeV\), the average of the CMS and ATLAS observed values. The lighter "flippons" contribute greater loop corrections that raise the original value of \(124\GeV\).

\] Forgive me bigger fonts in the displayed equations. I want all the double subscripts below to look great – and I want to show you how beautiful the \(\rm\LaTeX\)-produced mathematical equations and fonts are. Two such LSPs could pair-annihilate into \[


Their best fit – and again, I am afraid that what they're doing is the sin of overfitting – implies a gluino and light stop with masses\[

\] which isn't exactly the "very light stop squark" (like one employed by Hooper and Buckley) but it should also gradually become visible in the 2012 data if the stop is really over there. The stop decays mostly to the top quark and the LSP.

Their scenario doesn't have to be correct – I am really not promising you it's correct, especially because I carefully observe the status of several other "specific enough models" which make slightly different predictions. But it could be very well correct, too.

If that's true, we should expect not only some groundbreaking discovery at the LHC soon; there would be other consequences for the experiments. A clearer evidence for the \(130\GeV\) gamma-ray line could strengthen the picture. But there is one more effect we often neglected in recent years: the proton decay. 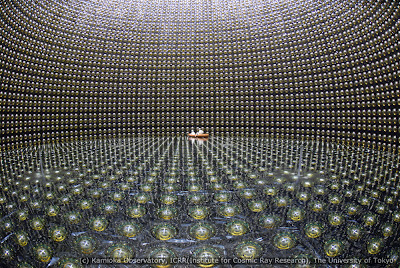 The simplest grand unified model would predict the proton lifetime something like \(10^{31}\) years which would soon be falsified. Georgi and Glashow only dared to suggest the simplest model and when they were slapped in face by Nature, they immediately left the program. Other people concluded that the idea of grand unification is way too precious to be abandoned this easily; they constructed more nonminimal models that are compatible with the experiments. But they still have to struggle to remain compatible. The current lower bound on the lifetime set by the Čerenkov detector of the Super-Kamiokande lab is something like\[

\] A funny thing about their preferred point is that the predicted proton lifetime could be just a little bit higher than that,\[

\] So the proton decay could be seen rather soon. Well, I think it should already be a bit worrying for them that it hasn't been seen yet; a simple way to justify this assertion of mine is to say that a \(1.4\times 10^{34}\) years lower bound at the 95% confidence level is probably equivalent to a \(1.8\times 10^{34}\) years (that's not an exact number, just an estimate to sketch a concept) lower bound at the 80% confidence level so at this reduced level of "certainty", the "best fit" figure predicted by these four authors has been falsified, too. I must mention that in this model, the dominant decay channels for the proton are\[

But even though I think that they overestimate the importance of some small excesses and their fits are overfitting (they are effectively fitting the noise i.e. trying to find a deep explanation for something that is likely to be just a coincidence) and they may even exhibit some bias towards "physics right behind the corner", something I have often criticized and something that's been largely invalidated by the first year and a half of the serious LHC data, such a model would not only be extremely far-reaching in physics but the probability that it is valid seems sufficiently high to me to justify several articles on this blog.