Most of the otherwise rational German nation was scared by the Fukushima non-disaster and decided to close all of its nuclear power plants by 2020 or so.

Germany is also at the top of the fight against the CO2 emissions so both major sources of electricity seem to be doomed. So far, the doom is hypothetical because the policies have actually led to an expansion of coal power plants. But we may imagine that Germany gets really serious about its drinking of the Green Kool-Aid. 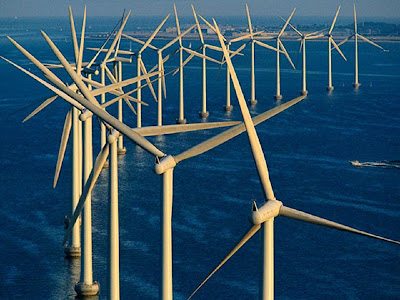 Yesterday, the German government approved a plan to speed up the construction of offshore (i.e. on-the-sea) wind power plants, see e.g. DowJones/WSJ. What does the decision mean? Is it wise?


First, let me shock some full-fledged skeptical readers of this blog. I actually do think that in a few decades or a century, we will be surrounded by things like offshore wind turbines and solar panels on cars and roofs and all these individual sources of "renewable" energy will be connected to a grid, perhaps wirelessly, and there will be a sophisticated system that will calculate how much money is paid to the energy producers depending on the output and the demand (and expected demand).

To amplify the shock, I do think that it's very intriguing to be using energy that doesn't really depend on any "commodities". If I could buy an energy system that would allow me not to pay any energy bills for 50 years or so, and that would allow to store the energy for some time. I would pay $3,000 for each source of 100 W in average.

The only major problem I have with the renewable energy hype is that the renewable energy is simply not quite competitive yet. It makes no sense to subsidize it. It makes no sense to force people to use and support energy sources that are economically inferior at this moment. It's also unpleasant that the wind turbines kill birds and they look like needless that want to pierce your skin – I don't like to look at sharp things – but these disadvantages are secondary. It's the price that matters.

Imagine that I do agree that in 50 or 100 years, the world will be flooded by similar sources of energy and at the same time, they will start to be economically competitive, perhaps because the price of fossil fuels will have increased. Doesn't it make sense to build them already now, even though they're not competitive yet? My answer is a resounding No. Because it only takes a few years to build such wind farms, it only makes sense to build them a few years before the moment when they become economical. By waiting for this moment, you save for electricity itself; and you save once more because the wind power (or solar power) technology is getting more efficient, advanced, and cheaper, so the more you wait, the better product you get.

I think it's almost guaranteed – because of the newly found reserves of fossil fuels – that this moment won't arrive in the next 50 years. So it's nonsensical to build many such wind farms today. It is actually surprising that Germany isn't able to figure out these things. West Germany experienced the post-war boom partly because the factories were bombed out during the war which forced West Germany – and which allowed West Germany – to install the most modern machines and technologies after the war. The apparent disadvantage was soon transformed into an advantage – one of the sources of the German competitive edge. It makes sense to wait.

What did the German government proposed to do yesterday? The first sentence of the Dow Jones/WSJ article has an answer:


The German government Wednesday proposed to speed the expansion of offshore wind farms by limiting the liability of power network operators for delays and outages of grid connections.

That's pretty bad! The power network operators won't be fully responsible for something they should be primarily responsible for, e.g. outages of grid connections and delays. It's an obviously ideologically driven distortion of the free markets because for every consumer, the risk of outages actually plays a role when she is deciding about the best way to cover her electricity needs. Now, the power network operators won't be fully responsible for such things. They may lower the quality of their services without too many worries. They're just not fully responsible for their work. It's apparently more important that they're participating in an ideologically driven and economically misguided program to shift to renewable energy sources.

But if producers are not held responsible for their work, the efficiency of the market and the consumer's well-being always suffers. Such distortions of the markets may be harmful in many previously invisible ways. If the program to prefer wind or solar energy were really "inevitable", it would be cleanest to blindly pay a fixed amount of subsidies for each renewable kilowatt-hour and avoid all other random ad hoc interventions.

Now, unless e.g. my homeland becomes a protectorate of Germany again and unless the European unification will really start to resemble the "unification" that Europe experienced under the 1933-1945 German Chancellor, Czechia (and others) will of course not be constrained by the "limited liabilities" imposed inside Germany. If the German offshore wind experiment will lead to increased irregularities of the power or even blackouts and if we will have to work hard or install new things to save our grid, of course that we want to be nicely paid for that. If we're not sufficiently paid, we will just cut the German grid off and be sure that it would be a problem for Germany already today – and their dependence on the neighbors will be getting worse if they increase the percentage of wind energy in their mix.

The Dow Jones/WSJ article estimates that the electricity prices in Germany will grow by something like 10 percent from the current value around 20-25 eurocents per kWh during the next 8 years. Of course, the price will depend on many other factors as well so this surely can't be trusted as the final result. I think that a 10% increase wouldn't be catastrophic. You pay just a few dozens of dollars a month for your electric bills; but you shouldn't forget that many other products you're buying also depend on cheap electricity and they could get more expensive, too. Still, a 10% jump isn't catastrophic (but if 10% applied to all prices, it would be horrible – a one-time 10% hyperinflation). On the other hand, this 10% increase only corresponds to a minor increase in the role of the wind energy. If Germany wanted to get all the energy from wind farms, the price would be vastly higher.

Suggestions that nations should switch to "renewable" energy sources are omnipresent but it's actually extremely hard to find cold hard numbers about the expenses you have to pay to construct a 1,000 MW source of wind energy, the lifetime, and so on. It seems clear to me that these numbers are not being publicized simply because these cold hard numbers are not flattering for the "renewable" energy sources. People are maximally encouraged not to think or to think irrationally and ideologically. It shouldn't matter to you how much you pay.

Well, it surely matters to me and I will fight with all the weapons I can find against those super-arrogant individuals who would love to tell me what should matter to me. In a free society, each of us is free to sort his or her priorities. In a free society, everyone is allowed to assign any "subjective price" to various market products. Above a certain price, we wouldn't buy or use electricity for certain things. Most of us think that the market price of Al Gore is about $200 because the price of pork is around $1 per pound. It's utterly scandalous if someone suggests that we should believe that the price is any other number.

So I think the only acceptable attitude of the government is to acknowledge all the advantages and disadvantages of individual sources of energy and the companies' and individual consumers' right to quantify these advantages and disadvantages. Subsidies for "ideologically preferred" sources of energy are as pernicious as the attempts to take the responsibility for the disadvantages away from the producers of energy and the grid operators. Those things shouldn't happen in an ideal world because they're pretty much guaranteed to make the world less efficient, to make the people less wealthy and less happy.

The Czech trade minister wants to reduce renewable energy subsidies and replace them with type-of-source-blind insurance against future changes of the electricity prices which is important or useful for any long-term economic planning of the construction of new energy sources (including nuclear power plants) but which is fiscally neutral for the state budget in average. That sounds sensible. After all, we're forced to think about these things; just in our medium-size country, the 2012 subsidies just for the renewable energy are going to stand at $2 billion. That's one-third of our budget deficit or 1% of our GDP!

And the renewable energy is still just a few percent of our total energy production.

We may express those $2 billion in renewable subsidies in one more useful way: it's 3% of our $60 billion annual state budget. So 3% of our budget has to cover subsidies for renewable energy sources that only represent 10% of our electricity production. Relatively to other nations, 10% is a very large number so in this hysteria, we joined the "elite club" of the most insane "leaders". However, you must realize that much of this figure (8,500 GWh in 2011) of 10% comes from the hydroelectricity (2,000 GWh) – which is also counted as renewable – whose capacity can't be increased too much anymore (and the hydroelectricity production has been constant at least for 7 years) and which is probably not too subsidized, anyway. A comparable amount came from "biomass"; this is no longer fashionable so it won't increase.

If you count solar (2,200 GWh) and wind power plants (0.6 GWh) only, they produce 3% of the Czech electricity, despite our being co-leaders in that discipline, and these two sources probably grabbed almost all the subsidies. To mask the price increases from the wind and solar energy which represent 3% of the electricity production, they pretty much swallow 3% of the state budget. It's not hard to see that if we wanted to have 100% of the energy coming from renewable sources, the subsidies would require approximately 100% of the state budget. In a green world, tell good-bye to the state-subsidized education, healthcare, pensions, defense, and other obsolete details. ;-)

It's just an order-of-magnitude estimate showing that the transition to renewable sources of energy may eat pretty much all of your nation's wealth – without any improvement of the quality of your life or your environment or anything else that matters whatsoever. If you only switch a few percent to the renewable energy sources, it will only eat a few percent of your wealth. But it's still stupid to waste the money in this way even though it's less stupid than to waste 100% of your wealth. These are huge amounts of money. The governments of the world feel that they have the right to waste tens of billions of dollars for completely worthless rubbish as long as it has the right ideological color. That's one of the reasons why citizens of democratic countries must very carefully watch the stupid and arrogant policies that the governments are adopting.
Luboš Motl v 1:42 PM
Share