Grid, Internet will go out of business; satellite, automatic invisible airplanes will complete the job; automatized shock-and-awe conflict could take 30 days and lead to 500-5,000 casualties only 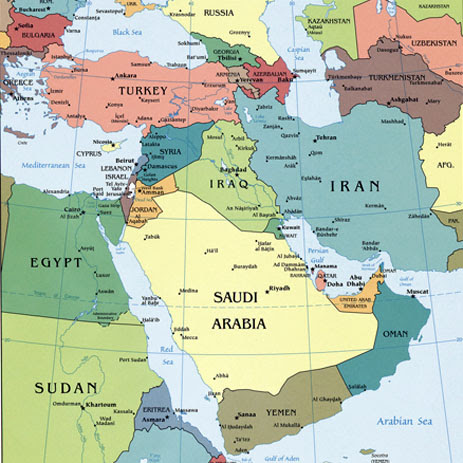 Let me admit that in the recent week, I was spending at least one hour every day by reading news about the escalated Iranian-Israeli tension and the possible Israeli preparations for a conflict. If you don't follow the situation closely, let me say that (Israeli PM) Benjamin Netanyahu and (Israeli defense minister and trained physicist+mathematician+economist) Ehud Barak seem to be ready for a strike against Iran.

Or at least they are trying to make everyone believe that it's their plan and it's their mood.


The debate about the strike in Israel is unprecedented right now; see thousands of recent articles about the topic. It seems clear that this "promotion of the concept" is pretty much driven by Netanyahu and Barak themselves. They seem to be successful as the opposition to the war within Israel seems to be diminishing.

No one knows for sure whether they're bluffing. Even though a similar "war talk" has been around for years and it hasn't been transformed into reality (yet), it has already helped to impose unprecedented sanctions against Iran – sanctions that actually make a difference. Nevertheless, they are not effective in their main goal to stop Iran's enrichment of uranium to insanely high level whose only sensible explanation – given the multi-billion losses that Iran has to experience due to this activity – is the desire to ultimately announce the construction of an Iranian nuclear bomb.

Both peace in fear as well as a war could be good or bad for the two leaders, for Israel as a country, and for the world. Iran officially says that the threats are stupid and Israel wouldn't have a chance. However, it seems clear that the mullah-in-chief (I don't mean Obama), Ahmadinejad, and lots of others have to replace their underwear many times a day (I sincerely hope that at motls.blogspot.ir, the Iranian edition of this blog, mine is a sufficiently politically correct way to describe the two bigots' feelings). The Iranian propaganda – see e.g. Fars News and Press TV – is running at war frequencies. The reoccupation of Jerusalem is the main task for the Islamic countries' regimes, we hear (in Islamic English, "freedom of Quds is the main cause of Muslims"), Iran is safe, Israel is stupid, the U.S. and Britain and Israel will be sued, and so on.

All sensible analysts seem to agree that the period before the November U.S. elections is ideal for a strike and things will get much worse afterwords because the U.S. presidential candidates can't afford to look like guys who are ready to sacrifice an ally and face a de facto military loss; on the other hand, U.S. presidents are unlikely to strike in the first year of their term (whoever wins). It's not clear whether the U.S. would join Israel (and it's not clear whether Iran would try to attack U.S. targets if attacked by Israel) but the semi-officially released information in Israel indicates that Israel is ready to act alone.

So what is this hypothetical strike going to look like? Richard Silverstein, a Jewish American blogger, is probably an anti-war guy and he knows two anti-war officials in Israel (one in the military, one is a veteran in previous governments) who released an interesting document because they believe it could stop the war engine. The document may be interpreted as a promotional booklet trying to sell the planned strike as a clean wonder of modern technology. It's plausible that Netanyahu and Barak are only looking for one more minister to join the pro-war side and then they will be able to press the button. And yes, I personally find the booklet intriguing, indeed. Of course, I would probably be thinking a bit differently if my homeland were the "audacious [and therefore threatened] one".

First of all, the document corrects the idea about the "localization" of the strikes I was often thinking about. The idea is that Israel can't afford battles on the ground etc. so it will try to bomb the targets in an extremely localized, surgical way – something we watched at the high school during the First Iraq War in 1990. Well, the document shows that this would probably be an unreasonable strategy. Instead, the planned one-month war envisions a significantly more universal and widespread crippling of Iran's infrastructure.

The first spectacular claim is that Israel would abolish the electric grid, radio, television, Internet, and telephones in Persia with the help of cyber-attacks and the carbon fiber munitions: click the picture above for more information. It's a classified bomb with lots of smaller confetti bombs in it. Each of them opens and spits a huge amount of thin conducting carbon filaments that short circuit the electric wires and transformers and all facilities treated by this otherwise harmless munition have to be completely removed. ;-)

Some of these bombs may get activated after some delay or they may explode when they receive a satellite signal. It could be really hard to fix the grid under such circumstances. Don't be jealous about the Iranian engineers' job in such circumstances. Just think how your life and work would do if the grid went out of business. It wouldn't be easy.

Now, submarines near the Pilsner Gulf (let me choose this politically neutral name to avoid battles about Persian or Arabian Gulfs) will launch lots of conventional missiles that may detonate above the targets or underground. Hundreds of cruise missiles should bring out of business: command and control systems, research and development facilities, and residences of top nuclear and missile apparatchiks.

TecSAR satellite, one of the most sophisticated radars in space, will suddenly fly over Iran and check the status of all the targets. At this moment, airplanes are already flying to Iran and waiting for automatically processed instructions from the satellite in order to abolish the remaining targets that are determined to need extra assistance to successfully go out of business. ;-)

Just to be sure, the Israeli document also says that the airplanes have a new technology unknown to everyone, including the U.S., that makes them invisible. Note that the Stealth U.S. aircrafts are invisible because they have a piecewise flat surface so they reflect the radio waves as mirrors do – only to a specified direction which is unlikely to be detected by the same radar. But I think it's not the only solution to the engineering "invisibility" problem. It's plausible – and this is my attempted invention – that these devices are actually calculating where the radio waves are coming from and what are the right compensating radio signals that should be sent back so that the radar sees nothing. ;-)

This strike plan sounds good on paper – and as a theorist, I actually think that it could be good in practice, too. Many things may break down in the real world, of course. However, with a similar technological advantage, all the conventional power and manpower that Iran may possess could easily turn out to be an awkward irrelevant pile of Goliath's protein that could be ignored and that could easily and quickly lose to the brain-powered David.

This whole plan could be a partial fantasy – similar to some bluffing about the Star Wars in the 1980s that actually helped the Soviet Union in its decision to give up the arms races (and appoint Gorbachev who wasn't exactly hawkish anymore). It could be real, too. I don't have a clue. If I were in Iran, and even if I were a fan of their leaders which sounds somewhat unlikely :-), I would still try to convince everyone to abandon all the research that could be (mis?)interpreted as a path to truly dangerous military technologies.

It may superficially look nice in the eyes of a gullible Iranian mandatory electorate that Iran is able to send some missiles to various places when this is tested under ideal circumstances and when everything kind of works. But believe me, once the Iranian military leaders realize that the strike is ongoing (and the military leaders who also read TRF will be able to think: now the blue-and-white satellite is probably flying above our heads), many things will no longer work. Despite all of its officially pumped self-confidence and arrogance, Iran could quickly turn out to be as weak as a tea and Israel's impressive internal defense could be able to easily deal with the remaining Iranian missiles of despair: Israel claims to deal with almost all of the first 50,000 missiles from Iran. (Israel has introduced a new system of text messages to alert the citizens of missile attacks. Netanyahu picked a new home front defense minister, too.)

And I haven't even considered the possibility that the Pentagon would join. So far, the only assumption that is strictly needed is that Obama won't join on Iran's side. ;-)

Give it up, mullahs and ayatollahs, before it's too late! You will never reoccupy Jerusalem. Nevertheless, you may still be able to save the electric grid in Persia and other, more advanced things that the Shah has brought to you. And in Shah's case, I would be more willing to believe that his plans to use the nuclear energy were entirely peaceful. ;-)
Luboš Motl v 11:41 PM
Share